Memory makers are busy manufacturing DDR5 modules in anticipation of Intel's upcoming Alder Lake launch and AMD's Zen 4 processors. Even though it is still relatively early (Alder Lake is likely releasing towards the end of the year, and Zen 4 in early 2022), the DDR5 announcements are piling up. The latest comes from Asgard, which is owned by Jiahe Jinwei.
If the latter sounds familiar, perhaps it is because you visited us here at HotHardware yesterday—we wrote about two Chinese firms announcing DDR5 memory kits, one of which was Jiahe Jinwei (and the other Netac). It's working on both single-sided 16GB and double-sided 32GB DDR5 modules that operate at 4,800MHz and 1.1V.
Likewise, the folks at ITHome report that Asgard is also readying 16GB and 32GB DDR5-4800 modules. These will feature the same 40-40-40 timings and 1.1V, and are considered entry-level products for early adopters of DDR5. In time, faster kits will be offered, as well as bigger capacities. Exactly when remains to be seen.
That said, Asgard is planning to launch a range of DDR5 memory kits, including both 64GB and 128GB kits operating at 6,400MHz in 2022. Here's the roadmap... 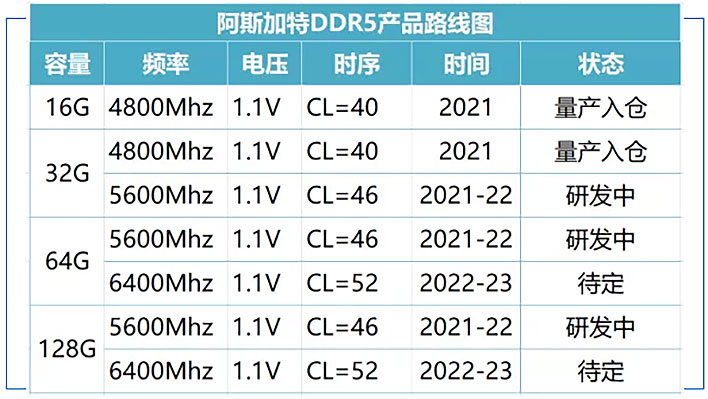 In the more immediate future (as in, this year), much to the delight of Odin, Asgard will release 32GB, 64GB, and 128GB kits capable of 5,600MHz. All three will sport a CAS latency of 46, and all three will maintain a 1.1V requirement, despite the higher frequency. Good stuff.
The official specifications laid out by JEDEC allow for frequencies up to 6,400MHz, which Asgard has every intention of hitting. However, we can expect even faster DDR5 memory kits at some point, just as memory makers blew past JEDEC's official specifications for DDR4.
To that end, at least one firm has its sights set on eventually releasing a 10,000MHz DDR5 memory kit, though no date has been set. That's insanely fast. To put it into perspective, HyperX today announced a DDR4 overclocking record, with a kit of its RAM hitting 7,200MHz with the benefit of liquid nitrogen (LN2) to keep things nice and chilly.
DDR5 will introduce faster speeds and fatter bandwidth. In addition, the specification calls for DDR5 memory to feature on-chip ECC (error correction code) support, which has traditionally been a feature of RAM that ends up in data centers and workstations.