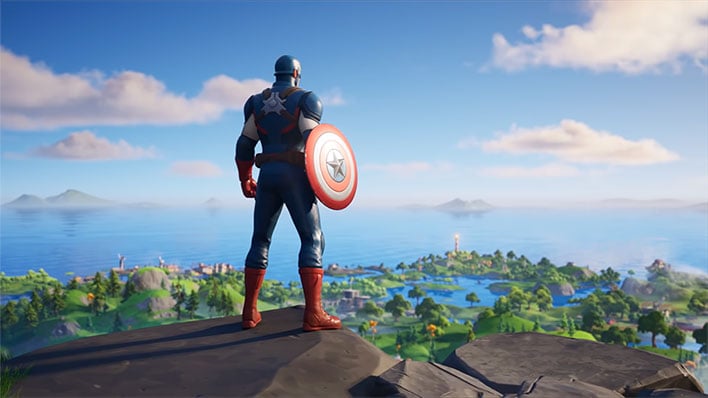 Captain America is the latest in a growing line of comic book superheros to burst into Fortnite, the hugely popular free-to-play game that has made developer/publisher Epic Games a boat load of money through similar tie-ins to pop culture. Cap arrives with his iconic shield, not Thor's Hammer this time, and you can actually use his shield in-game, if you buy the skin of course.
You can display the proto-adamantium shield on your back or wield it as a Pickaxe. When you run with a weapon or item in your hand, like a gun, the shield serves as Captain America's back bling. But when you're empty handed, it transfers over to the superhero's right hand/arm. Over on YouTube, King Mystic offers up a pretty neat demonstration of the shield in action.
And of course Epic Games has uploaded its own launch video highlighting the new skin. Have a watch...
The skin with shield costs 2,000 V-bucks, which works out to around $20 in real dollars. You can also purchase a Grand Salute emote with a fireworks display blasting behind Captain America, for an additional 300 V-bucks. If going all-in, your best bet is purchase 2,800 V-bucks for $24.99.
Incidentally, while this is the first time Captain America has made an appearance in Fortnite, his trusty shield has found its way into the game before. Players could use it as a throwable weapon during last year's Avengers: Endgame crossover event.
As far as superheroes and comic book characters go, there have been several others that came before Captain America, including Aquaman, Batman, Black Widow, Catwoman, Deadpool, Harley Quinn, and Star-Lord.
Captain America's timely arrival comes just ahead of Independence Day in the US. And with that, we'd like to wish our readers a happy and safe Fourth of July weekend!