When And How To Get Fortnite's Deadpool Skin, Almost Time To Make The Chimichangas

Fortnite fans have probably noticed every time new Deadpool Challenges are released, 'Pool's lair changes with items added or removed. Before you can unlock the Deadpool skin, however, players will need to complete all the challenges that have been released. So far there have been 10 of them counting these new challenges. Week 5 Deadpool challenges debuted recently, and now we know when the coveted "Deadpool skin" will be available for players to unlock.

The assumption so far is that once you've completed all the Deadpool challenges, the skin will be available to unlock with one final challenge. After the week 5 challenges have debuted, the hideout changes show Deadpool playing Fortnite on the computer in the lair. The new change to the scene, tipping when the skin will be released, is on the back wall in the toilet stall where a calendar now hangs, that can then be interacted with. 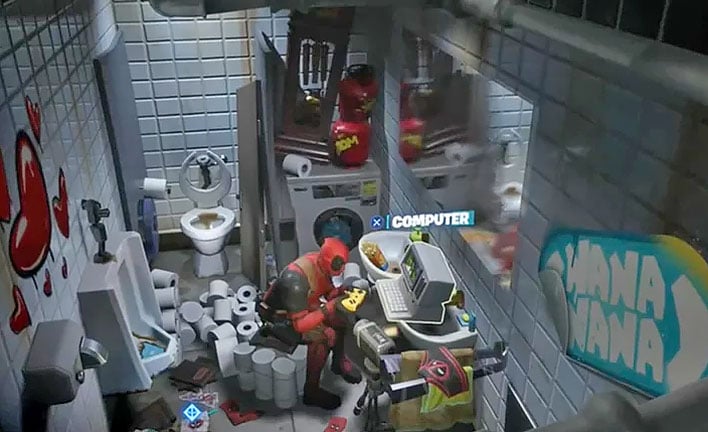 The calendar, seen in the very top image above, has a red circle that presumably shows when the Deadpool skin will be available to unlock. The calendar indicates that the skin will be available in approximately two weeks, once the Fortnite week 7 Deadpool challenges have been completed. So far, the Deadpool challenges had players performing simple tasks to unlock the katanas character back bling. Players also had to find a plunger to help Deadpool unclog the toilet after too many chimichangas.

Once the plunger was found, players had to run around the map to destroy toilets and searching out Deadpool's stuffed unicorn. These challenges have been straightforward and the good news is, for those who haven't tried to complete any of them so far, you still have plenty of time to complete them in order. The first challenge is probably the easiest where players had to find the secret letter to Epic Games.