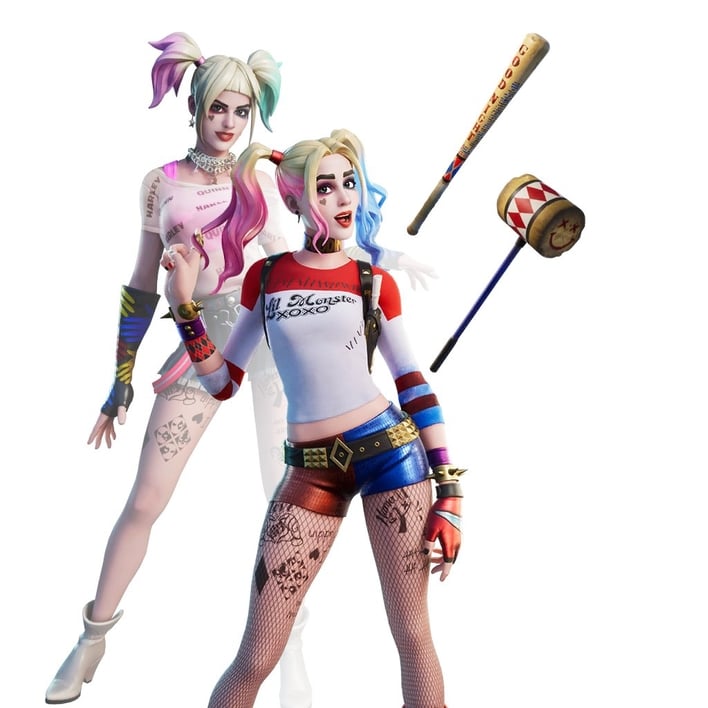 It looks as though Fortnite is about to get some more DC character lovin' in the form of a badass Harley Quinn skin. It should come as no surprise that Harley Quinn would be making an appearance given Epic Games' penchant for including superhero crossovers and the fact that the film Birds of Prey is soon to theaters this week.

In addition to her iconic outfits, gamers can also choose to equip her with a baseball bat or a mallet instead of the standard pickaxe. All of this info comes from famed Fortnite leaker Lucas7yoshi who gleaned the data from game files.

It's highly likely that the new Harley Quinn skin will arrive tomorrow, February 6th. Judging by the challenges that have been uncovered, the outfit in the foreground (image seen above) appears to be the standard version. Completing any of the three challenges below will unlock the outfit in the background:

Harley Quinn will be available to purchase in the Item Shop as part of the 11.5 Update. This update will also bring with it the Unreal Engine Chaos physics system and will bring back the Launch Pad, which was previously relegated to the vault.

There's also a new Love and War LTM just in time for Valentine's Day with this set of challenges:

And here are the patch notes for the 11.50 Update: