Apple shook up the mid-range smartphone market when it launched the second-generation iPhone SE earlier this year. What made the device so appealing – other than its $399 price -- was the fact that it featured a relatively compact design (as afforded by its 4.7-inch display) and a flagship-caliber A13 Bionic SoC (which is also found in the iPhone 11 family of smartphones).

However, Apple’s upcoming iPhone 12 is going to be an even louder shout-out to those that lament the increasing dimensions of today’s flagship smartphones. We already knew that the cheapest iPhone 12 model would receive a 5.4-inch display, but the folks at EverythingApplePro have posted a short clip with a physical mockup of the smartphone compared to the iPhone SE.

People who love tiny phones are in for a treat with the new 5.4-in iPhone. Smaller than a new SE! pic.twitter.com/cTSH2LBzKA

The comparison shows that the new iPhone 12 is both narrower and shorter than the iPhone SE, which is already a rather compact smartphone compared to today’s behemoths. What makes the comparison even more telling is that the iPhone 12 manages to squeeze in an extra 0.7-inches in diagonal display size thanks to its much thinner bezels. 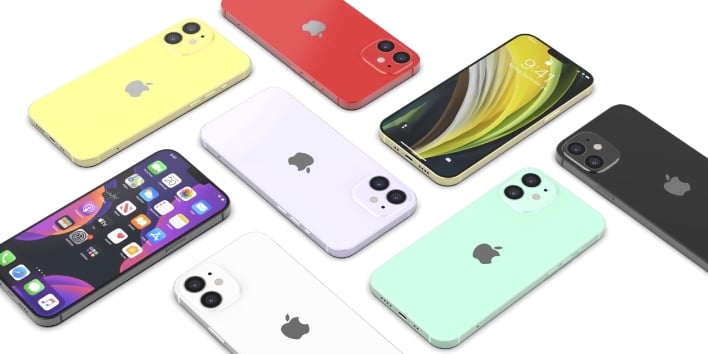 The iPhone 12 also has the advantage of bringing much fresher technology to the table like Face ID (instead of space-robbing Touch ID), an OLED display (versus LCD), [hopefully] larger battery, improved cameras, A14 Bionic SoC (with performance and power savings), and 5G connectivity.

According to previous reports, the iPhone 12 might start at a relatively low $649, which would make it $50 cheaper than the current iPhone 11. The iPhone 12 might not have the expected triple cameras, LiDAR sensor, and 120Hz display that is rumored for the iPhone 12 Pro family, but we have the feeling that the smaller size and $350 cost savings might make it the best-selling model of the bunch.