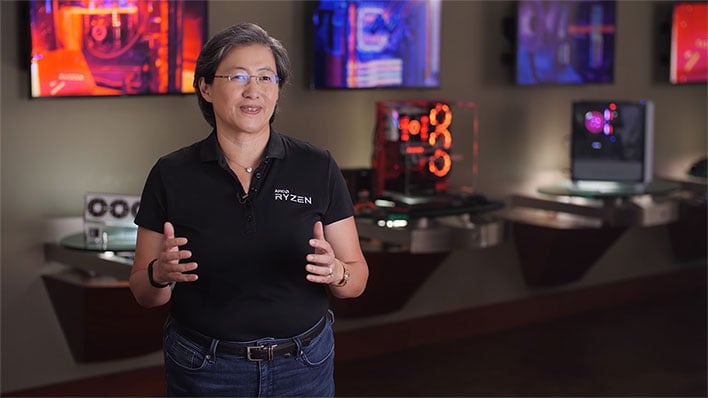 By my conservative estimate, AMD has confirmed its Zen 3 architecture will launch this year around 4 million times. Well, add another confirmation to the pile, to make it 4 million and one. For anyone who is still doubting whether Zen 3 will come out this year or be pushed into 2021, AMD CEO Dr. Lisa Su has once again reiterated it will ship in 2020.
This has been the case all along. My 4 million estimate might be a slight exaggeration, but other than a sketchy rumor that Zen 3 was pushed out to 2021 (which AMD quickly refuted), every indication up to this point has been that it will arrive this year. Multiple roadmaps have made this clear, as well as repeated comments by AMD on the matter.

For anyone who needs to hear it one more time, however, Dr. Su obliged at the end of a new and short "AMD Ryzen Momentum" video on YouTube promoting the launch of the Ryzen XT refresh. Towards the end of the 1min39sec video, Dr. Su gives a quick status update on Zen 3.
"As you know with Ryzen, we're always on a journey. A journey to push the highest performance that we can for our users and our fans. So, Zen 3 is exactly that. Zen 3 is looking great in the labs, we're on track to launch later this year, and I can't wait to tell you more about it," Dr. Su says.
The video as a whole is dedicated to AMD's consumer Ryzen processors, so obviously Dr. Su is referring to the company's upcoming Ryzen 4000 desktop CPUs when she mentions Zen 3 coming out this year (not to be confused with existing Ryzen 4000 mobile CPUs or rumored Ryzen 4000 Pro series APUs based on Zen 2).
We're looking forward to learning more about Zen 3, and seeing how it performs. To that end, AMD has not said a ton just yet. However, we can expect a bump in IPC (instructions per clock) performance and better power efficiency.
As for motherboard support, AMD confirmed Zen 3 will again utilize its AM4 socket. Initially, the company also said support would be limited to its X570 and B550 chipsets, but following a minor uproar from users, AMD came back and said it would extend support to X470 and B450 as well.