Earlier this week, a rumor was making the rounds that AMD could potentially be delaying its Zen 3-based Ryzen 4000 desktop processors until early next year. The basis of the rumor was centered upon a couple of assumptions: 1) that the newly announced Ryzen 3000XT family would be sufficient to sustain AMD’s performance credentials through 2020, and 2) that there was no real [performance] threat from Intel that would necessitate launching Ryzen 4000 processors during 2020.

AMD has now flat-out denied those rumors, and indicates that Zen 3 is indeed on track for a 2020 launch. In fact, the company’s official response was is, “AMD confirms that the rumor on ‘Zen 3’ delay is inaccurate.” So, based on previous commentary and roadmaps from the company, we should expect to see the first consumer-level Ryzen 4000 desktop processors arrive before year’s end, likely sometime during Q4. 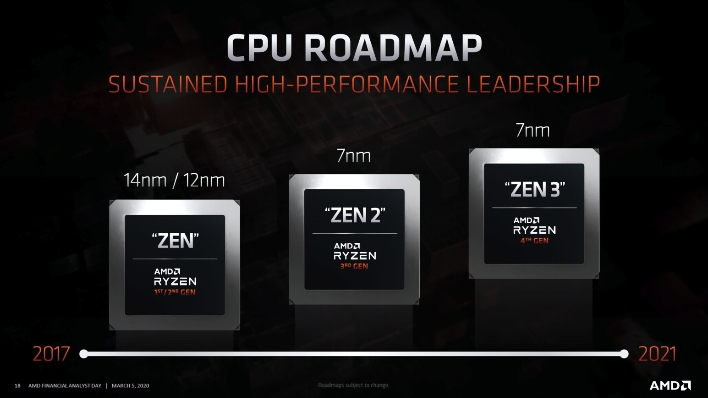 Although it may be somewhat confusing, there will be two separate desktop processor families carrying the Ryzen 4000 designation. Zen 2-based Renoir Ryzen 4000 APUs are expected to launch first, and will be used in entry- and mid-level desktop systems. These chips have integrated Radeon graphics and are similar in architecture to the Ryzen 4000 mobile chips that launched earlier this year.

The Zen 3-based Ryzen 4000 desktop processors that have been the subject of the rumored delays lack onboard graphics and will be based on an enhanced 7nm process node. These processors are expected to bring healthy gains in IPC to further improve performance and put additional pressure on Intel. For those with 500-Series motherboards, these new Zen 3-based Ryzen 4000 processors will support those platforms.

Given that it appears that AMD won’t be easing off the gas anytime soon – something that we already surmised in our previous report – we have the feeling that 2020 is going to go out with a bang thanks to Zen 3, GeForce RTX 3000 (Ampere), Radeon Big Navi, PlayStation 5, and Xbox Series X. We hope that you all are prepared for the fireworks that are coming your way!