AMD is out there living the good life right now, racking up design wins and reaping the rewards of its engineering and marketing efforts. In the first quarter of 2020, AMD raked in $1.79 billion in revenue, which is an impressive gain of 40 percent compared to the same quarter a year ago (albeit down 16 percent sequentially).
After paying the bills, AMD was left $162 in net income (profit), which is down $8 million sequentially but up $146 million from a year ago.
"We executed well in the first quarter, navigating the challenging environment to deliver 40 percent year-over-year revenue growth and significant gross margin expansion driven by our Ryzen and EPYC processors," said Dr. Lisa Su, AMD president and CEO. "While we expect some uncertainty in the near-term demand environment, our financial foundation is solid and our strong product portfolio positions us well across a diverse set of resilient end markets." 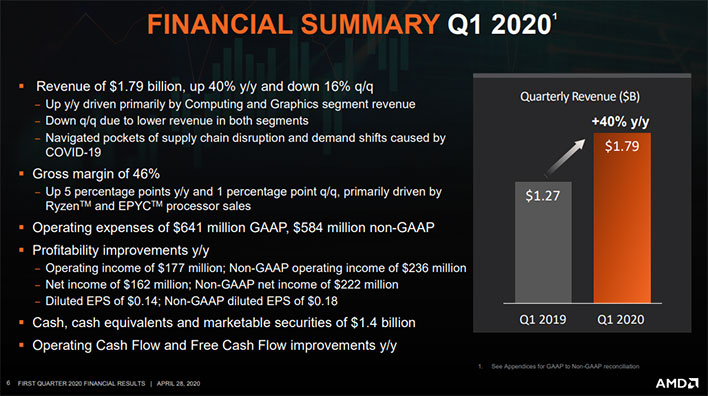 Revenue from AMD's Computing and Graphics segment contributed more than $1.4 billion to the overall tally, compared to $831 million in the first quarter of last year. What makes this even more impressive is that like others, AMD has been contending with the business challenges related to COVID-19.

AMD is poised to have a strong year, not just a solid first quarter. Its latest generation Zen 2 processors are selling well, and there is excitement over the upcoming launch of Microsoft's Xbox Series X and Sony's PlayStation 5 consoles, both powered by AMD hardware. In addition, the first consumer laptops sporting AMD's Ryzen 4000 mobile series have trickled into retail, with plenty more on the way.
Despite all this, investors reacted a bit squeamishly to the results and outlook—AMD's stock is down more than 2 percent at the time of this writing. The company noted there could be a drop in consumer demand in the second half of the year due to COVID-19, though also said it expects full-year revenue to grow by around 25 percent compared to 2019.

AMD also noted that it is on track to launch its Zen 3 CPUs and RDNA 2 GPUs later this year. Zen 3 is expected to deliver a notable increase in IPC (instructions per clock) performance, while RDNA 2 will usher in hardware support for real-time ray tracing for AMD's GPUs, bringing parity (in terms of support) to NVIDIA's GeForce RTX stack.
Exciting things are afoot, in other words, regardless of where the stock price goes in the short terms.