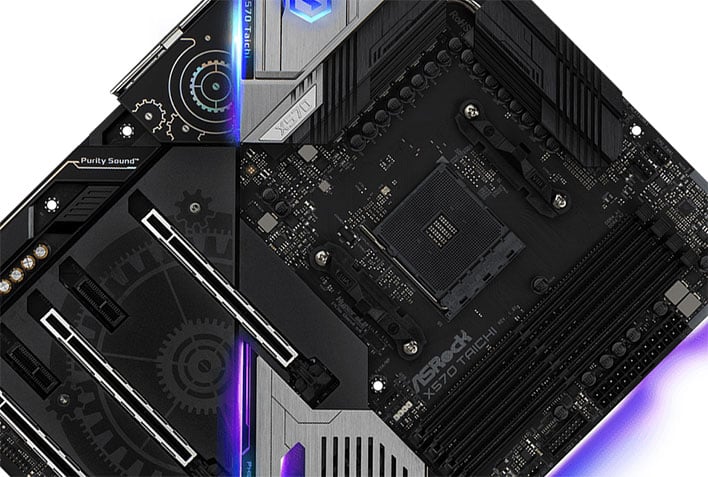 AMD has made a big deal about the longevity of its AM4 socket, and rightfully so—frequent socket changes effectively eliminate or seriously hamper potential upgrade paths when building a PC. The question is, will AM4 extend out to AMD's upcoming Zen 3 processors? AMD said it will, on select chipsets, and even hinted it could beyond Zen 3.
Support through Zen 3 is not a surprise. Even back at the end of 2017, AMD's James Prior hinted this might be case when he told Overclockers the plan was to "support AM4 through 2020 using the existing infrastructure." It was not a foregone conclusion, however, because he was addressing a question about Zen 2.
Lest there be any lingering doubt, AMD just etched its plans in stone.
"AMD officially plans to support next-gen AMD Ryzen desktop processors, with the 'Zen 3' architecture, on AMD X570 and B550 motherboards. This will require a BIOS update. Specific details about this update will come at a later time, but we’re committed to keeping you up-to-date," AMD stated in a blog post. 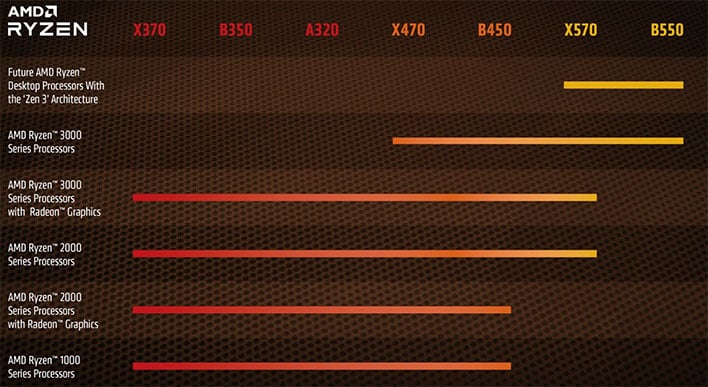 If looking at the glass half empty, this also means that a large chunk of socket AM4 motherboards will not work with Zen 3 processors. Specifically, all older chipsets that predate the X500 series are being left on the sideline, including B450, which was rumored to support Zen 3. In no uncertain terms, AMD said it "has no plans to introduce 'Zen 3' architecture support for older chipsets."
"While we wish could enable full support for every processor on every chipset, the flash memory chips that store BIOS settings and support have capacity limitations. Given these limitations, and the unprecedented longevity of the AM4 socket, there will inevitably be a time and place where a transition to free up space is necessary—the AMD 500 Series chipsets are that time," AMD said.
It might be technically possible for X470 and other older generation motherboards to support Zen 3 with a BIOS update, but it does not look like AMD plans to give its hardware partners the green light to do that on a case by case basis.
This is similar to the situation with PCI Express 4.0. Initially, some X470 motherboards saw BIOS updates that added PCIe 4.0 support, but to prevent customer confusion, AMD told its hardware partners to restrict support to X570 (upcoming X550 boards will support PCIe 4.0 as well).
Hey, you win some and you lose some. What about beyond Zen 3? It's unlikely AM4 will extend to Zen 4, but AMD left the door ajar ever-so-slightly.
"This will depend on the schedule of industry I/O technologies. Such technology changes typically require adjustments to the pin count or layout of a processor package, which would necessitate a new socket. We have no specific details to share concerning this roadmap or timing right now, but we know it’s important to keep you updated—and we will," AMD said.
We wouldn't bank on AM4 stretching out past Zen 3, not unless the market suddenly becomes stagnant. It really just depends on what technologies emerge. For example, there's already a finalized specification for PCIe 5.0, and the PCIe 6.0 spec is on track for 2021.
In any event, if this is the last year for AM4, it was a good run.