AMD's Zen 4 processors that are supposedly launching in Q3 of this year will be the company's proper "response" to Alder Lake (and hopefully Raptor Lake, expected to launch in the same time frame), but in the interim it has a challenger for the throne: the Ryzen 7 5800X3D. When AMD announced the chip back at CES, a lot of people were disappointed that the "X3D" chips were in fact only going to be a single chip, and not a series of same.

However, it makes a lot of sense if you look at what the 3D V-cache gives the processor. Tripling the L3 cache helps reduce the frequency with which the processor has to go out to main memory, and in turn, improves single-threaded performance by improving CPU thread occupancy. In other words, the Ryzen 7 5800X3D isn't technically any faster on a single thread than a regular Ryzen 7 5800X—and in fact, it's slightly slower due to the lower clock rate, which you can't fix by overclocking it, by the way.

In real-world applications, though, the extra cache can clearly make a tremendous difference. We've already seen this with AMD's EPYC Milan-X processors, which see astonishing speed-ups in lots of HPC and enterprise applications compared to their non-stacked-die cousins. Some folks sneered at AMD rushing out a Ryzen 7 5800X with an extra 64MB of cache tacked on as a challenger for Intel's dominating Core i9-12900KS, but those folks may be mistaken.


Peruvian hardware site XanxoGaming is readying a review of the Ryzen 7 5800X3D, and unlike all the other sites that are readying a review, they didn't get their chip from AMD. That means they aren't tied to any review embargos, so they've decided to go ahead and start publishing benchmarks. Most interesting among the results is what appears to be legitimately the world's first third-party gaming benchmark for the Ryzen 7 5800X3D. 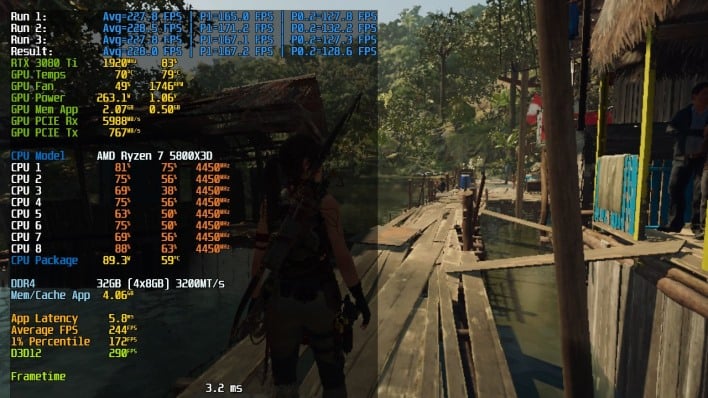 We'd like to get excited over this result, but there are all kinds of reasons not to do so. For starters, XanxoGaming did not perform all of the tests; the Intel side of things was tested by the CapFrameX developer. The two say that they meticulously matched settings, but it's impossible to be sure. There's also the consideration that the two systems didn't use the same graphics cards. The Ryzen system was equipped with a powerful RTX 3080 Ti, while the Intel system outgunned it with an RTX 3090 Ti. Worse, the Ryzen system was equipped with low-latency DDR4-3200 CL14 memory, while the Intel machine used relatively sluggish DDR5-4800 CL40 RAM.


To their credit, XanxoGaming and CapFrameX did test the game in 1280×720 resolution, and that should help minimize the impact the differing GPUs have on the test. Indeed, the Ryzen 7 5800X3D system is actually the one with the slower GPU. You might notice that the benchmarks are putting out some hilariously high frame rates, though. That's because the testers elected to use "Low" settings for the test.


This test is obviously intended to tease out the differences in the CPUs, but with just average FPS numbers it isn't really very illuminating. We would like to have seen 1% lows, which give a better picture of smoothness. With its large cache, the Ryzen 7 5800X3D is very likely to have quite smooth gameplay owing to a reduced number of cache misses (and thus a lower number of CPU stalls as the processor has to wait on RAM or storage.)


Indeed, in a more realistic and more scientific test, with higher settings, a higher resolution, and the same GPU, the average FPS of these two chips would likely be much closer, and that makes for a much less bombastic headline than "Ryzen 7 5800X3D beats Core i9-12900K by 20% in gaming benchmark." The 1% low frametimes could still demonstrate a notable gulf between the processors, though.
Ultimately, this result is still just a single benchmark, which is never enough to go on. More sites will likely be posting benchmarks on or around the April 20th release date of the chip, so we'll know the whole story soon enough.