AMD has gone on record saying it will launch Zen 4 and its accompanying AM5 socket in the second half of this year, and so far has not been any more specific with the time frame. The general assumption has been that we are looking at a late year release, sometime in the fourth quarter. If that's the case, then those plans may have changed, and Zen 4 could be here sooner than expected.
We can't say for sure if AMD has pushed up the release of its next-generation Ryzen 7000 series CPUs (or is trying to), but we can see why it might want to. Intel has not only launched Alder Lake with next-gen features in tow, such as support for DDR5 memory and PCI Express 5.0, but has already fleshed out its lineup with a bunch of new SKUs for both desktop and mobile.
As we saw in our Alder Lake performance review, Intel's latest architecture and its shift to a hybrid model have paid off. And as far as Intel CEO Pat Gelsinger is concerned, Alder Lake put AMD in the rearview mirror for good. That's a bold claim for sure, and one AMD undoubtedly wants to prove wrong sooner than later. 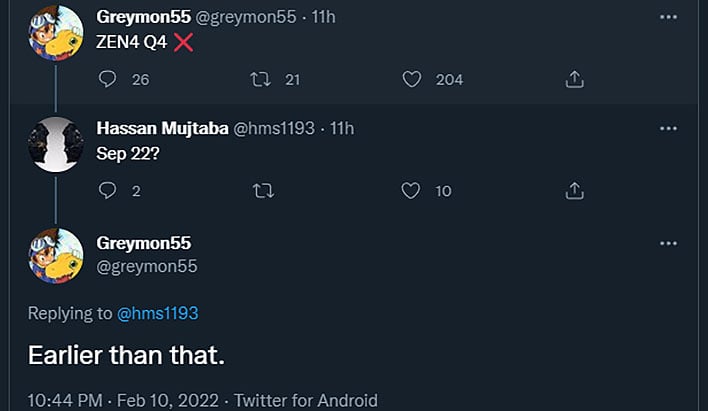 It may get that chance as early as July. According to @greymon55, a prominent leaker in the Twitter space, Zen 4 is no longer bound for a fourth quarter launch. When asked if AMD might debut Zen 4 in September 22, which would be close to the end of the third quarter, they responded, "Earlier than that."
A launch in July (the beginning of Q3) is probably a bit too optimistic, but who knows. It doesn't look like we're getting a complete refresh of the Ryzen 5000 series with stacked 3D V-cache. Instead, AMD during its pre-CES event unveiled the 8-core/16-thread Ryzen 7 5800X3D with an extra 64MB of L3 cache bolted, for a total of 96MB.

No other refreshed SKUs have been announced, and if AMD is accelerating the launch of Zen 4, then it would be easy to see why. The other potential motivation to push up Zen 4's launch would to upstage Intel's Raptor Lake debut expected later this year. Rumor has it Raptor Lake will pack a huge cache upgrade to bolster gaming (and other tasks).
On a semi-related note, AMD ended 2021 with its highest-ever market share of the overall x86 CPU market, at 25.6 percent. That said, it surprisingly lost some ground in the desktop space, where its share fell 3.1 percent year-over-year to 16.2 percent. Getting Zen 4 out the door sooner than later could conceivably make that back up.