If rumors are correct, the mainstream Ryzen 7000 desktop processors will be based on the "Raphael" design. Aside from Zen 4 CPU cores, Raphael is supposed to include a small Radeon GPU in each processor, meaning that for the first time, we'll have mainstream desktop Ryzen processors that don't require a discrete graphics card to be used, just like Intel's.


That integrated GPU is likely contributing to what are rumored to be surprisingly high thermal dissipation requirements for Raphael. We had heard in the past that the Ryzen 7000 series chips would have power ratings up to 170 Watts, despite that they will continue to max out at 16 cores on the top-end, just like the Ryzen 5000 and Ryzen 3000 series. 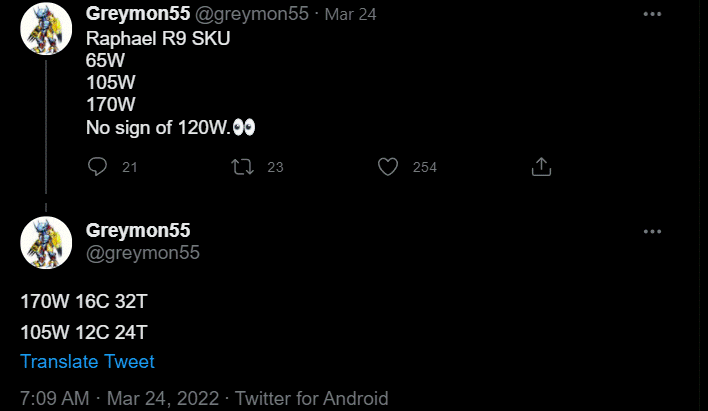 Regular leaker Greymon55 tweeted yesterday confirming that information and also adding that there will be Raphael-based Ryzen 9 SKUs at 105W and 65W, too. The top-end 16-core Ryzen 9 7000-series model, likely called something like "Ryzen 9 7950X", will supposedly carry a 170W power rating, while the 12-core model will apparently come with a 105W design power.

Several replies in the thread remark that it seems like an extremely high power rating considering that extant 16-core Ryzen 9 chips are rated for 105 W. As Greymon55 points out, these upcoming chips have a lot of things going for them that justify the increased power limit, including higher clock rates, the aforementioned integrated GPU, and brand-new AVX-512 support.