The SilverStone Fara B1 can accommodate standard ATX as well as smaller form factor Micro-ATX and Mini-ATX motherboards. On top of that, there's ample room for water cooling radiators at both the top and front ends of the case, as well as room for a graphics card over 12-inches long. Some of these features are common for a mid-range case, but when it comes to water cooling support SilverStone is a step ahead of most cases in this price range. You can see what we mean by looking at the top panel. There are multiple screw holes at the top of the case that make adding radiators and fans of almost any size easier. There are many mounting locations, with screw holes of various sizes, so just about anything can be made to fit.

To test the thermal performance of the case we used stock CPU cooling (as pictured) and only the components included with the case. After the thermal testing was done though we slapped the SilverStone PF240 AIO cooler into the Fara B1 as well. We installed the radiator at the top of the case first, but in the end we moved it to the front. This wasn't because the rad didn't fit at the top -- it did -- but it was hard to remove memory when the radiator was installed at the top, so we decided to switch its position. It wasn't impossible to remove the memory, but we don't like to struggle when removing components, so for us we found the front panel to be a better fit with our particular hardware setup. 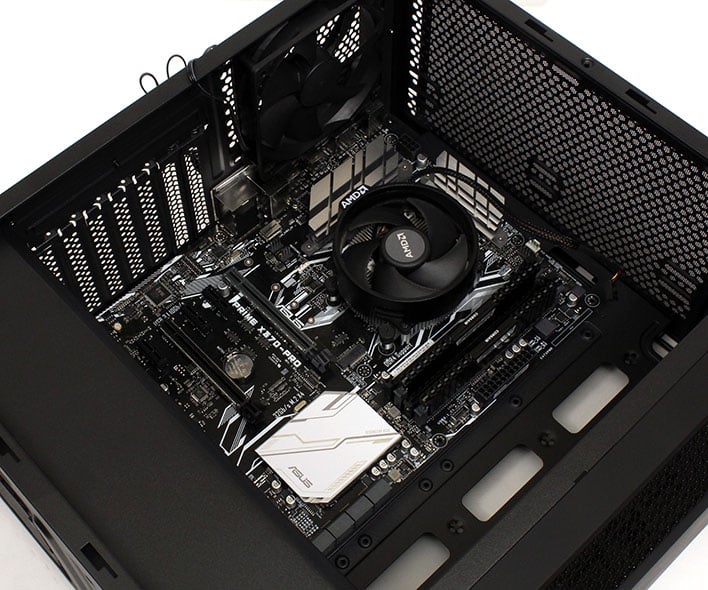 Another nice feature of this case is the sleek shroud masking the lower compartment, where the power supply and all of its cables reside. However, not all shroud designs are created equally. While working in the lower part of the case we ran into some issues we weren't expecting. For our testing we use a EVGA SuperNova 650 watt power supply, which is by no means massive. Installing the power supply in the tight compartment was a bit of a challenge though, which required us to remove the hard drive bay (which supports dual 2.5-inch SSDs and a single 3.5-inch HDD). When the power supply was installed on its own, everything seemed find. Once we started to add our modular cables though, it became clear we weren't going to be able to leave the hard drive bay in the case. Our test system runs a single SSD configuration, so we were able to use the two mounting plates on the back-side of the motherboard tray, but had we wanted to use that 3.5" bay at the bottom, we would have been out of luck.

The lower compartment is also somewhat cramped and some cable routing holes were rendered useless after we installed our power supply. The problem was that there was simply no clearance for the middle cable routing ports to squeeze anything between the motherboard tray, PSU, and the shroud. 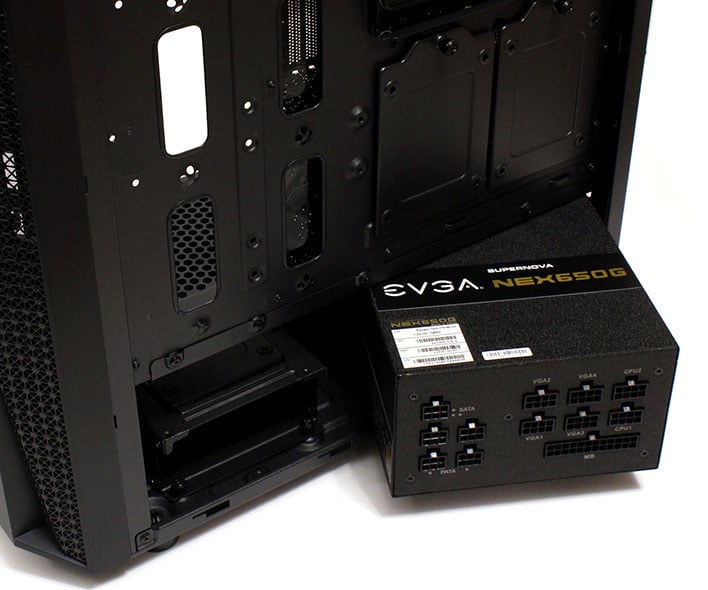 The internal, bottom mounted hard drive bay can accommodate either dual 2.5" SSDs or a single 3.5" HDD. The drives are secured via screws and installation was very straightforward. We aren't going to ping SilverStone for only giving a single 3.5-inch bay, since many enthusiasts have migrated to a combination of M.2 and SATA SSDs in budget builds. However, we are concerned the bay won't even fit in the case after you add some power supplies. 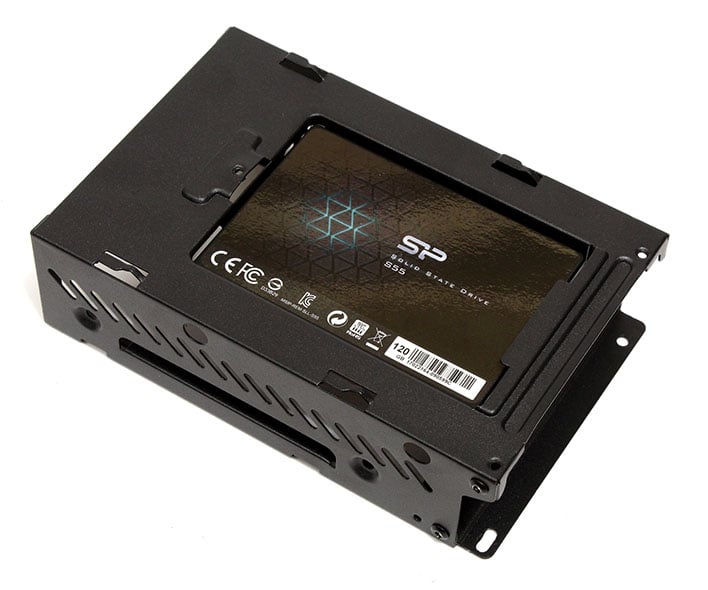 Another minor issue we should point out is the width of the of the power supply bay. We have used our EVGA power supply in a lot of cases and this is the first time it didn't align properly. There was just the smallest of openings along one side, and many may people may just move on. If you're particular about tolerances and clearance though, the gap (visible along the left side of the PSU in the image below) may bug you. 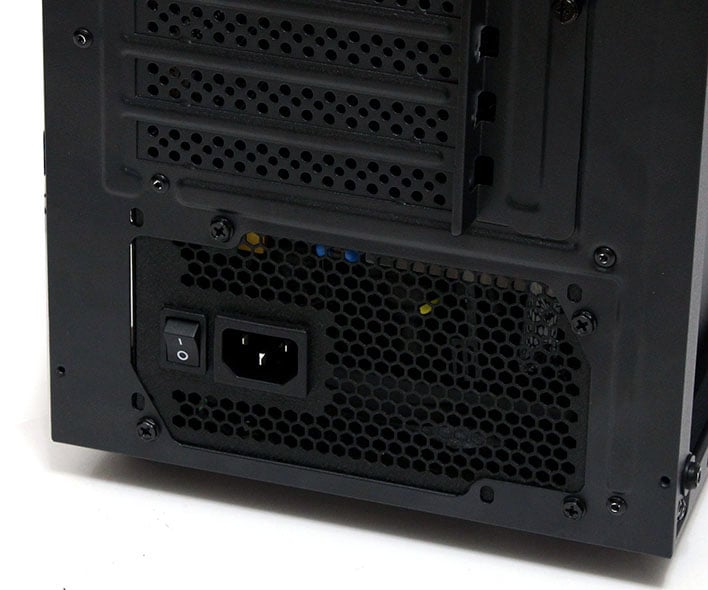 Aside from the issues we ran into with the PSU and drive bays, the rest of the build was a breeze. The mounting plates on the back of the motherboard tray were easy to setup and the CPU retention bracket nicely aligned with the opening. Cable management was, more, or less straightforward. For a $60 case we have to say we were pleased when it came to the upper compartment where the bulk of the components reside. 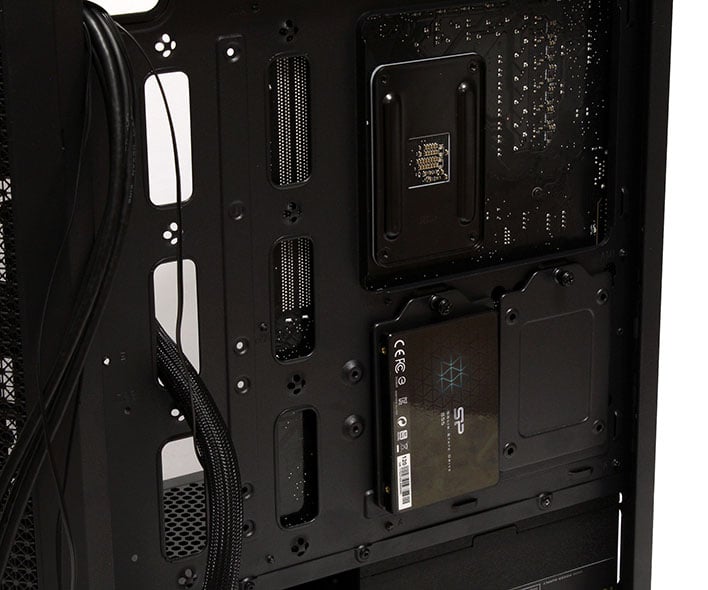 All of our hardware fit with ease. There was plenty of room left in front of the graphics card for a water cooling setup and the cables were easy to route in place. 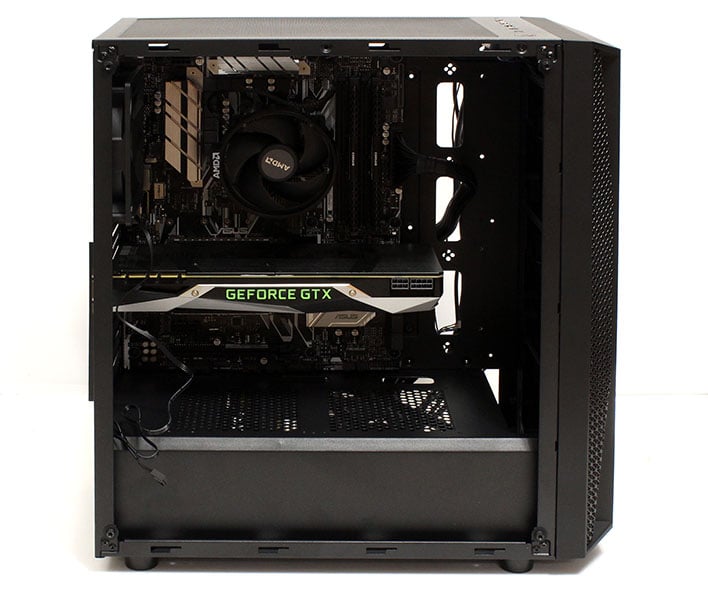 We had our fair share of frustrating moments with the Fara B1, initially. But once we got everything up and running we were impressed with just how good this budget case actually looked. The tempered glass panel really showed off the internal hardware well and despite its limitations, the shroud setup looked good in the end. 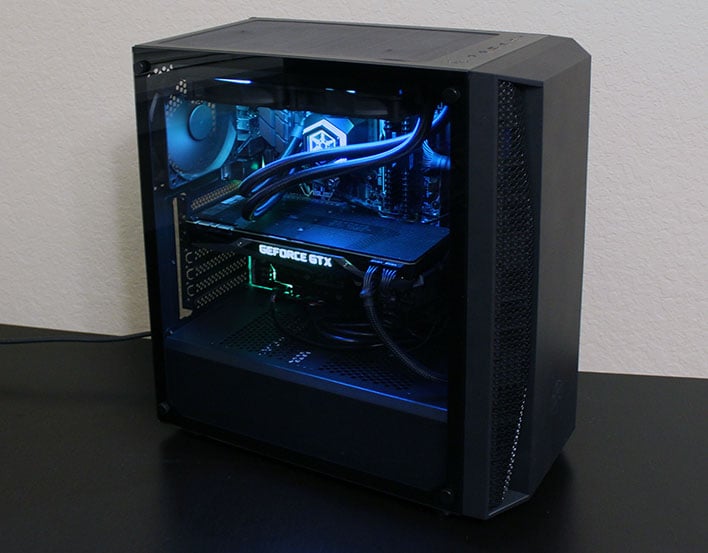 Next up let's see what kind of cooling performance this case has to offer...


Thermal Performance - How We Tested The SilverStone Fara B1:

We focused on three thermal hot zones when testing the cooling performance of the SilverStone Fara B1 case; the processor, the motherboard and the graphics card. To stress the processor and motherboard we used Prime95, and allowed it to run for an hour before logging the results. When it came time to test the graphics card we fired up Furmark and let it do its thing for an hour as well. The Fara B1 is a compact case with only one fan included, so we aren't expecting world class performance. 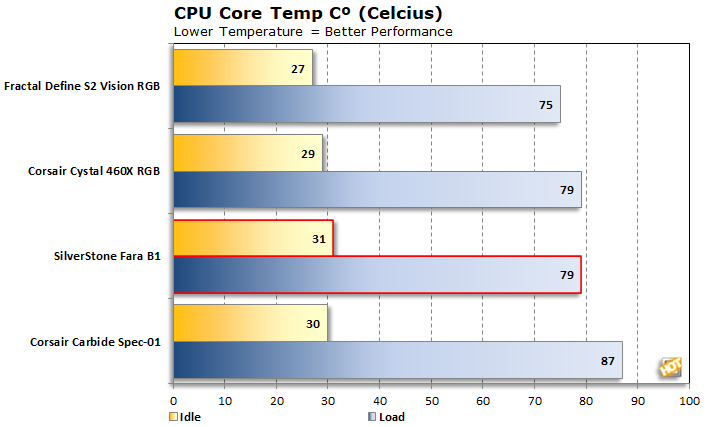 For a budget case the Fara B1 handled itself well. It wasn't able to completely hang with the big boys, thanks to its lone fan, but it still put up some respectable numbers. In our CPU test the B1 managed a near identical score to the Corsair Crystal 460x. A case that is legacy at this point, but in it's day it was over double the cost. 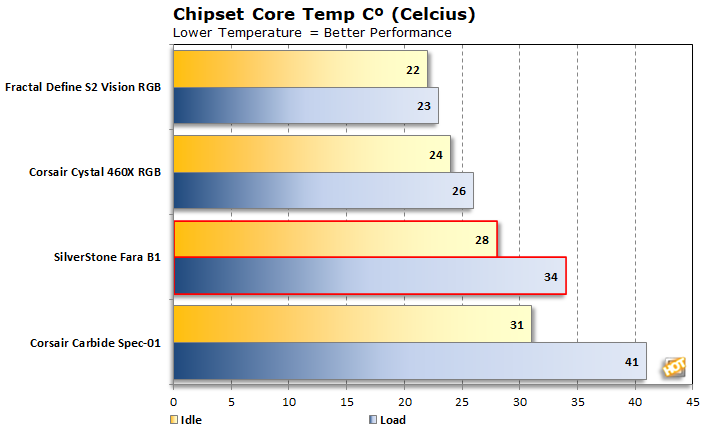 The chipset was the only area of the test where the B1 couldn't match the more expensive cases. Let's face it -- chipsets can get hot and only good airflow will keep their temps in check. The B1 has the potential for great airflow, but seeing as the case only has one rear exhaust fan included, there was just no way it was going to perform at the same level as cases that move more air. Adding some fans would obviously help, but we're testing the case as it ships from the manufacturer here. 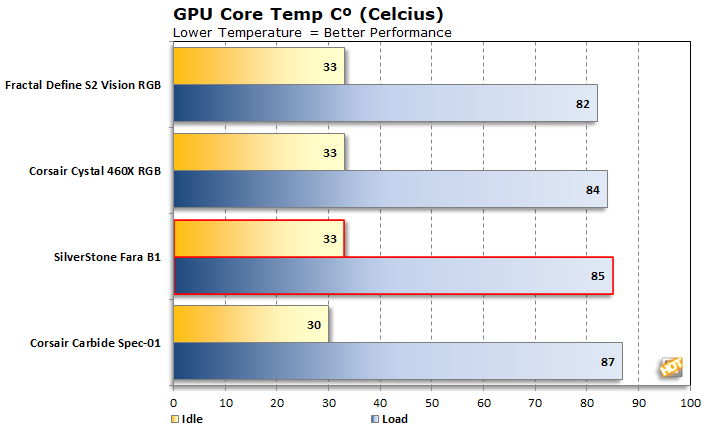 Again solid performance when it came to taming our GeForce GTX 1080 Ti graphics card. Granted this is the test least affected by the airflow in the case, but it was still more thermally efficient than the Corsair Carbide Spec-01, which was extremely cramped after installing all the hardware.

The SilverStong Fara B1's acoustic profile was very good -- the system was quiet and wouldn't offend anyone seated nearby. Then again, how bad can the acoustics be when you only have one case fan? During idle the system was near silent, and any noise the rear fan may have produced was drowned out by the graphics card and processor fans when under load.