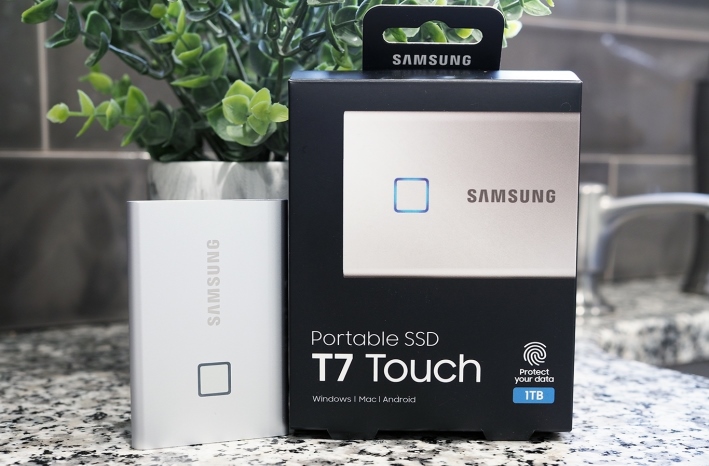 Samsung has been at the forefront of the solid-state storage market for a number of years now. We’re not just talking about its mainstream internal SSDs either, which have been popular amongst enthusiasts. Samsung offers a wide array of solid-state storage solutions, ranging from miniscule microSD cards, all the way on up to monstrous, high-capacity enterprise-class drives meant for big-iron servers. The company has also put considerable focus into its an array of portable storage solutions, to cater to a wide range of users. We’ve shown you many of Samsung’s portable SSDs in the past, including the excellent T5 and super-fast X5 with its Thunderbolt 3 interface. Today we’re going to show you Samsung latest entry, the Portable SSD T7 Touch.

As the ‘T’ branding suggests, the T7 is the follow-up to the T5. The T7 Touch, however, ups the performance and security ante with higher peak transfer speeds and integration of a fingerprint sensor. Take a look at the T7 Touch’s full list of features and specifications below and then we’ll dig in and see how the drive behaved in a number of tests... 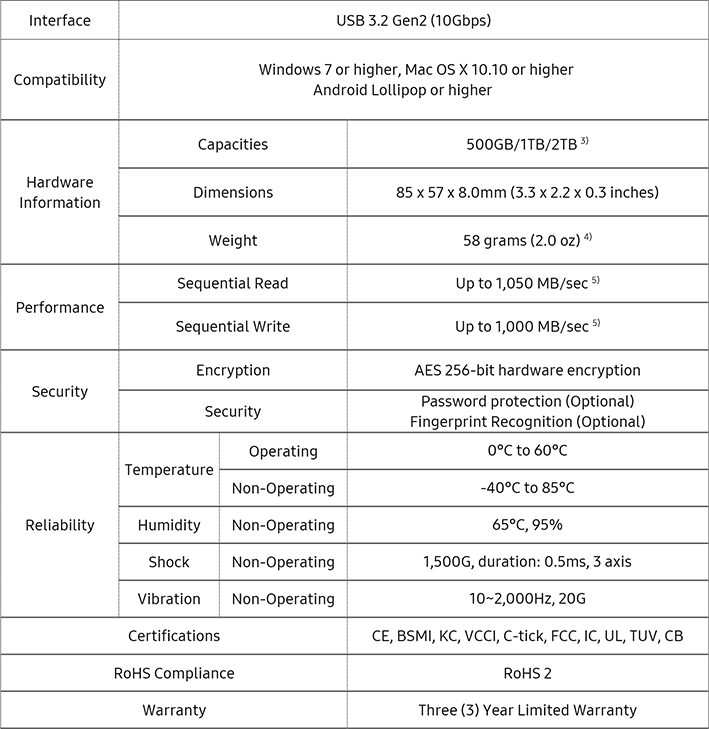 Find Samsung T7 Touch Portable SSDs @ Amazon
Samsung will be offering the Portable SSD T7 Touch three capacities, ranging from 500GB on up to 2TB, in both black and silver finishes – we’ve got a silver 1TB model on hand here. The drives feature a USB 3.2 Gen 2 10Gbps interface (USB Type-C connector) and are outfitted with a proprietary Samsung controller and 5th generation 92-layer 3D V-NAND. That’s an update from the previous-gen T5 which features 64-layer 3D V-NAND. 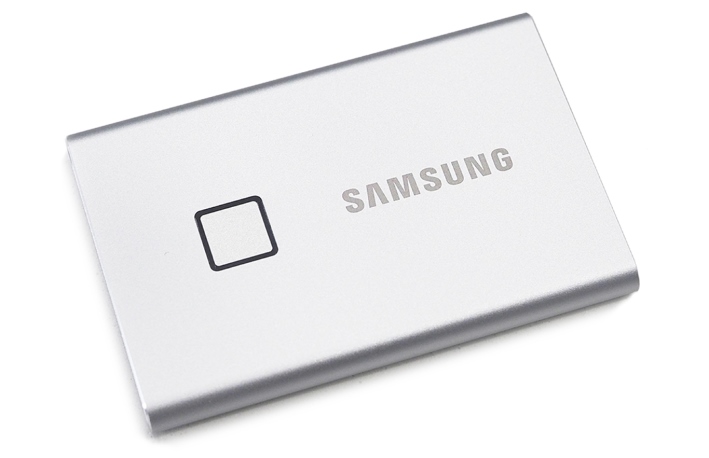 Samsung rates the drives for transfer speeds up to 1,050MB/s (reads) and 1,000Mb/s (writes), which puts performance well ahead of any SATA-based solid-state drive, but not quite on the level of some Thunderbolt-based external storage solutions. We should note, however, that read and write transfer speeds can vary significantly based on the workload, and whether or not the cache is exhausted on the drive, as you’ll see in just a bit. 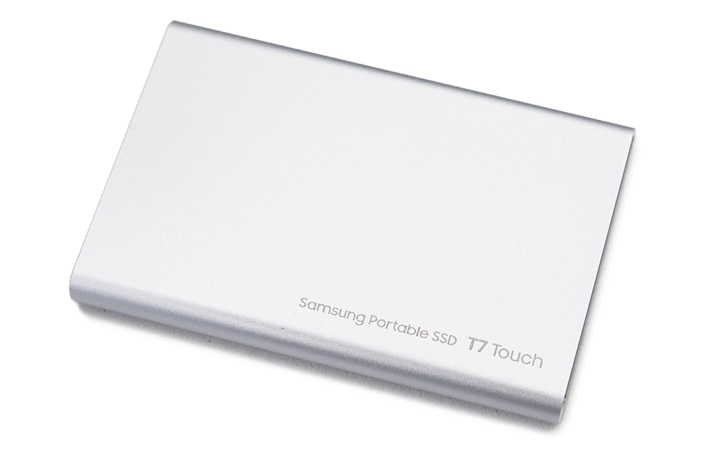 Like the Samsung Portable SSD T5, the T7 Touch has built in support for AES 256-bit encryption, which is enabled through a simple piece of software called “Samsung Portable SSD”. Three versions of the tool are available for the drive – one for Windows, one for Android, and another for Mac OSX. But where the T7 Touch differs from the T5 in the security department is the inclusion of an integrated fingerprint sensor. Whereas enabling security features on the T5 required a password to access the main volume, the T7 can now work with either a password or fingerprint. The level of security offered by the T7 Touch doesn’t meet Federal Information Processing Standards, so the drive obviously isn’t FIPS-certified, but for securing personal files so someone can’t snatch your drive easily access its contents, this built-in security feature should be fine. 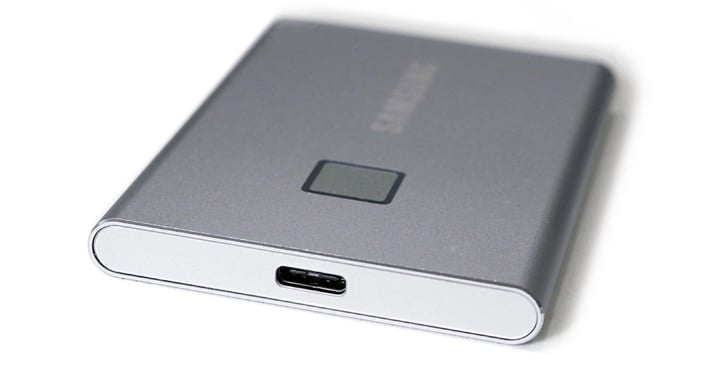 The T7’s enclosure measures 85 x 57 x 8.0 mm, with rounded edges on the sides, and consists entirely of anodized aluminum. That’s slightly thinner, but longer than the T5. At one end of the drive, there is a single USB Type-C connection and on the top, surrounding the square fingerprint sensor, is an animated blue LED that pulses around the sensor to indicate drive activity. At the other end of the drive is model and serial number information. Finally, on the top is a Samsung logo with the fingerprint sensor, while on the bottom, you'll find some “Samsung Portable SSD – T7 Touch” branding.

Overall, the T7 Touch has a clean look and feels durable in the hand, though it is very lightweight at only 58g. The enclosure also provides some level of shock resistance and is designed to improve thermals to minimize throttling and protect the drive’s internals. 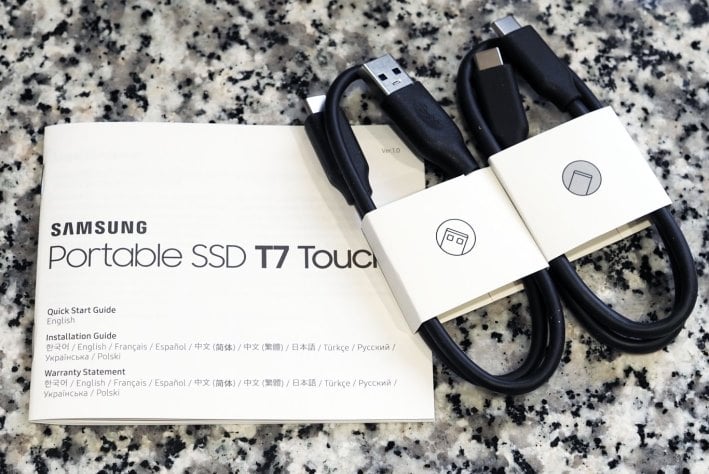 Included with the Samsung Portable SSD T7 Touch is some basic documentation and a couple of cables – a 12” USB Type-C to Type-A cable and a 12” USB Type-C to Type-C cable, which makes the drives compatible with virtually any system, without having to use any adapters or dongles. Samsung's software is included on the drive itself or it can be downloaded from the company website. We should also mention that Samsung warranties these drives for 3-years as well.

Setting Up The Samsung T7 Touch 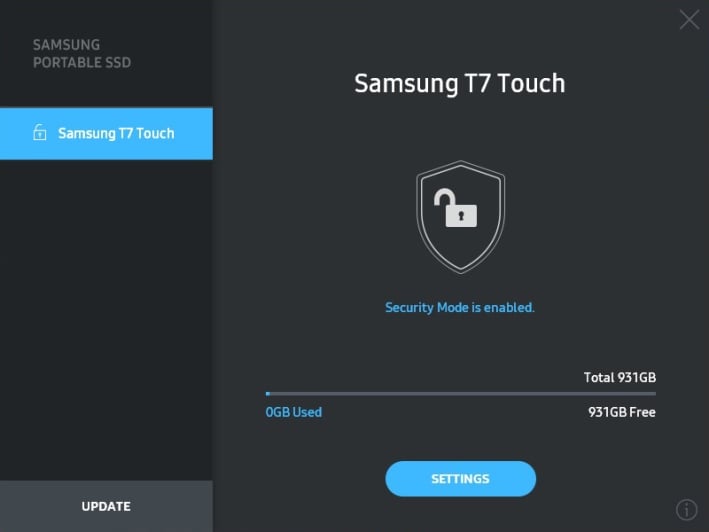 Setting up the T7 Touch (should you want to enable it security features) is quick in easy. Simply install the Samsung Portable SSD app, and upon launching the tool, you’re greeted by a simple Welcome screen. 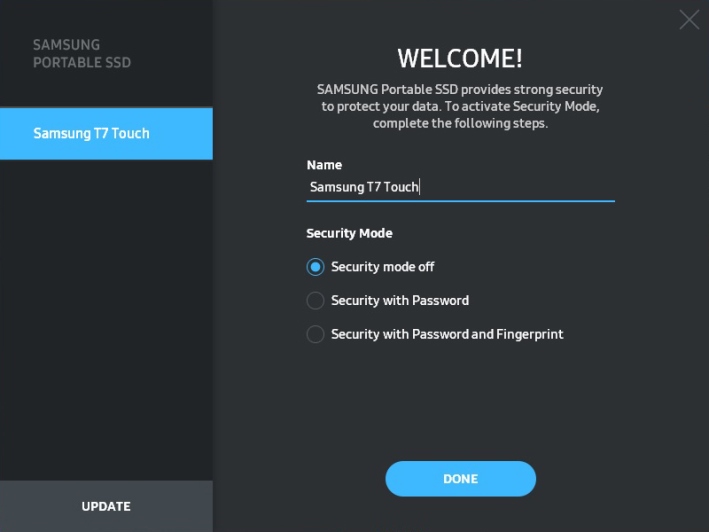 Click the Settings button and you’ll be able to name the drive and decide whether or not you want to enable its security features using a password alone or a password with a fingerprint as well. Should you enable the fingerprint security, you’ll then be asked to position your finger on the sensor a few times so your print can be captured. Once done, you can add other fingerprints or continue, and that’s about it. 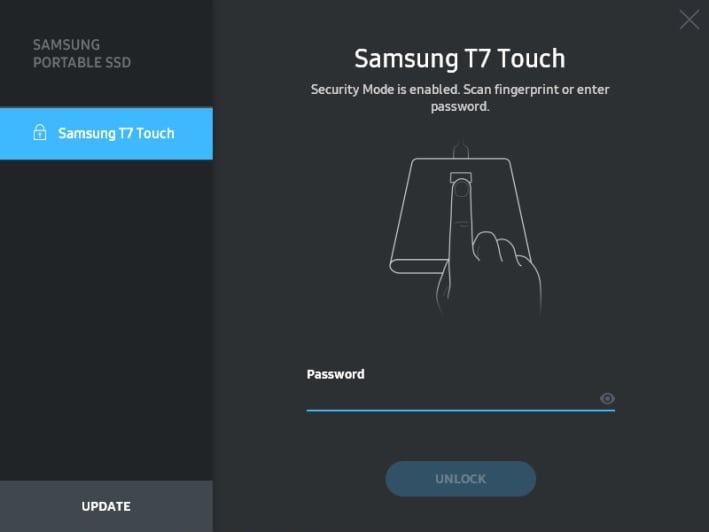 When security is enabled, you’ll be prompted with this screen when the drive is plugged in. Without entering the correct password or scanning the correct fingerprint, the main storage volume on the drive is inaccessible. In practice, we found the fingerprint sensor to be fast and reliable. There were a few occasions where we had to touch the sensor more than once, but we chalked it up to the dry, brittle skin on our fingertips at the moment, courtesy of winter.

How Fast Is The Samsung T7 Touch?

To test the performance of the Samsung T7 Touch Portable SSD, we enlisted the help of a handful of benchmarks and performed some real-world testing. First up, we have some numbers with SiSoft SANDRA, the the System ANalyzer, Diagnostic and Reporting Assistant. Here, we used the Physical Disk test suite and provide the results from our comparison SSDs. The benchmarks were run on unformatted drives and read and write performance metrics are detailed below. 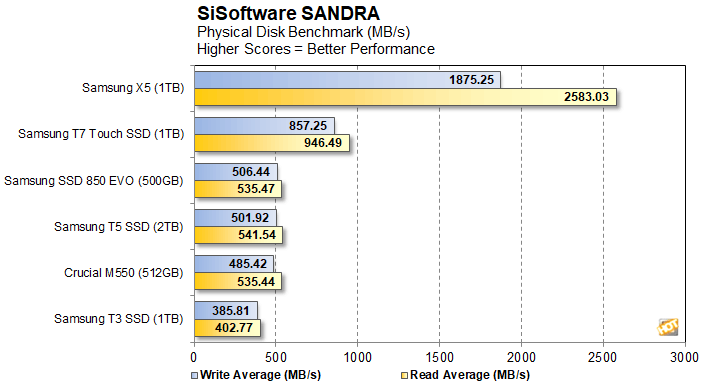 ATTO is another "quick and dirty" type of disk benchmark that measures transfer speeds across a specific volume length. It measures raw transfer rates for both reads and writes and graphs them out in an easily interpreted chart. We chose .5kb through 8192kb transfer sizes and a queue depth of 6 over a total max volume length of 256MB. ATTO's workloads are sequential in nature and measure bandwidth, rather than I/O response time, access latency, etc. 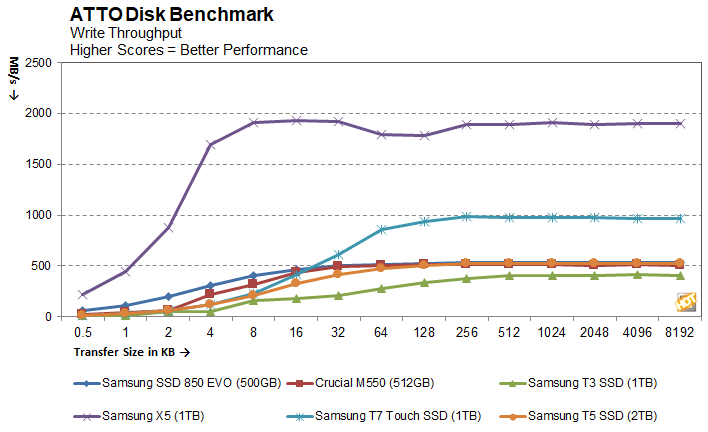 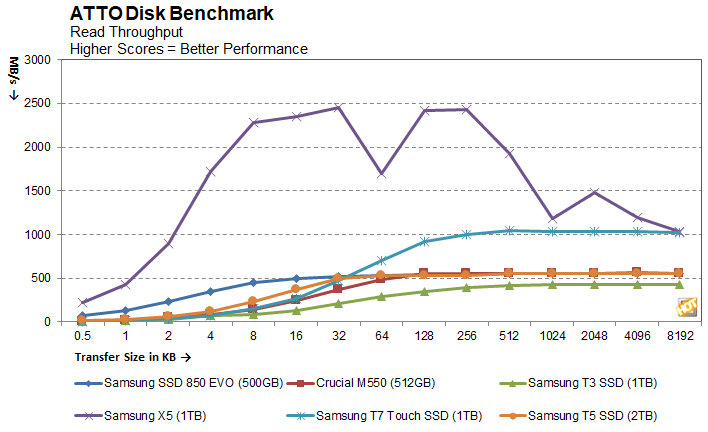 The Samsung T7 Touch lands about n the middle of the pack with the smallest of file transfers, but once it hits its stride at right around the 32K mark, the T7 pulls ahead of everything but the X5 and offers transfers right in-line with Samsung's specifications. 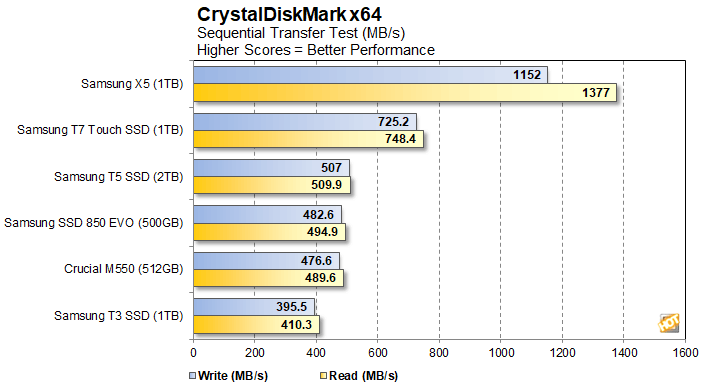 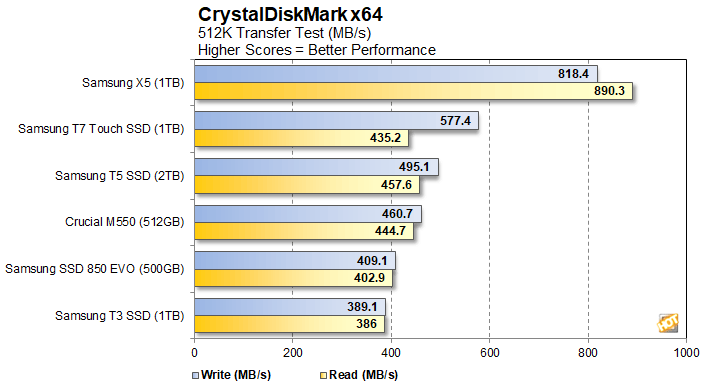 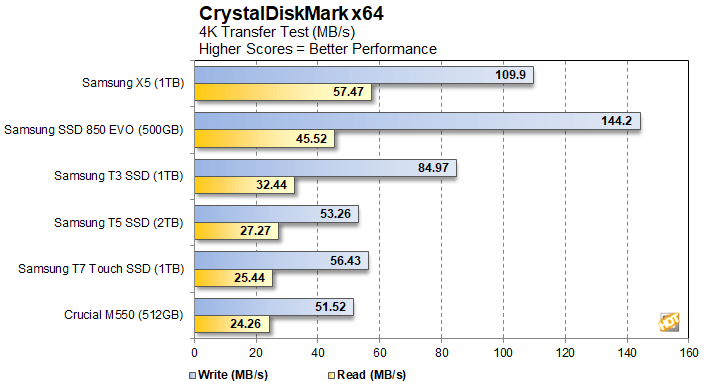 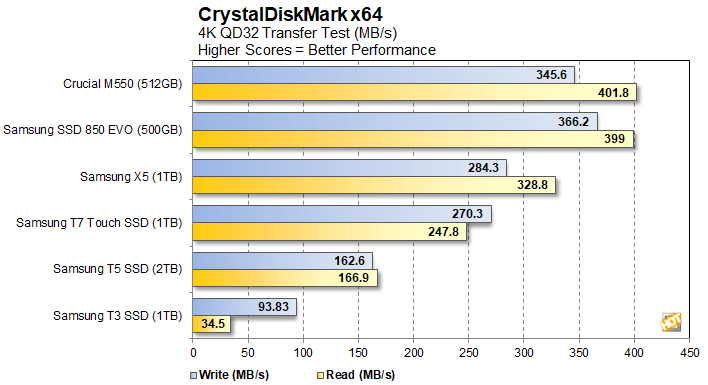 We saw more of the same with CrystalDiskMark. Here, the T7 Touch outran the T5 in all but two read tests. It trailed in the 512K transfer tests and with 4K transfers at QD1, but with the queue depth increased, the T7 jumped well out in front of the T5. 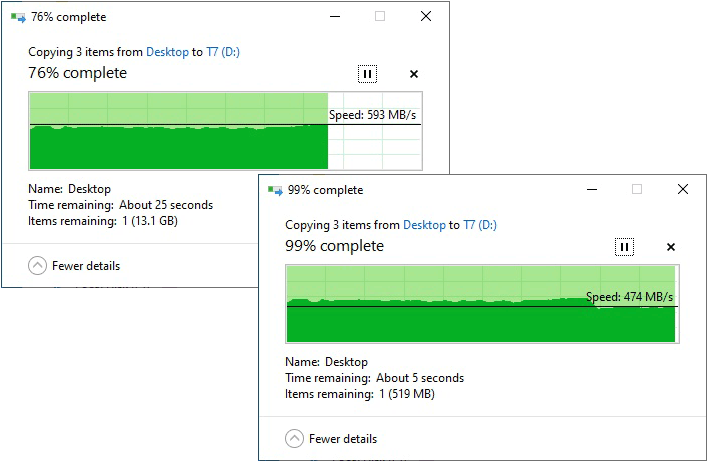 In terms of real-world file copies, we saw transfer speeds typically hover in the 600MB/s range when moving large, compressed files around. We should note, however, that like many of today's solid state drives, the Samsung T7 Touch leverages a portion of its NAND as a write cache, and if that cache is exhausted, performance will taper off. What you see above is roughly 60GB of data being written to the drive. For the vast majority of the transfer, the drive maintained a smooth 590MB/s-ish transfer rate. But around the 78% mark (or about 40GB), performance drops-off and settles in the 475MB/s range. Note that the size of the cache will be smaller on the 500GB drive and larger on the 2TB drive. Either way though, we doubt most users will be consistently transferring 20 - 40GB of data, though it's still something to be aware of. 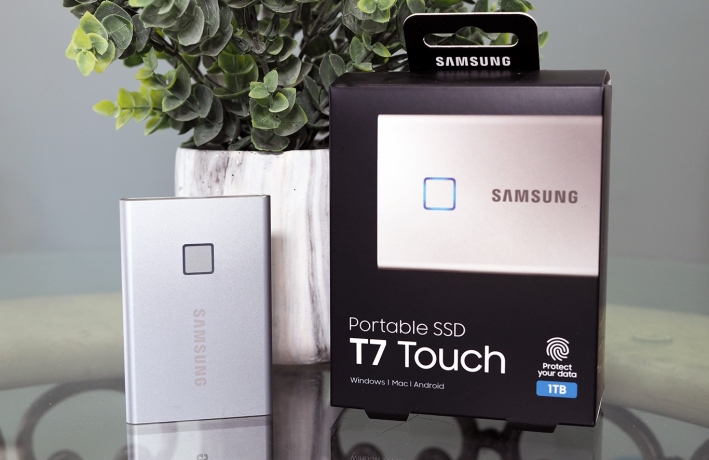 
The Samsung T7 Touch Portable SSD is currently available for prices ranging from $129 (500GB) to $399 (2TB), depending on the capacity. The 1TB we featured here is available for $229. At those prices, the Samsung T7 Touch clearly commands a bit of premium; the T5, for example, is available for about $155 in the same capacity, and some other brands are available for even less. The Samsung T7 Touch, however, offers relatively strong performance for a USB-based external drive and its integrated fingerprint sensor adds a level of security and convenience that’s currently uncommon in the market. The T7 Touch’s small form factor and excellent build-quality also add a little something extra, so it’s easy to see why Samsung commands a premium for the drive.

All told though, we really like the Samsung T7 Touch. If you’re shopping for a fast, durable, and attractive external storage solution with the security-related features offered by the drive, the Samsung T7 Touch Portable SSD would be a great choice.