Shoving modern hardware into an old chassis was not enough for me and I had to take it even further with retro-inspired logos and stickers to match the build. I always wanted an AMD K6-III processor back in the day, so I used that logo as my inspiration for a retro Ryzen sticker. High-quality vector logos of the K6-III were available, so it was not hard to put together.

Finding high-quality versions of the ATI Rage II/Pro/128 logo was not as easy, however. Fortunately, I was able to get in touch with Eric Pohner, a former AMD Creative Director from that era (thanks Godfrey!). Pohner informed me the font that was chosen was Matrix II ExtraBold that was tweaked to be italic. Armed with that knowledge, I recreated the logo in the same retro style.

But I did not stop there. The original eMachines system spec sticker was still on the case when I bought it, but the glue barely held the sticker in place anymore, so I scanned it and recreated the exact style and font, but with updated and upgraded specs. It is also not an eMachines without a Never Obsolete sticker somewhere, so I made one up and stuck it on the Blu-ray drive, too. 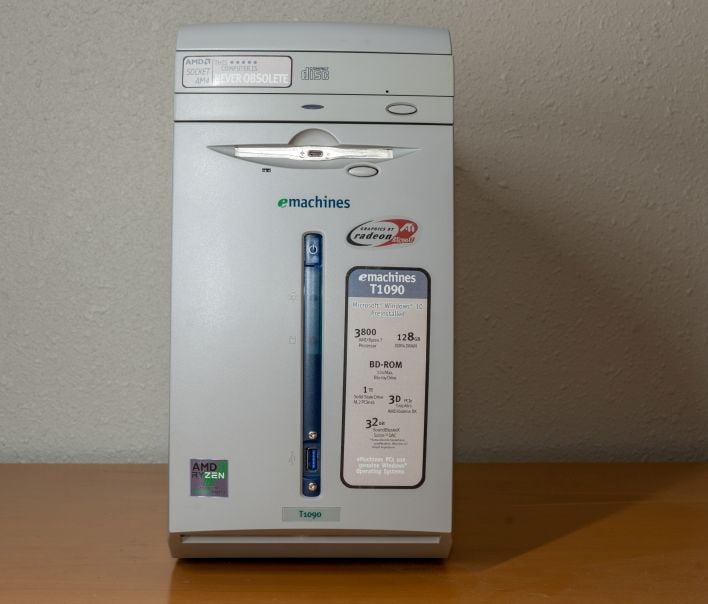 Printing the stickers was a bigger chore than designing them, actually. I ordered white and clear sticker paper sheets to print on an old Oki color laser printer that is not exactly calibrated for accurate color. After a dozen revisions attempting to get the color as true to the original as possible, I gave up and settled on good enough. Initially, I planned on printing the stickers and cutting them out the old fashion way with scissors. Luckily for me, my amazing, artistic wife indulges my crazy ideas and employed her Silhouette Cameo to cut the stickers precisely, round edges and all.

The system wouldn’t be complete without an accompanying System Control Panel, too.

As much as I wanted to track down an old eMachines LCD display to install a modern monitor into, that was above my skill level. I settled on a budget 27-inch LG 27MN60T monitor available at Amazon for its silver stand that matches the eMachines grey a lot better than a black or white monitor would. The monitor is a basic 1080p, 75 Hz, IPS panel that supports AMD FreeSync – nothing too fancy, but it does the job while looking good. 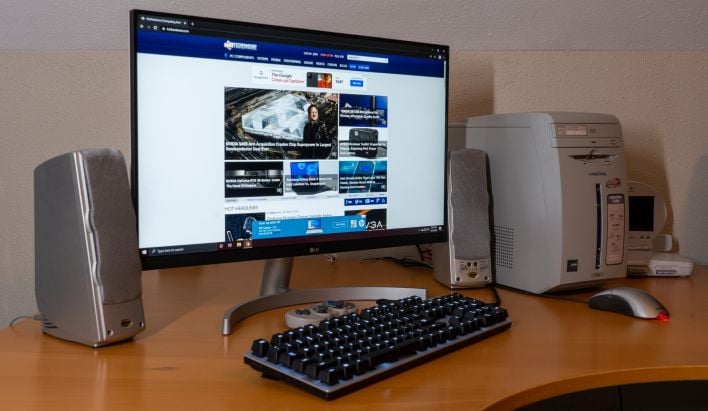 Speaker choices that aesthetically matched, on the other hand, were quite limited. I considered picking up a new set of Klipsch ProMedia 2.1’s, because they were some of the best PC speakers available when this eMachines was new. However, I wanted to stick to a grey/silver theme and didn’t want to deal with the extra space a subwoofer takes up. Lucky for me a pair of lightly used Klipsch ProMedia 2.0 Ultra’s came up for sale on Facebook marketplace for $20, which were perfect. The ProMedia 2.0 Ultras were released in 2004, but they were close enough to the era for me.

The keyboard and mouse were the final missing pieces. I tend to stick with Logitech peripherals and went with a G413 Silver for color-matching purposes. My mouse choice was old school because I had a spare Microsoft IntelliMouse Explorer 3.0 that fit in perfectly, initially. Microsoft released an updated Pro Intellimouse last year that stays faithful to the old Explorer design but modernized with a newer PixArt tracking sensor that’s higher DPI. I ordered one but it didn’t arrive in time for the photos. An 8BitDo SN30 Pro controller completes the experience, because you can’t play Fall Guys with a keyboard and mouse.
PREV PAGE NEXT PAGE