How We Configured Our Test Systems: We tested the graphics cards represented in this article on a MSI X570 Godlike motherboard, equipped with a Ryzen 9 5950X and 16GB of G.SKILL DDR4 RAM clocked at 3,200MHz. The first thing we did when configuring the test system was enter the UEFI and set all values to their "high performance" defaults, then we disabled any integrated peripherals that wouldn't be put to use. The memory's clock was dialed in to its optimal performance settings using its XMP profile and the solid state drive was then formatted and Windows 10 Professional x64 was installed and fully updated. When the Windows installation was complete, we installed all of the drivers, games, applications and benchmark tools necessary to complete our tests.

For all of the standard tests, the Radeon RX 6000 series cards were tested using their "Balanced" performance profile enabled in the driver, but the PowerColor card was tested in its default OC mode (versus the optional Silent mode). "Rage" mode was enabled on the PowerColor Red Devil Ultimate Radeon RX 6900 XT for a sampling of tests present in the overclocking section of this article, however. The Radeons were also tested with Smart Access Memory enabled throughout. 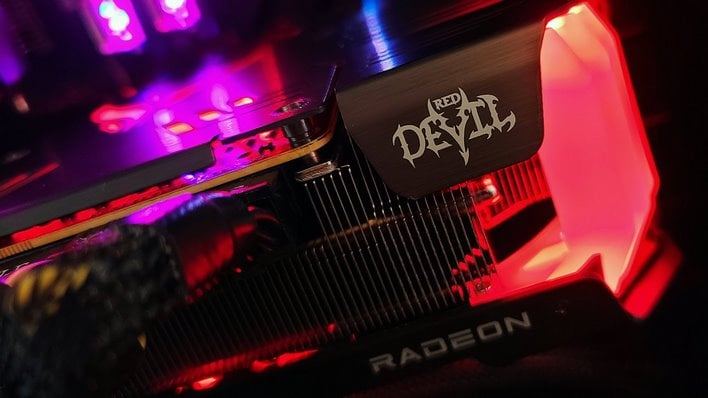 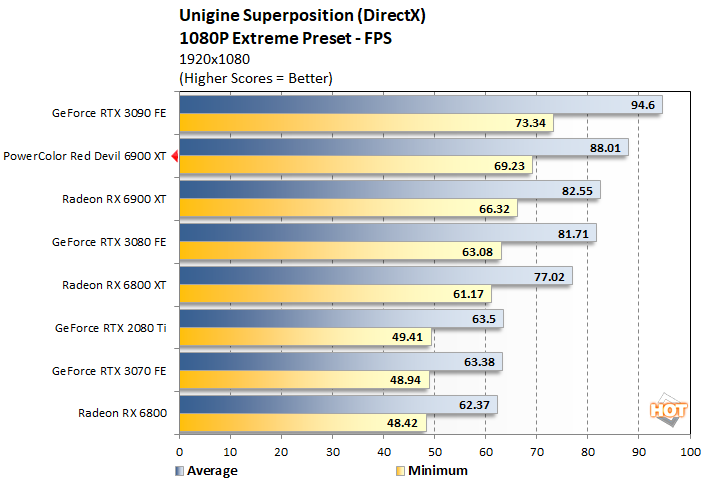 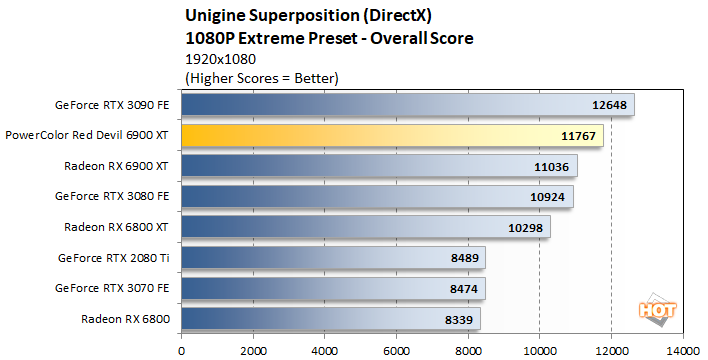 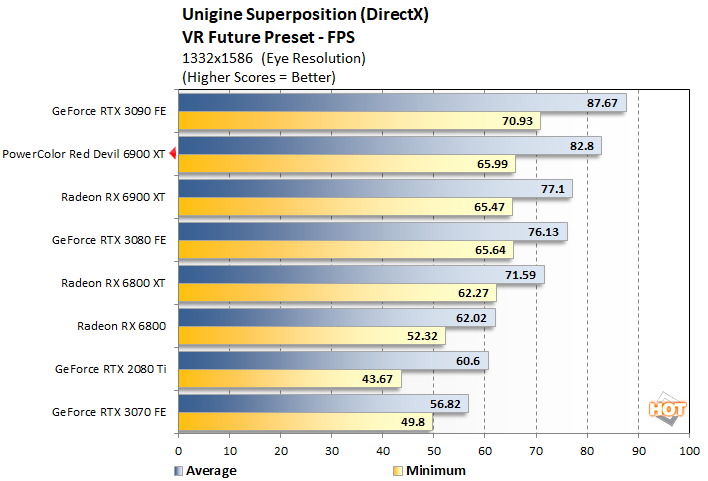 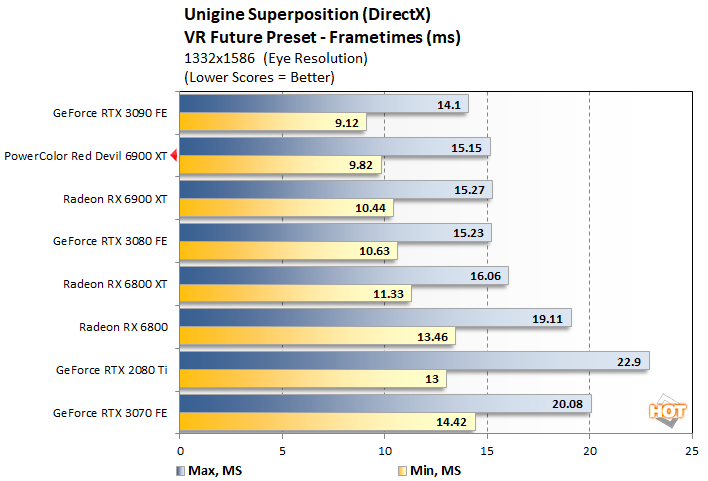 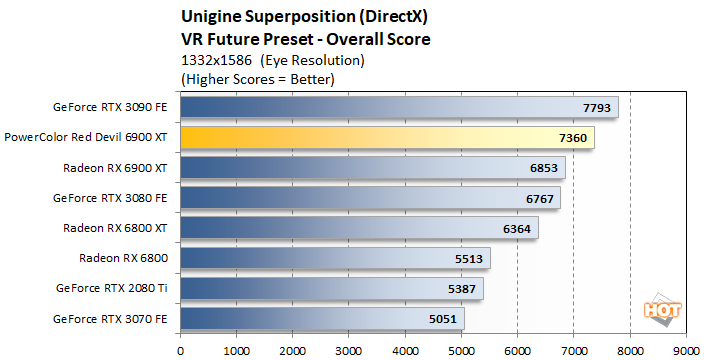 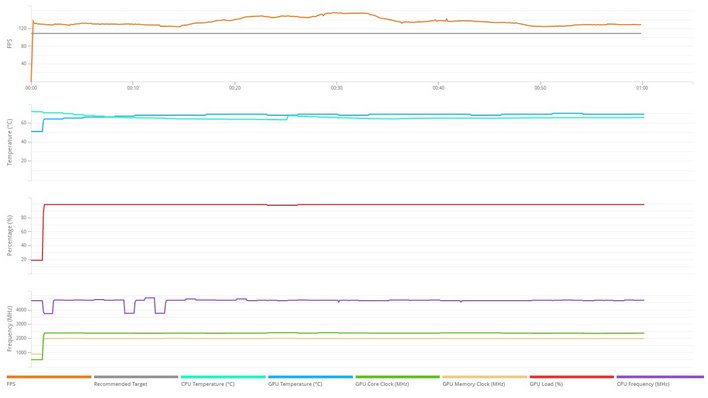 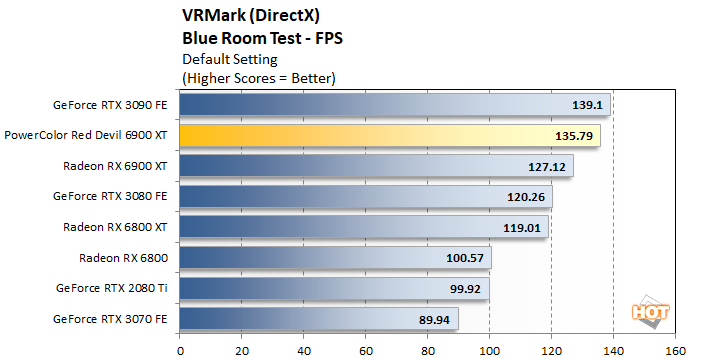 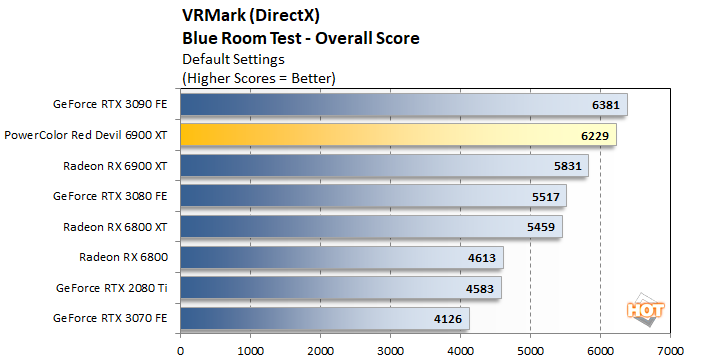 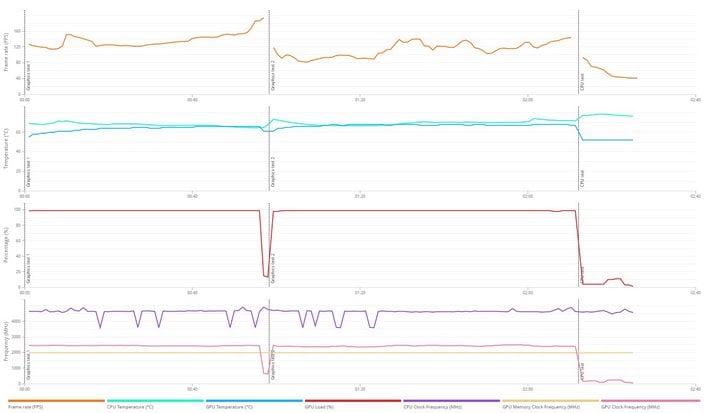 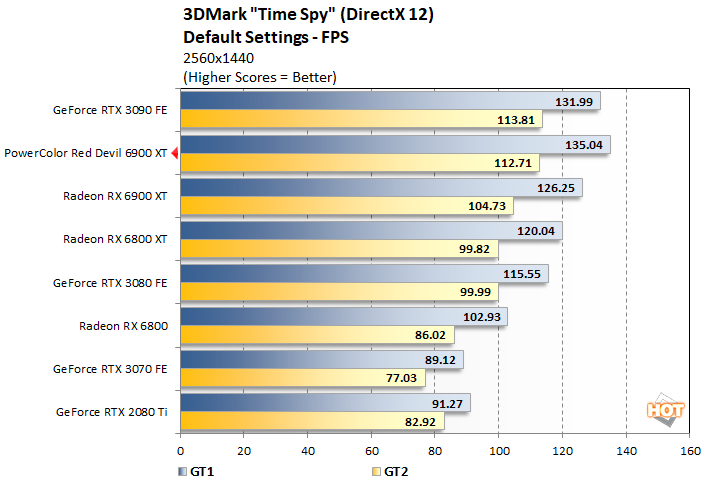 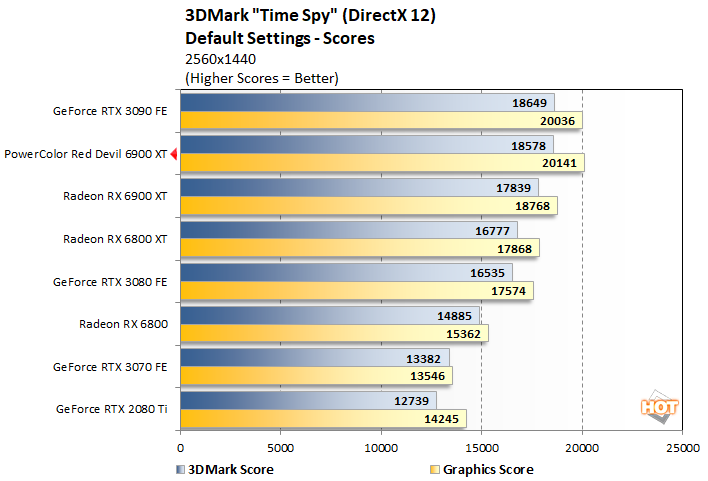 In the DX12-based 3DMark Time Spy benchmark, the PowerColor Red Devil Ultimate Radeon RX 6900 XT and GeForce RTX 3090 run neck and neck. Technically the 3090 lands in the top spot, but they actually trade victories in the individual game tests and the PowerColor card ends up with a higher graphics score. 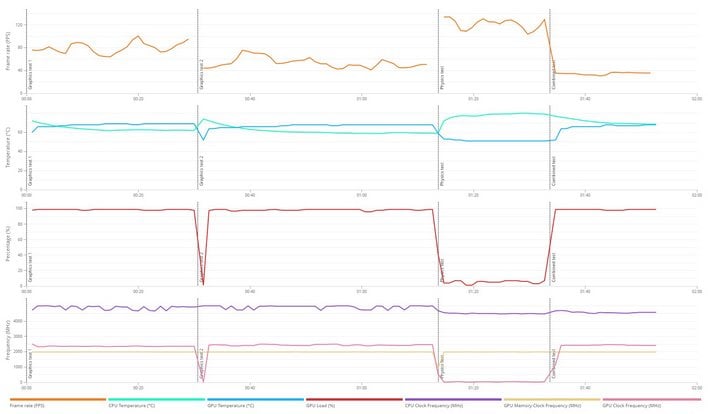 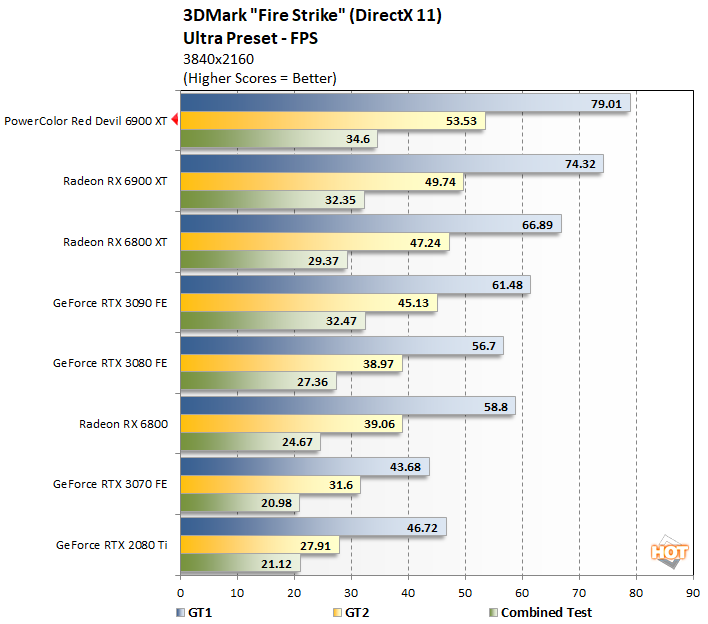 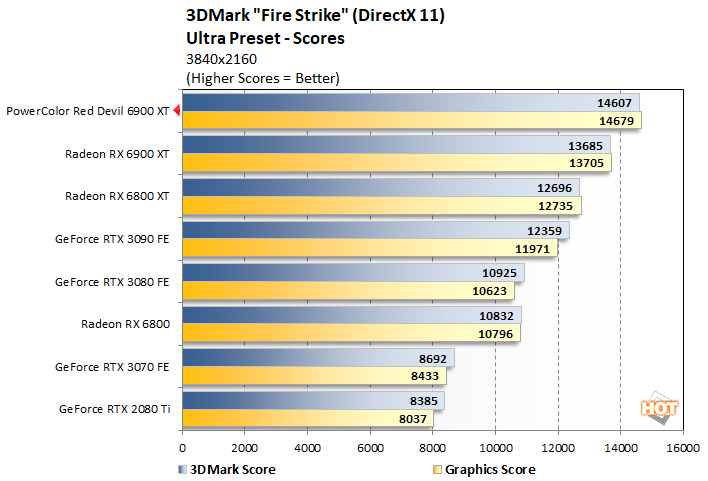 The PowerColor Red Devil Ultimate Radeon RX 6900 XT lands in the pole position in Fire Strike and puts up the best score we have seen from a single GPU in this test to date. 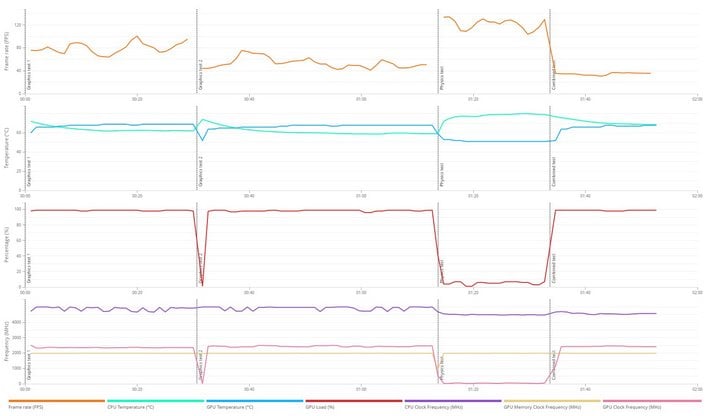 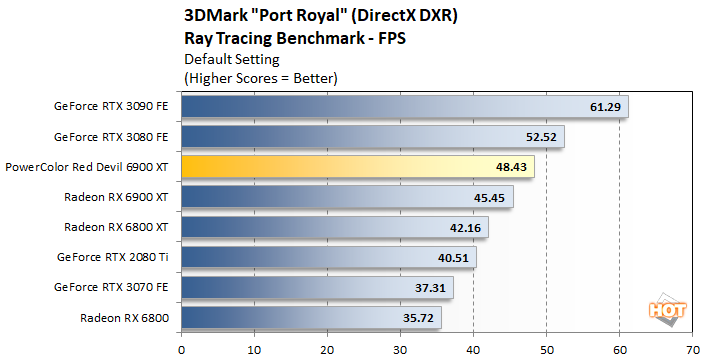 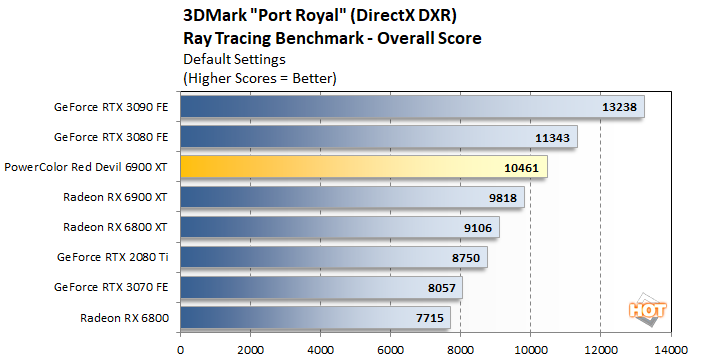 We also experimented with the more focused DirectX Ray Tracing Feature test, which was recently released as an update to 3DMark... 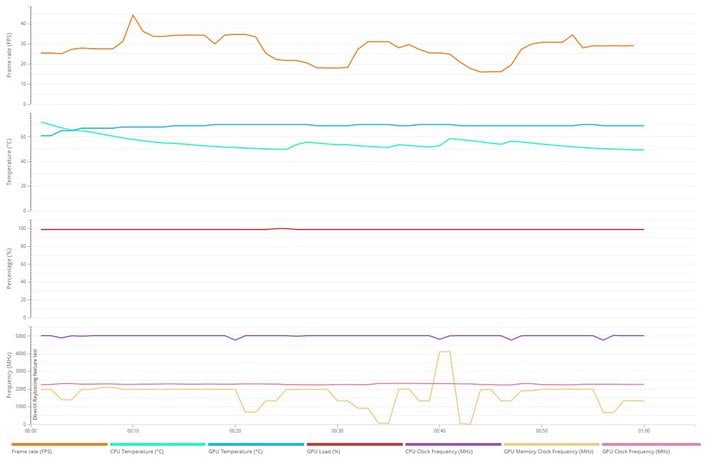 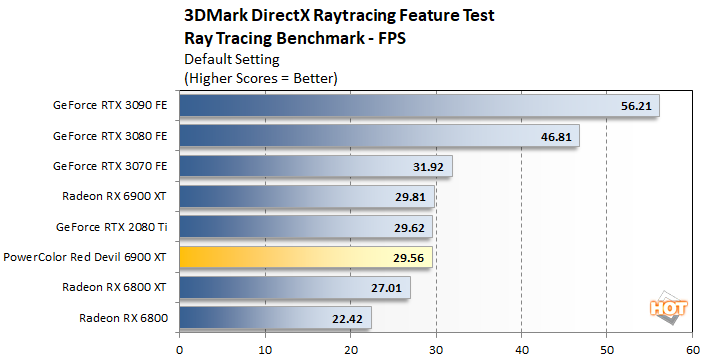 The DXR Feature test highlights Navi 21's Achille's Heal. Even the GeForce RTX 3070 ends up being faster than the PowerColor Red Devil Ultimate Radeon RX 6900 XT here. Quizzically, the PowerColor card also ended up trailing the reference design sever so lightly, though we're talking about a fraction of a frame per second difference.
PREV PAGE NEXT PAGE