We didn’t experience any problems with calls and data speeds using the OnePlus 10 Pro on T-Mobile’s sub-6GHz 5G network in San Francisco. This phone also works fine on Verizon’s sub-6GHz 5G network, but not AT&T’s. And unlike last year’s OnePlus 9 Pro, it lacks mmWave 5G. Obviously, that’s a major drawback considering Apple, Samsung, and Google’s flagships all support 5G on the majority of US carriers.

On the audio front, the OnePlus 10 Pro features an excellent sounding pair of stereo speakers (earpiece plus bottom-firing driver) with Dolby Atmos. There’s no headphone jack, but this handset supports both analog and digital audio devices over USB Type-C, so your wired listening experience is just a dongle away. And if you prefer going wireless, it offers aptX HD and LDAC codecs for high quality audio over Bluetooth.

The OnePlus 10 Pro packs Qualcomm’s flagship 4nm Snapdragon 8 Gen 1 SoC, and delivers blazing performance to match. As you’d expect, it juggled our usual collection of productivity, social media, entertainment, and gaming apps without breaking a sweat. Here in the US, we only get one configuration, with 8GB of LPDDR5 RAM and 128GB UFS 3.1 storage. Either way, there’s no microSD support.

While the OnePlus 10 Pro feels incredibly smooth and responsive, our benchmarks tell an interesting story (see below). The results are mixed, with some scores falling into Snapdragon 865 territory, and others being stellar. Like with the Galaxy S22 series, GPU workloads show significant performance gains over last year’s Snapdragon 888, but the OnePlus 10 Pro throttles less than Samsung’s flagships. 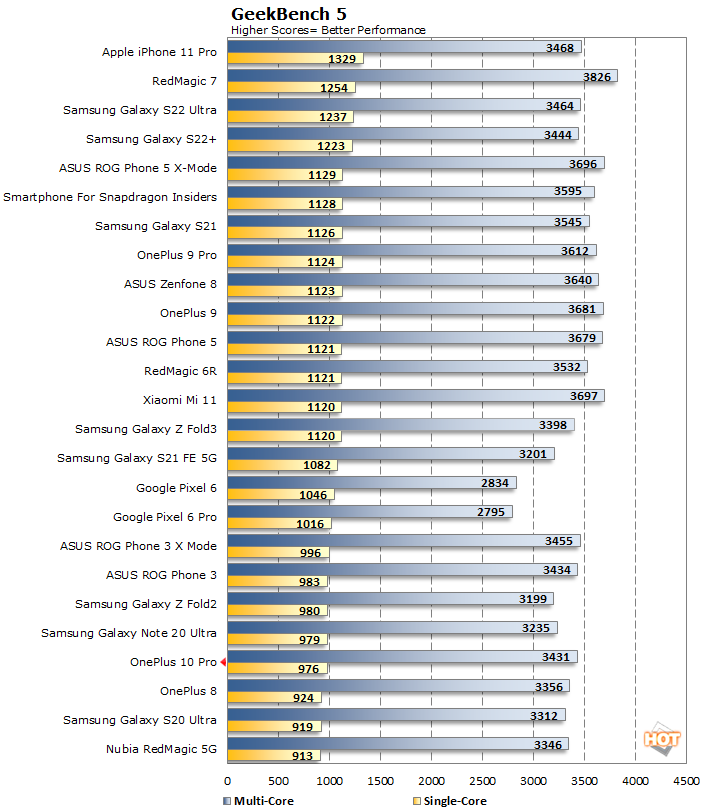 GeekBench isn't our favorite benchmark, as it's purely synthetic and can be heavily targeted for optimization. Regardless, the Snapdragon 8 Gen 1 processor usually delivers a slight improvement in single thread performance but minimal improvement in multi-threaded performance over previous generation Snapdragon 888-equipped Android flagships. But here, the OnePlus 10 Pro strangely lands among Snapdragon 865-equipped handsets for some reason. 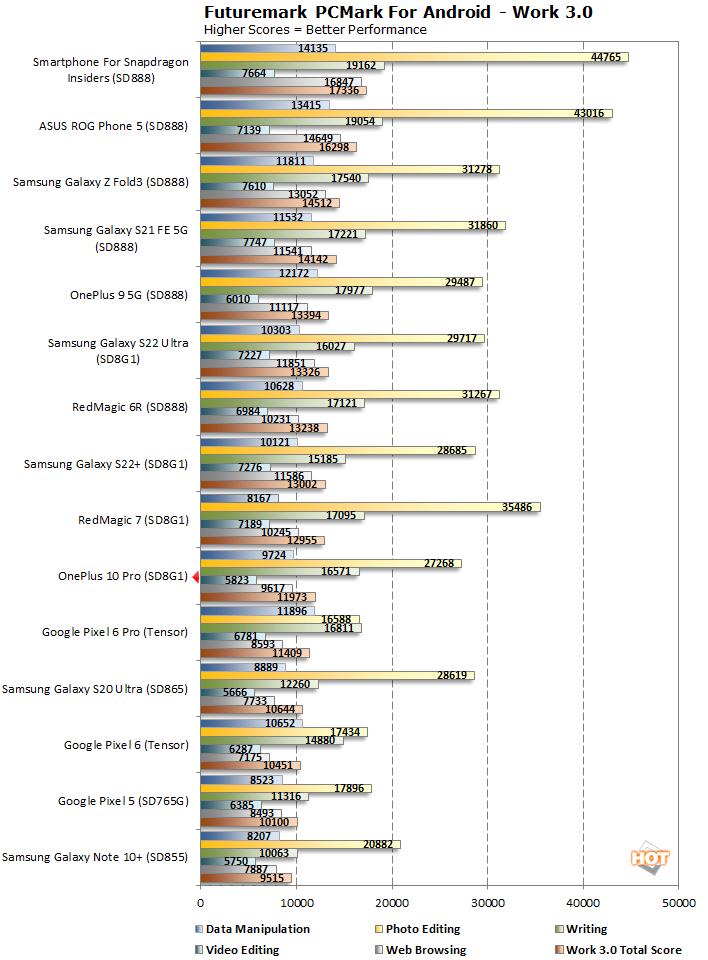 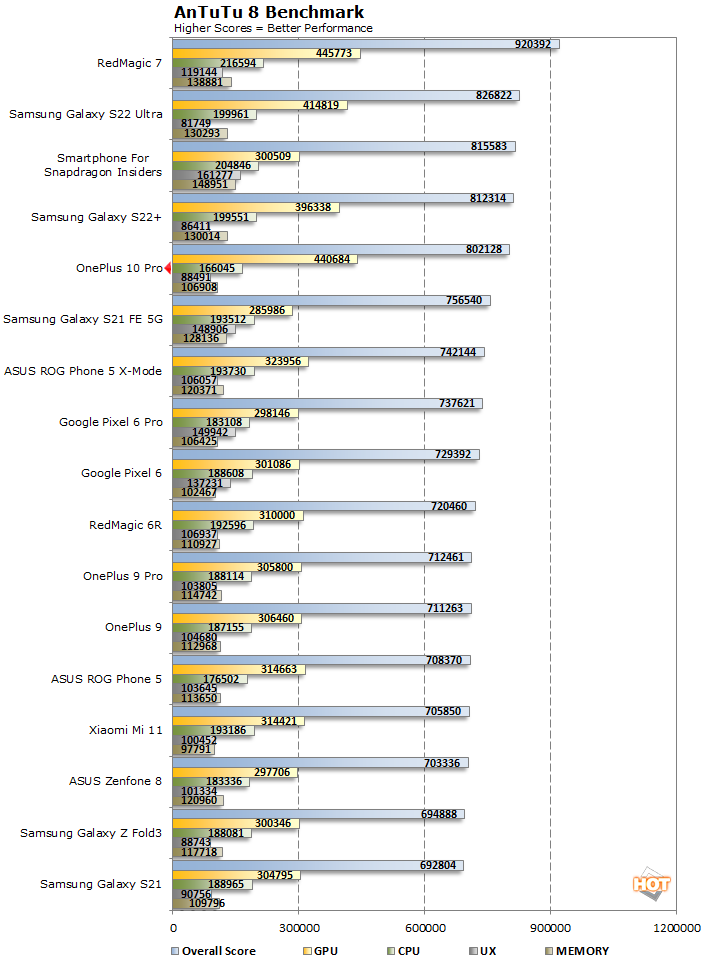 According to AnTuTu, the OnePlus 10 Pro offers a substantial increase in performance vs. previous generation Android handsets, coming in just below Samsung's Galaxy S22+ in overall score. 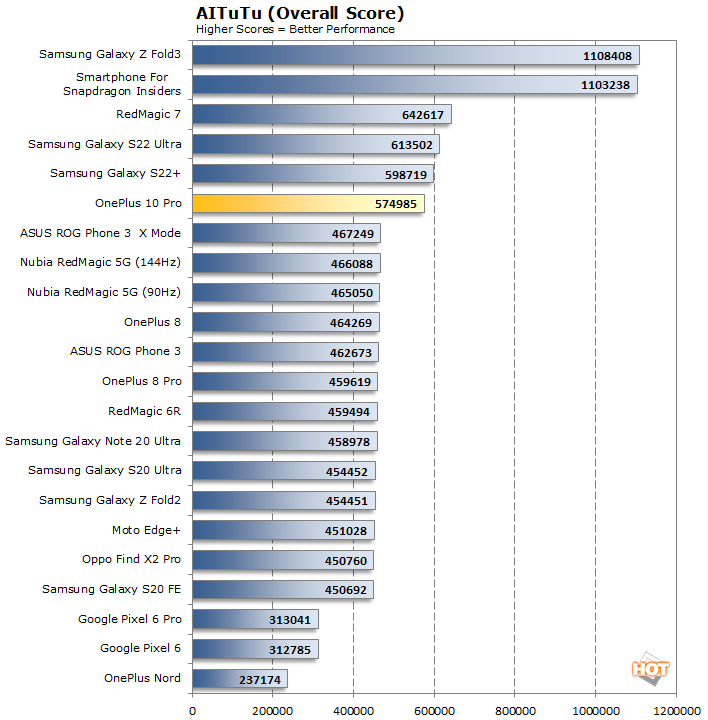 However, in AITuTu, which is specifically an image recognition and classification benchmark for AI and machine learning workloads, we see a different picture. Here there are big gains for the Snapdragon 8 Gen 1 powered OnePlus 10 Pro, but it doesn't catch two scores in our database from Snapdragon 888-powered devices. We've found this to be the case where some phones might not have the latest neural network models installed in the phone's firmware packages, so an update from OnePlus could easily change this picture.

3D Graphics And Gaming Benchmarks With The OnePlus 10 Pro 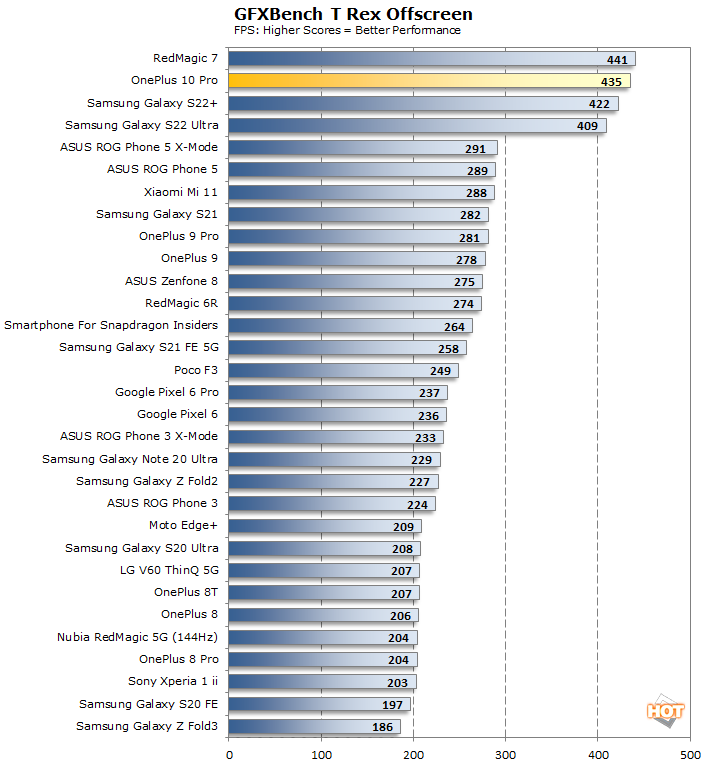 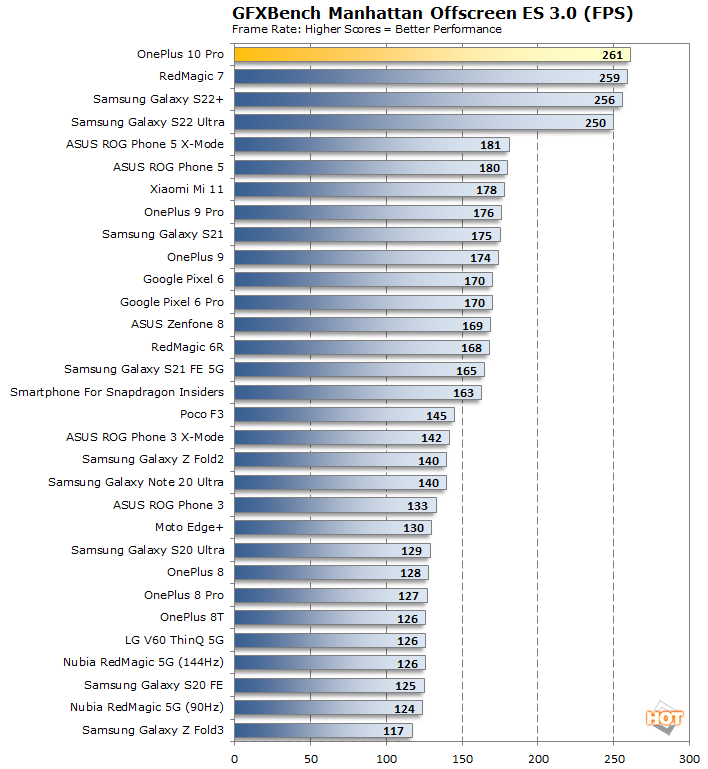 Now we're seeing the kind of performance improvement we expected from the Snapdragon 8 Gen 1-equipped OnePlus 10 Pro. This new phone clearly beat Snapdragon 888-powered devices, and comes out way ahead of ASUS' ROG Phone 5 in X-Mode. It even best Apple's latest iPhone 13 Pro in the more modern Manhattan test, which is a major coup. 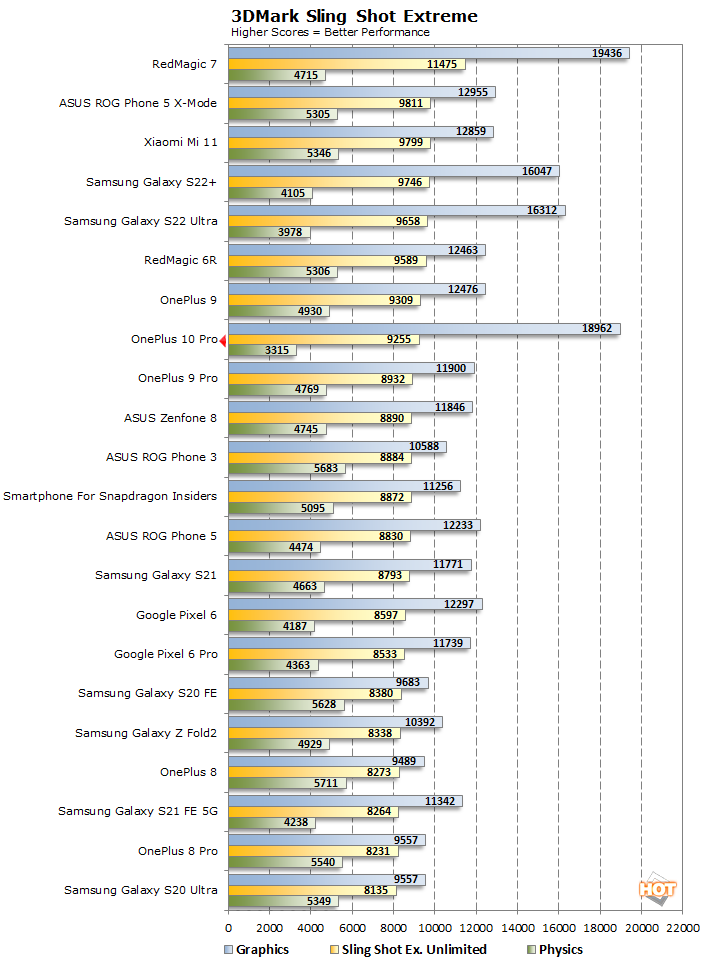 Here we see no significant improvement to the overall score over Snapdragon 888-equipped flagships. Still, the OnePlus 10 Pro performs extremely well in this test, beating every other Android flagship but the RedMagic 7 in the graphics score by a wide margin. 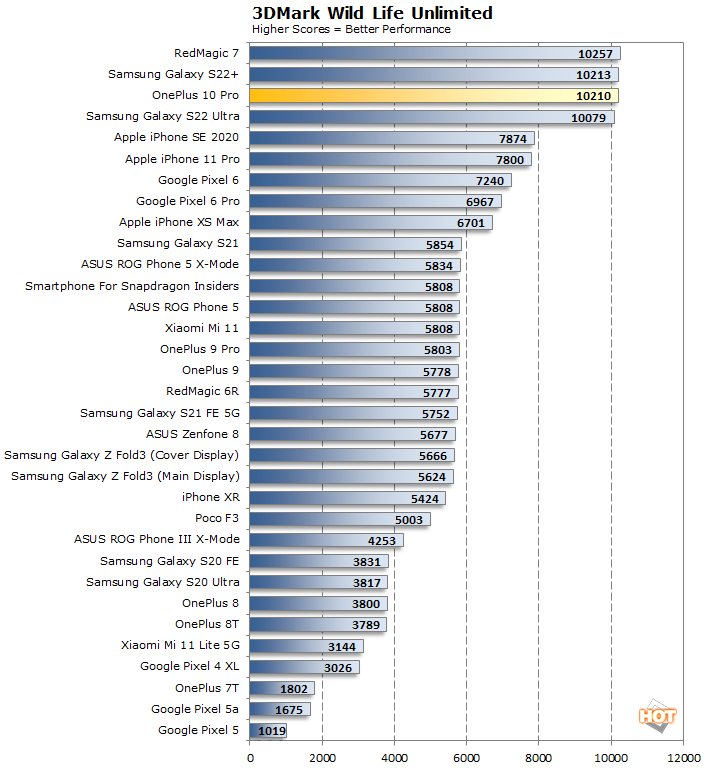 3DMark Wild Life is a significantly more taxing graphics benchmark that employs cutting-edge mobile game engine technologies to deliver impressive visuals -- as you can see in the screen shot above. Here the Snapdragon 8 Gen 1-powered OnePlus 10 Pro delivers a massive improvement in performance versus some of the fastest Snapdragon 888-equipped devices, and even comes within striking distance of the iPhone 13 Pro, which is running on its Metal API in this test.

Unfortunately, the OnePlus 10 Pro does exhibit similar (but lesser) throttling to what we experienced with the Galaxy S22 series, managing a stability score of 63.5% in the Wild Life Stress test. This isn't too surprising, as most Android phones we test -- as well as iPhones -- throttle pretty hard under load. Gaming phones like the ASUS ROG series and a few others are notable exceptions here with respect to throttling, however.

Other specs are pretty standard for a modern flagship. You’ll find sub-6GHz 5G on board, plus CAT 18 LTE, dual-band WiFi 6E (802.11ax), Bluetooth 5.2 (LE), NFC, and dual-band A-GPS/ GLONASS / BeiDou / GALILEO positioning – not to mention the usual collection of sensors. The in-display optical fingerprint sensor is fast and reliable, and so is face unlock. In addition, haptics feel absolutely fantastic. 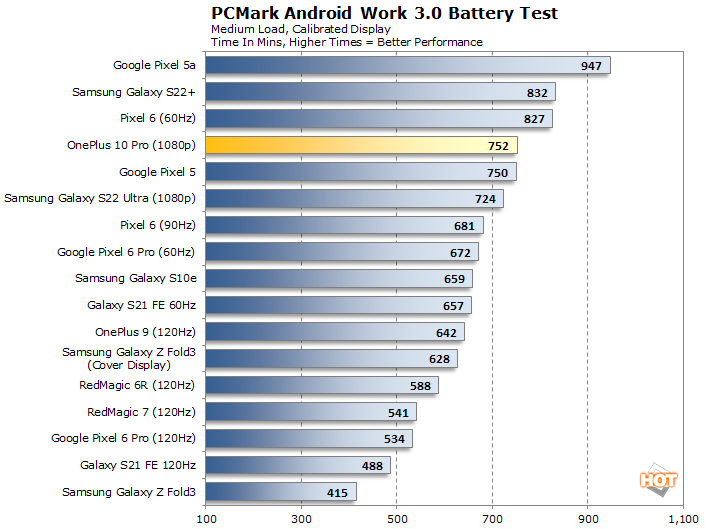 Battery life is pretty solid. The OnePlus 10 Pro packs a 5000mAh battery, which lasted 12 hours and 32 minutes at 120Hz (adaptive, 1080p) in our PCMark battery test. It supports SuperVOOC 65W wired fast charging and AirVOOC 50W Qi-compatible wireless fast charging – plus reverse wireless charging. There’s even a 65W SuperVOOC charger in the box (worth $35), which also doubles as a 45W USB-PD charger.

It’s also worth mentioning that the OnePlus 10 Pro offers 80W wired fast charging in some markets (like China and India). Apparently the 80W version of SuperVOOC isn’t compatible with 110/120V power grids, so we’re not getting it here in North America. The 50W AirVOOC wireless charging stand costs $70, but that doesn’t include a brick.


Next up: the software, pricing, and the review verdict...
PREV PAGE NEXT PAGE