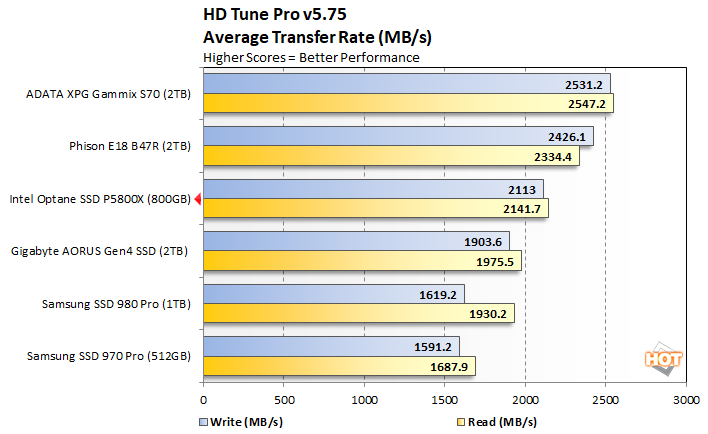 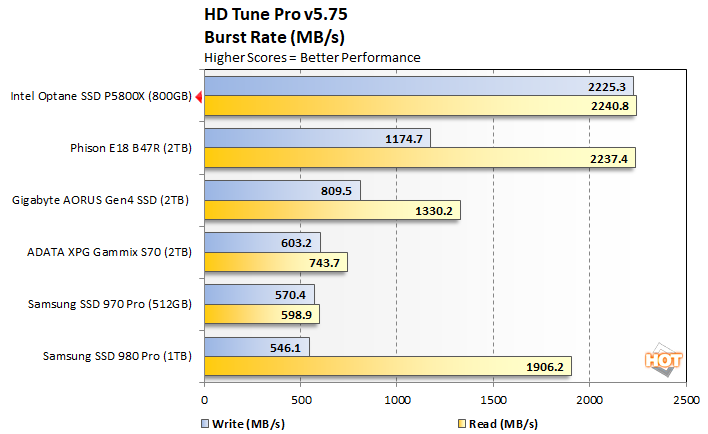 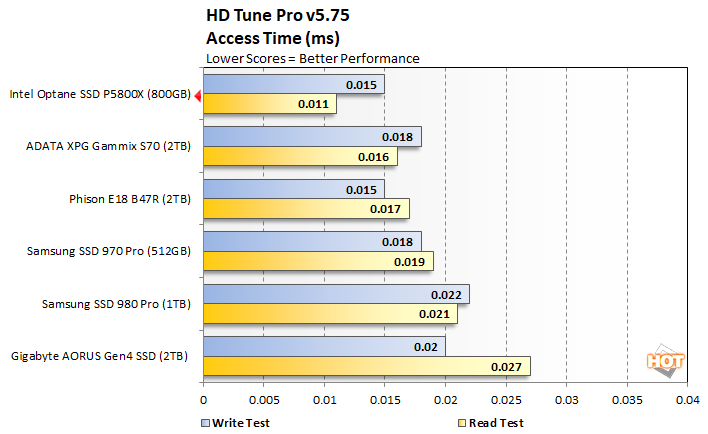 The Optane SSD P5800X offered sequential transfers just a bit behind the Phison-based drives in HDTune, but its burst rates and latency were the best of the bunch. Read latency in particular is exceptionally good here. 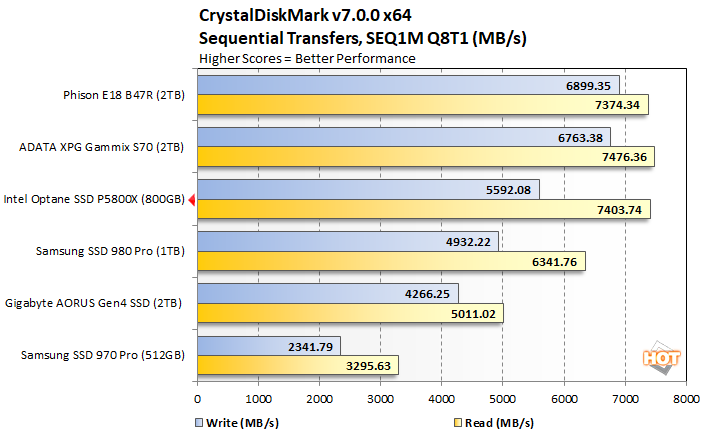 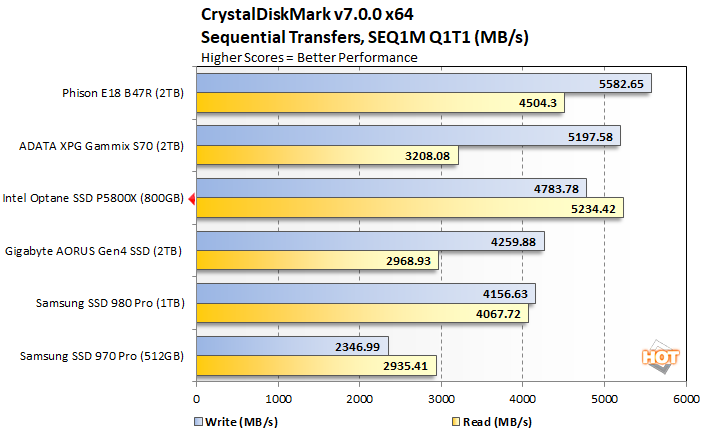 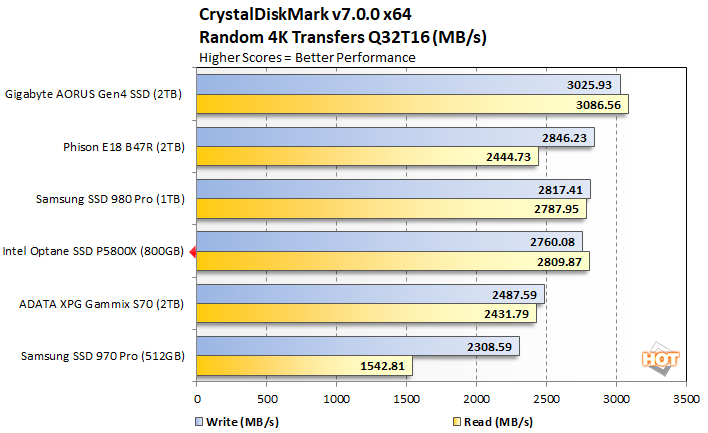 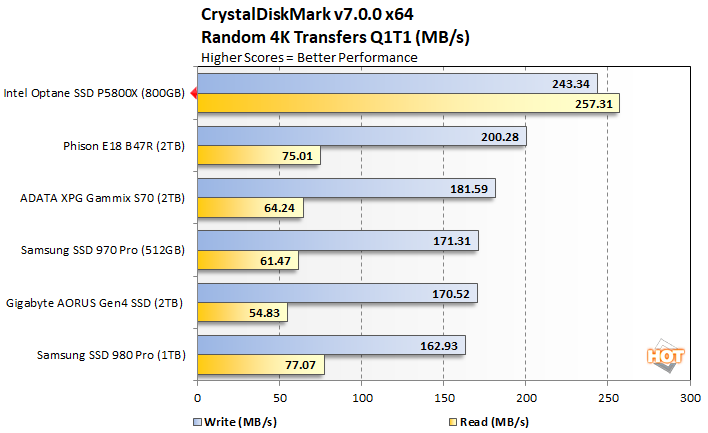 CrystalDiskMark encapsulates the Optane SSD P5800X story very well. As you digest all of the results above, you'll notice sequential transfers that are very good, but not quite on the level of the fastest NAND-based SSDs. However, random transfers, specifically at QD1 are next-level. The Optane SSD P5800X's 4K Q1T1 read performance is over 3.3x better than the fastest NAND-based drives out there and random writes lead the pack by a wide margin as well. 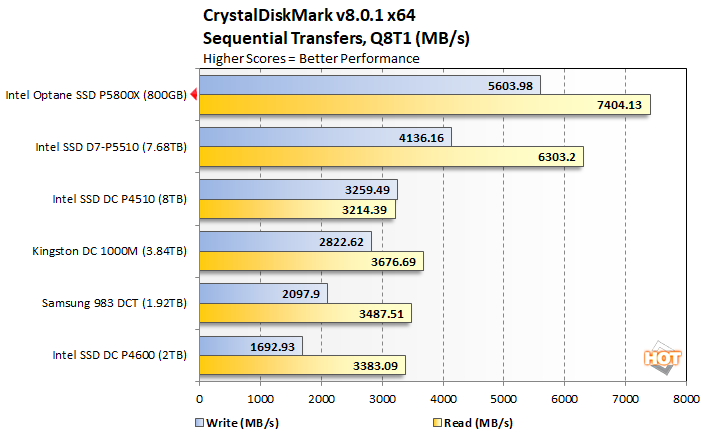 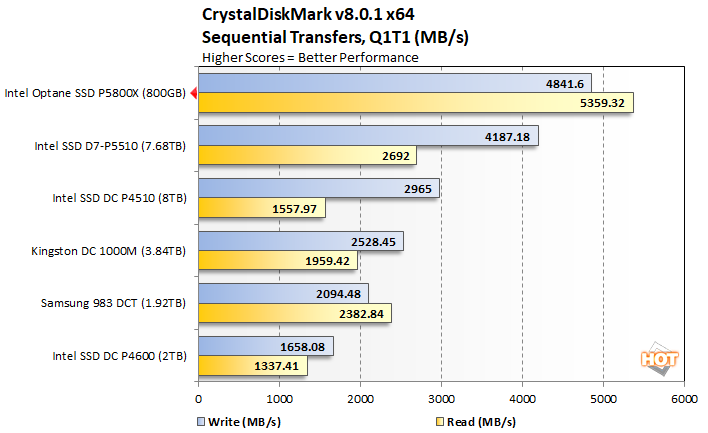 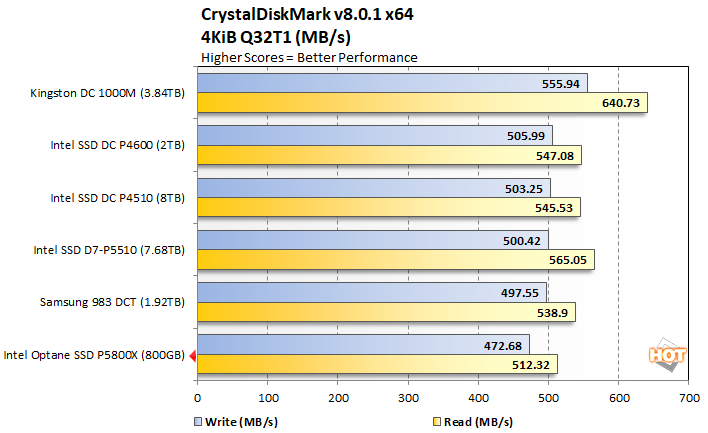 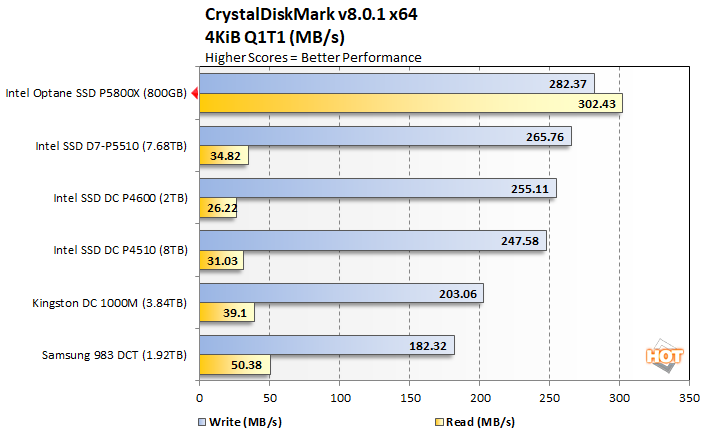 We also had some fresh CrystalDiskMark 8 data avaialble from an upcoming enterprise SSD review, so we figured we'd toss these into the mix as well, to illustrate what the Optane SSD P5800X can do with the latest version of this benchmark. As you can see, performance is strong across the board and the Optane SSD P5800X's low queue depth 4K transfers lead the pack -- especially with reads.

Yes, the graphs above are correct. PCMark 10 is perhaps the most telling benchmark we ran. This benchmark uses trace-based tests of actual consumer applications and workloads. Because the overwhelming majority of consumer workloads reside at QD1 and consist mostly of a mix of random reads, the Optane SSD P5800X really shines. It completely obliterates the fastest NAND-based PCIe Gen 4 SSDs across the board, and offer significantly better average real-world bandwidth and latency.

The Intel Optane SSD P5800X is an absolute beast in the workloads that matter most for the vast majority of workstation users and enthusiasts. Random reads and writes are exceptionally good and access times at low queue depths are excellent – we point these aspect out first, because they are most impactful in terms of perceived responsiveness. The Optane SSD P5800X‘s sequential transfers, while strong, aren’t on the same level as some of today’s fastest NAND-based PCIe 4 solid state drives, but the Optane SSD P5800X is still able to exceed 7GB/s, which is extremely fast. 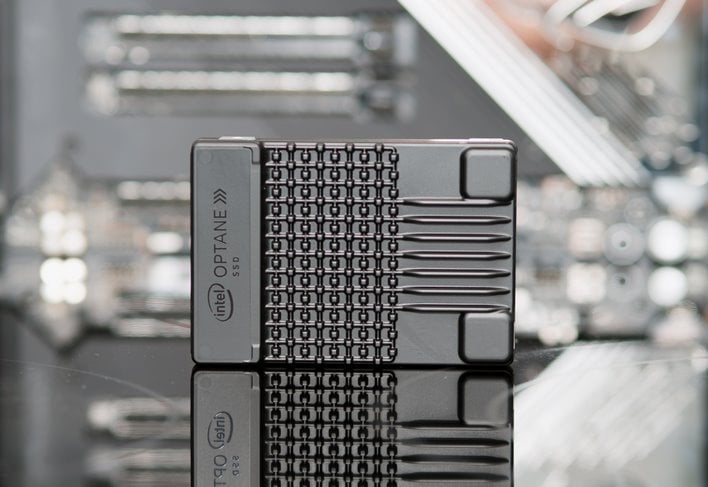 
As well as the Optane SSD P5800X performs, its endurance is also a key differentiator. The Optane SSD P5800X is literally 100X more durable than many NAND-based drives. Of course, as the flagship Optane-branded drive in Intel’s current line-up, the Optane SSD P5800X ain’t cheap. In fact, the lowest price we found on-line for the 800GB model we tested was over $2,000 – or approximately $2.63 per gigabyte. That’s about 8x the price of some of the best 1TB Gen 4 NAND-based SSDs. Do you understand now why we warned you in the intro?

Due to its heft price premium, the Optane SSD P5800X clearly isn’t for everyone, but hardcore enthusiasts or pro workstation users with the budget, will probably be drooling for one of these puppies. The Intel Optane SSD P5800X offers ultra-endurance and killer performance where it matters the most, and as such, we’re giving it an Editor’s Choice award. If money was no object, this is the drive we’d want in a system over all others right now. It's price tag will obviously put it out of reach for most folks, though.