For this next set of tests, we're going to do something a little different. One of the Optane Memory H20 drive's main benefits is its ability to maintain its relatively high performance, while under multiple, simultaneous workloads (within limits, of course).

In this groups of tests, we tracked Windows 10 boot times (using BootRacer) and GIMP load times with a large, 86MB workload file. To add an additional twist to the GIMP load times, however, they were tracked on their own and again with a simultaneous file-copy (of an 18GB video file) taking place in the background. That may seem like a strange workload, but if you've ever had multiple torrents coming down at high speed, or had a particularly fast download from Steam writing to a drive while you're trying to do something else, it can dramatically affect the performance of some SSDs. This test simulates that scenario.

Also note, that these results are the average of three runs recorded after a reboot and letting the test system reach an idle state, and after five previous test runs to ensure the Optane Memory had detected the workload and cached any necessary data.

Before you take a look at these boot times and think they are very slot, note that this is the time it took the test system to power-on, boot Windows 10, display the desktop, and finish loading any background apps and processes -- Windows 10 load times to when the desktop is presented is just a few seconds, like other modern notebooks.

Unlike the previous-gen H10, which showed huge speed up in boot times, the H20 showed only a slight speed boost. Optimizations to Windows, in addition to the more capable NAND SSD seem to have negated some of the benefits we saw on the previous-gen drive here. 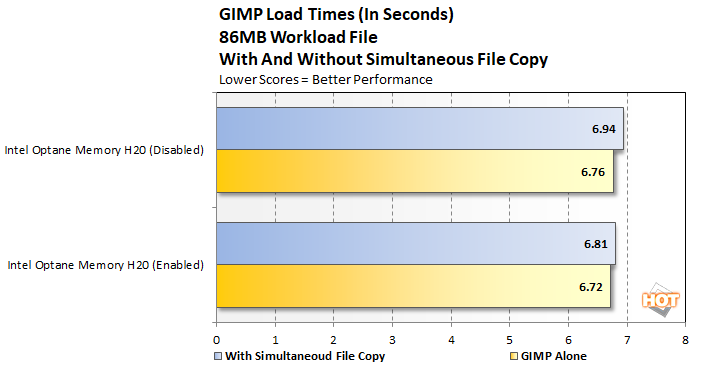 Loading a large file with GIMP also showed only a slight improvement with the Optane Memory H20, with or without the simultaneous file copy.

Although it didn't show all of the same types of improvements that we saw with the previous-gen H10, the new Intel Optane Memory H20 ultimately performed well and excels exactly where it should. There are often trade-offs to make with hybrid storage caching solutions such as this, but Intel has produced a well-balanced product in the Optane Memory H20 in our opinion. Even under worst-case conditions, the Optane Memory H20 is a responsive, well-performing drive. And for the vast majority of consumer workloads, it only gets better when its Optane Memory cache is enabled.

Intel Optane Memory And SSDs - Find Them At Amazon

Synthetic benchmarks don’t always show the benefits of Intel's Optane Memory H20, but you get a glimpse of the goodness when looking at 4K reads at low queue depths or in trace-based benchmarks. Intel's Optane SSDs are well known for their impressive 4K transfers at low queue depths, and the Optane Memory cache on the H20 result in similar benefits. Although its specifications may not stand-out in light of some higher-end SSDs, the performance characteristics of Optane Memory and the simplified configuration of the H20 make it a good solution for many users who crave a snappy responsive system that don't want to manage multiple storage volumes, or in systems where having multiple storage solutions simply isn't an option.

As mentioned, the Intel Optane Memory H20 isn’t destined for retail shelves; it is an OEM solution that will be sold in system built by Intel’s partners. As such, Intel hasn’t disclosed direct pricing for the drives. We do know that the previous-gen H10 is an affordable option, however, that often didn't bump up pricing much at all (it was often a "free" upgrade offered by some OEMs). Should the H20 be priced affordably as well, it is in excellent option for a mainstream notebook, small form factor system or all-in-one. As the PCMark 10 trace-based benchmarks showed, with real-world consumer workloads, the Intel Optane Memory H20 really shines.