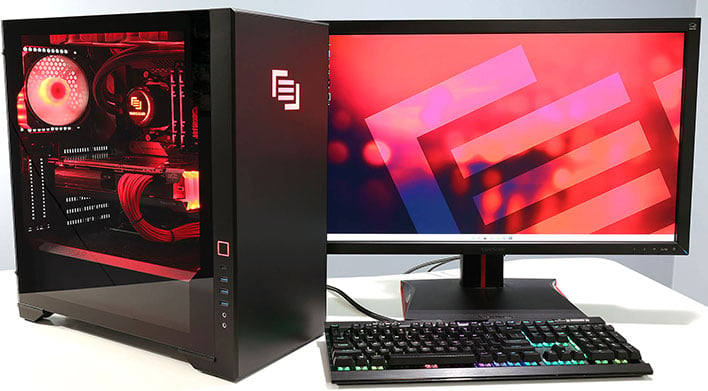 Pre-built gaming PCs have gained in popularity dramatically, as crypto demand and chip shortages drove graphics cards and other component prices through the roof. That said, regardless of current PC components price points (which are now drifting back to MSRP thank goodness), we've always seen the value in a quality pre-built for a myriad of reasons, especially when it comes to some of the best names in the business, like Falcon Northwest, Origin-Corsair and the Northeast local crew at Maingear Computers.

You'll know Maingear, even if you read our pages here only occasionally. The company is a widely-known and respected OG boutique PC builder based in New Jersey. Over the years, Maingear has assembled eye-catching, cutting-edge gaming PCs that typically sport impeccable build quality with immaculate cable management, fit and finish. A few years back we took a look at the Vybe, Maingear's more affordable mid-tower platform, in both an all-AMD Ryzen and Radeon configuration, as well as an Intel 11th Gen config with a GeForce GPU. However, Maingear has been revamping and refining the Vybe since our 2019 evaluations, and now we have significantly more powerful silicon engines on board to process gaming workloads and push the pixels.

Here's the new for 2022 Maingear Vybe, and it's juiced with the current fastest gaming CPU on the planet, AMD's Ryzen 7 5800X3D, and one of the fastest graphics cards in the beefy and powerful Radeon RX 6950 XT. Yes, Ladies and Gents, this is one killer gaming rig ready for action.

Let's break down the rest of the specs, build design and other pertinent details, then we'll just push play and see how she runs... 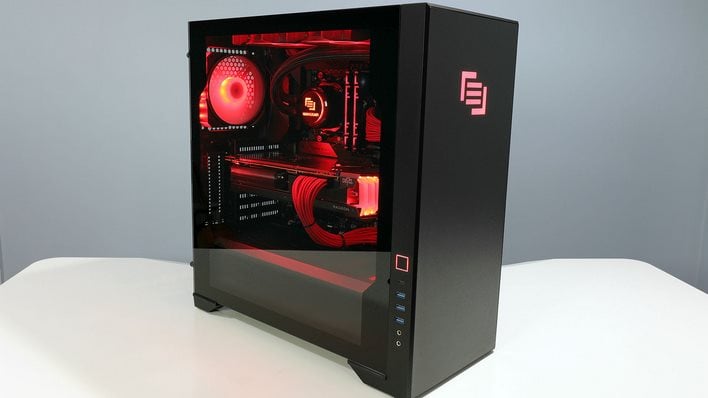 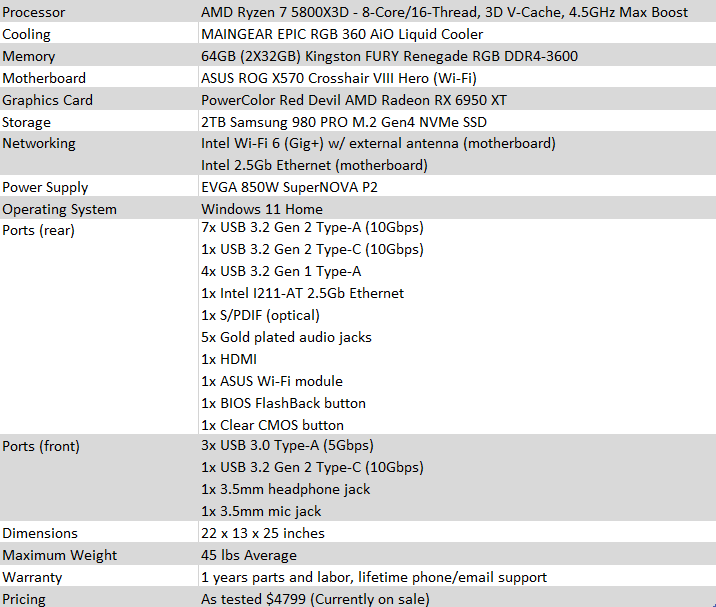 What can we say, that hasn't already been said about a system like this? This is AMD's mature X570 platform at its best, with a multi-gigabit Ethernet port and a fast and fat 2 terabyte PCIe 4 SSD from Samsung. However, what is missing here perhaps are some of the more recent creature comforts from Intel's latest platforms like Thunderbolt 4 connectivity and Wi-Fi 6E. Neither of these features are likely showstoppers for most gamers, but it does speak to how the market is getting ready for AMD's upcoming Zen 4 platform and all the next-gen IO goodness it brings.

That said, again, if we're looking for the fastest gaming CPU that AMD has to offer right now, and the fastest on the market currently, this machine's Ryzen 7 5800X3D processor is it. Toss in a Radeon RX 6950 XT, which is also the fastest graphics card AMD has to offer currently, that trades blows with a GeForce RTX 3090, along with 64GB of DDR4-3600 memory, and you're looking at a monster config that's bound to put up some great gaming performance. But let's look at the rest of this Vybe's design and flow -- or layout, cooling and airflow, more specifically.

Maingear's Vybe chassis is a fairly understated, almost utilitarian design but with some key features that do service both function and form. For starters, the chassis is made of heavy gauge rolled aluminum with a plastic front face plate and bottom feet that lift it off the surface the machine is on by an inch or so. You also get three USB-A ports and a single USB-C port on the front left edge, under the power button, along with discrete headphone and microphone 3.5mm jacks. Placement is excellent here on this side where the glass side panel resides, as you'll want all those pretty, powerful PC components and that immaculate build up on top of your desk for everyone's viewing pleasure.

One might argue that all those ports and the power button should be up top, but that would add to longer wire runs for virtually all motherboard designs, for the front panel button, lighting and IO leads. Side note, you can also hook that RGB illuminated button up to a storage activity lead, which wasn't setup that way for our build, though we've built our own Vybe previously with Maingear's DIY kit and like that little feature very much. There's something satisfying about knowing when your data is being accessed and it's obviously a good diagnostic tool.

Though our previous custom Vybe build was strapped with Maingear's excellent Apex Liquid Cooling distribution block and hard-line liquid cooling system, this 2022 Maingear Vybe is build with a more traditional AiO Cooler that seems to be a semi-custom version of the Cooler Master MasterLiquid ML360 ARGB, with its 360mm radiators, RGB lighting and dual chamber pump. 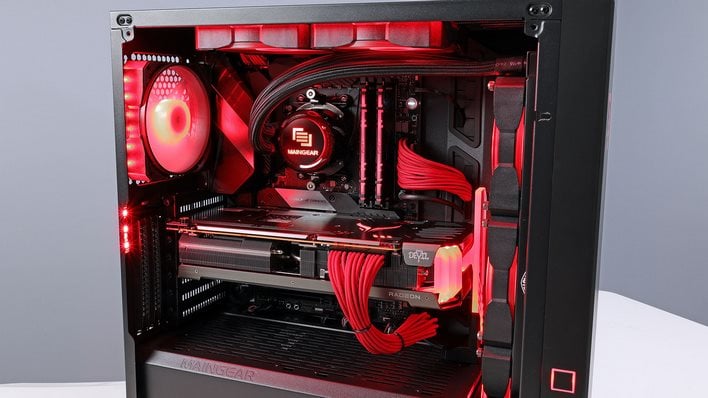 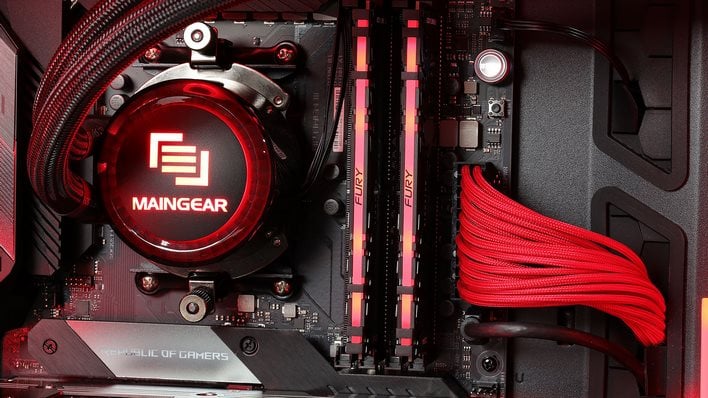 That 360mm radiator and low profile dual chamber pump drives a ton of heat dissipation for an AiO cooler, and its rad is mounted on the front of the case pulling cool air in through the front of the chassis. At first glance, you might think that's not enough air flow (as one major publication we saw did) with the front of the chassis closed off, but that would be an incorrect assumption. If you scroll down the page here, you'll see the back side of the case's front face plate and it's nicely perforated with a grill and vent on the right side. 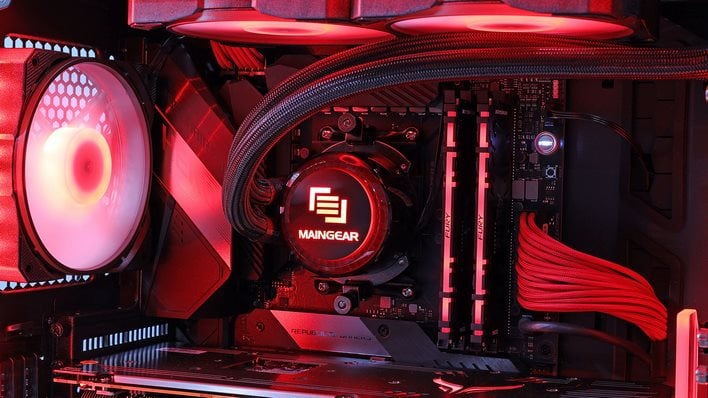 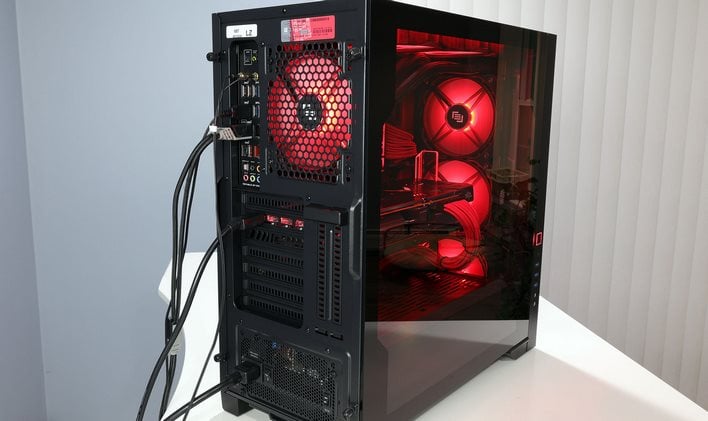 The software side of Maingear's Vybe is a simple, clean affair with just Windows 11 Home in our case, and utilities from the major component manufacturers that you'll want for dialing things in to your liking. That's it - zero bloat, as we've come to expect from Maingear. 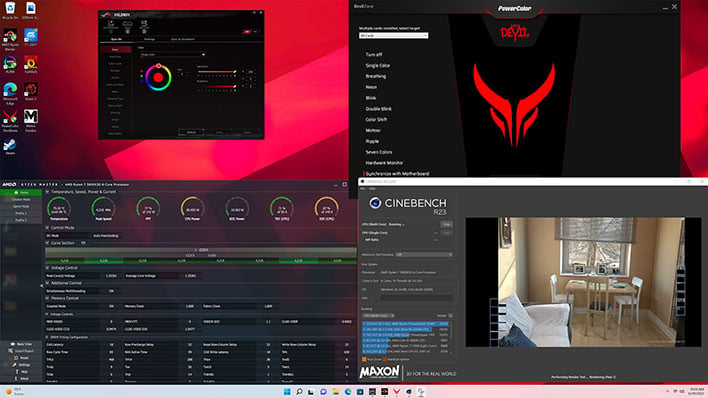 Here we've got ASUS's Aura app for dialing in motherboard lighting, PowerColor's DevilZone and AMD's Ryzen Master utility, which is really all you need to get the job done for lighting and system optimization. Incidentally, since AMD's Ryzen 7 5800X3D generally doesn't support overclocking, we didn't mess with things much. You might get a few more MHz out of that RedDevil Radeon RX 6950 XT, however, if you're feeling the need for more speed.

Speaking of which, we see you peeping at that Cinebench run, so let's get to the benchmarks...
NEXT PAGE