In short, the Stadia experience can be difficult to pin down. Our impressions of it changed depending on how we were using it. That is, in large part, the beauty of it. We can be gaming at our desk, then decide to take a break and resume our session on the television. While this has been possible with technologies like Steam Link and NVIDIA’s GameStream on a local area network, it has never felt as fluid as what Stadia offers. However, we still encountered our share of issues.

The biggest obstacle we encountered was our Wi-Fi connection. We tested Stadia using a Netgear Nighthawk X4S Wireless-AC 3200 router. Our ISP is Spectrum with a healthy 400 Mbps download and 20 Mbps upload connection. We found the quality to be insufferable whenever we tried to use Stadia over Wi-Fi - desktop, Chromecast Ultra, or smartphone. The resolution appeared to be 720p at best with significant compression artifacts and game-ruining skips and stutters. Meanwhile, the performance and experience we had on the desktop via ethernet was excellent.

To help track down the issue, we enabled QoS prioritization on the Nighthawk X4S so we could monitor the bandwidth used by each device. Ethernet connected devices would reach the neighborhood of 30-40 Mbps throughput during a Stadia session. Upon switching to Wi-Fi, however, all devices appeared to cap out at just 11 Mbps. Google notes that 10 Mbps is the minimum recommended speed and corresponds to a maximum resolution of 720p. 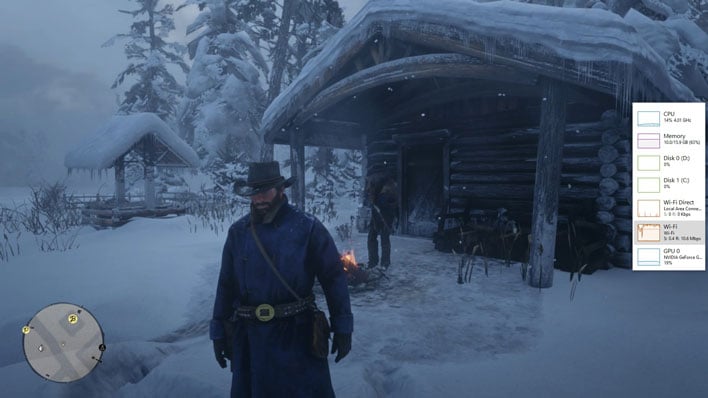 If we go into Stadia’s data usage settings and select “Limited data usage”, then play over Ethernet, we find ourselves with the same poor experience. We also find the maximum bandwidth used is also only 11 Mbps. Something was causing Wi-Fi connections to override our “Best visual quality” selection.


Local Network Optimizations For Stadia May Be Required

After more testing, we spotted the problem. Our Nighthawk X4S had “Smart Connect” enabled which broadcasts the 2.4GHz and 5GHz bands under the same SSID and automatically assigns devices to what it thinks is the more appropriate network. While it was correctly assigning our computers, phones, and Chromecast to the 5GHz band, the Stadia controller found its way - as an “unknown” device - onto the slower 2.4GHz band. We then disabled the 2.4GHz radio entirely and immediately started getting speeds and quality on par with wired connections.

We would not normally devote a block of a review to cover our troubleshooting, but this is an issue many others are likely to encounter. We still cannot say for certain “why” the 2.4GHz band causes the quality to drop out. It has more than sufficient bandwidth otherwise to support a 4K session. We hope this is merely a bug and not a limitation of the platform.

With all of that sorted, we were able to assess how Stadia really performs over Wi-Fi. There are three effective experiences to consider: the 4K “Pro” user, the 1080p “Base” user, and the 720p “Limited Bandwidth” user.

Starting at the low end, if you are a Limited Bandwidth user either because of poor internet options or oppressive data caps, the Stadia service is not for you. In fact, if you have any level of data cap, Stadia is likely to burn through it even with 720p enforced. At 11 Mbps, users are still looking at 4.5GB of data usage per hour.

There will also be times otherwise Pro or Base users will find themselves wanting to play with a throttled connection. This tier can work for slower paced games like Gylt and Farming Simulator 2019, but trying to play tightly timed games such as Mortal Combat or Destiny 2 will leave users frustrated. Visuals mostly appear soft and washed out, while the compression artifacts give a film grain effect. 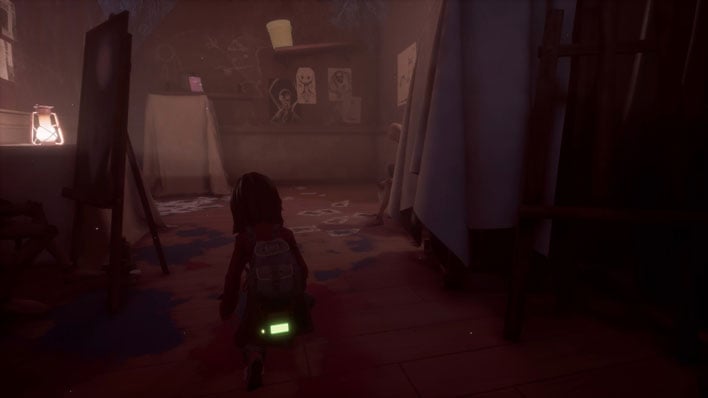 Stadia starts to shine if your internet connection has 30 to 40 Mbps to spare. The Base free tier's 1080p 60fps gameplay looks great. While Google's servers may not be serving up Ultra quality for all titles, the fidelity is good enough to enjoy all the games we played. The visual "sins" of compression and grain are not nearly as apparent here.

Latency is handled surprisingly well. We tested the device in a rural area where latency is always an issue. On the desktop, we sensed only a couple of frames of delay - we have experienced worse with consoles on televisions that are not set to Game Mode. We had no issue with aim in Destiny 2, for example. Wireless connections are more prone to dropping frames. Depending on the disruption, these can last up to a second, but are typically momentary. The dropouts may also be accompanied by a downscaling of the resolution as Stadia attempts to compensate for lost bandwidth. These interruptions can occur over wired connections, but we found them to be far less common when wired.

We did not simply test Stadia in a vacuum. We also compared a few titles to their desktop counterparts. Our test system is a modest gaming rig with an Intel Core i7-8600K, NVIDIA GTX 970 4GB, 16GB of DDR4 memory with the resolution also set to 1080p. In Destiny 2, we were able to dial in Ultra graphics and still keep above 60fps most of the time. This results in significantly crisper visuals than Stadia can produce. Furthermore, the controls are noticeably snappier when compared side-by-side. 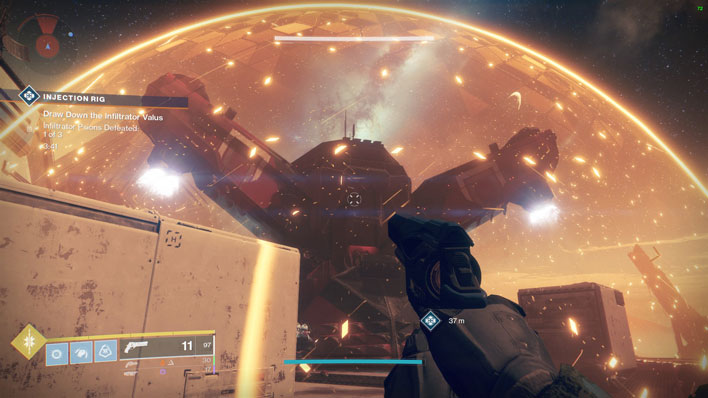 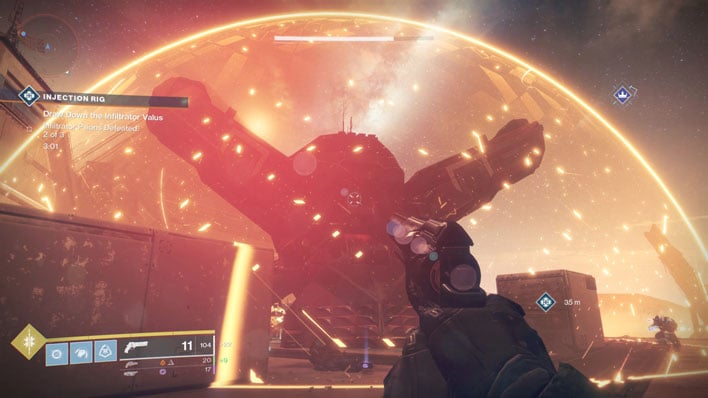 There are some intangible aspects of the Stadia experience we enjoyed. For starters, Stadia does not put a significant load on the system and as a result, the fans do not need to spin up to cool it. Games are also immediately able to play upon purchase and patches are applied seamlessly.

With the Stadia Pro subscription, the resolution limit is increased to 4K. That does not necessarily mean you will be getting 4K visuals, however. Some titles, such as Destiny 2, are rendered at a lower resolution and upscaled rather than rendering at 4K natively. Regardless of upscaling, the 4K image shows more compression artifacts than we see at 1080p. The primary reason for this is that the 4K option does not increase the peak bandwidth (30 Mbps) despite having four times the number of pixels. 4K is technically more detailed, but only by a slim margin. It is also more prone to framerate drops and input lag. This makes the prospect of paying for the Pro subscription questionable. 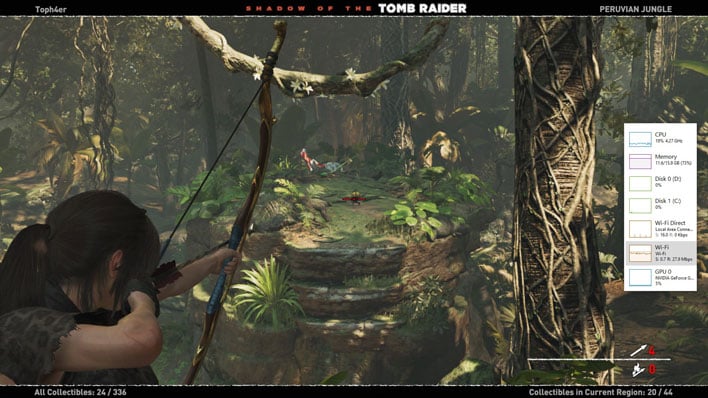 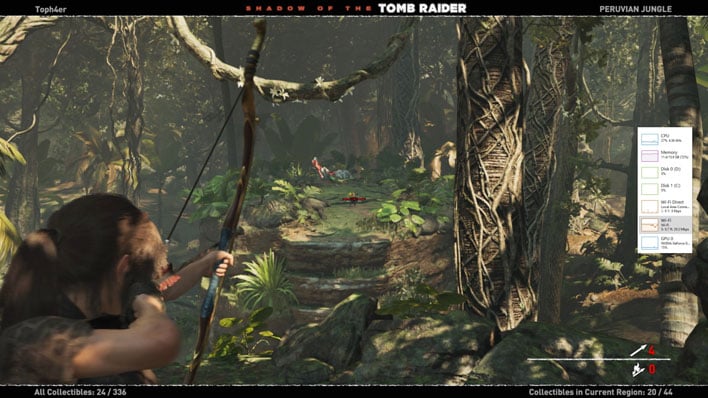 All of the above applies when Stadia is the only application using bandwidth, but often users will be multitasking or sharing a network. Some people like to game with their favorite YouTuber or Twitch streamer in the background. There may be updates or downloads ticking away. In these cases, Stadia's shortcomings worsen. Even on our 400 Mbps connection, a simultaneous YouTube video on the same system was enough to cause some level of instability. Large downloads and torrents bring Stadia to a standstill. We expect this to be an even greater issue on slower or shared connections. QoS tuning may help in some cases, but many of these services categorize Stadia simply as web or Chrome traffic making prioritization iffy.

From a price perspective, Google Stadia is attractive at first glance. Unfortunately, Stadia Base is currently unavailable. The $130 price tag on the Stadia Premiere edition bundle might be better put towards an entry-level graphics card upgrade for an otherwise vanilla PC. Users can expect comparable 1080p performance from a sub-$150 NVIDIA GTX 1650 GPU. However, Stadia has other advantages a graphics card upgrade alone cannot match. 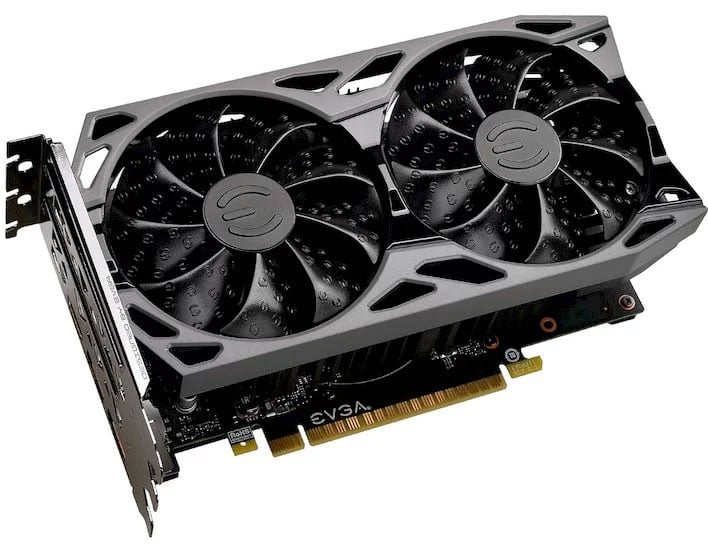 Stadia's hallmark feature is its ability to play on most devices you already have. You can seamlessly jump from your computer to your phone and then to your television all without missing a beat. However, if all this is happening within your home and on the same network, then Stadia is not unique either. Both NVIDIA's GeForce Experience and Valve's Steam Link allow you to stream a game from a powerful PC to other devices on your network. Neither of these options require you to repurchase your gaming library to enjoy either. In fact, Steam Link can stream most applications and games from your computer even if they were not acquired through Steam.

Stadia does afford geographic freedom, of course. It can be nice to drop into a quick match during a lunch break or while on a trip without needing to haul any additional gear. Nevertheless, you are likely to have even less control over network conditions. 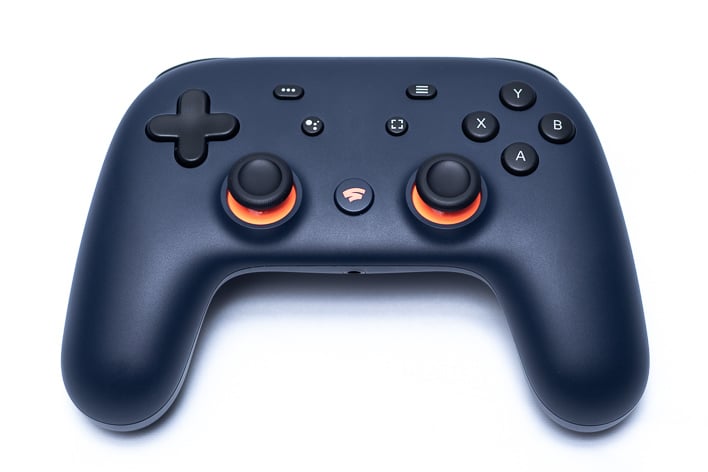 Stadia does an excellent job of allowing you to forget about all the meta aspects of gaming -- no installation media, no downloads, no updates, and no waiting. At any time you can flip open Chrome and start playing in seconds. However, Stadia's wholly separate game store is a difficult pill to swallow. Some games on Stadia are not worth their full $60+ price tags when the platform cannot deliver their full experience. You can play most PC and console games offline in some capacity. This is inherently impossible for Stadia. We would love to see Google join forces with another publisher to create a purchase model where you can play your game either via Stadia or natively on another system. We would not even mind if Stadia's Pro subscription was required to access this. 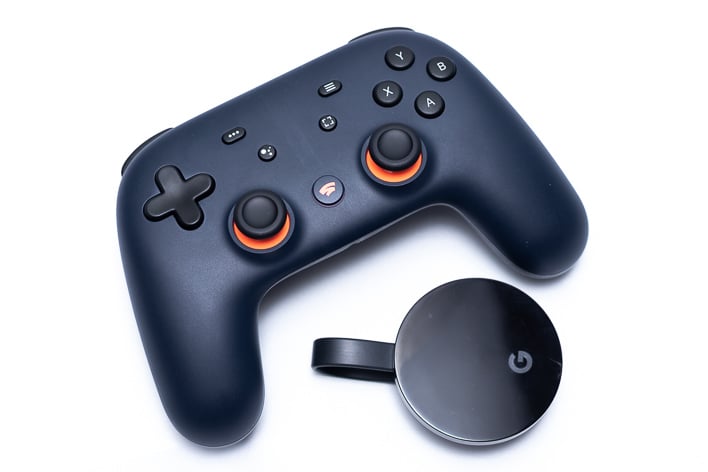 We look forward to seeing how Stadia and other game streaming services develop. Google has made a commendable effort here, but there needs to be several key improvements before it can earn our recommendation. Nevertheless, we have enjoyed playing games on it at the drop of a hat, so if you are curious about the platform, we do suggest checking it out.