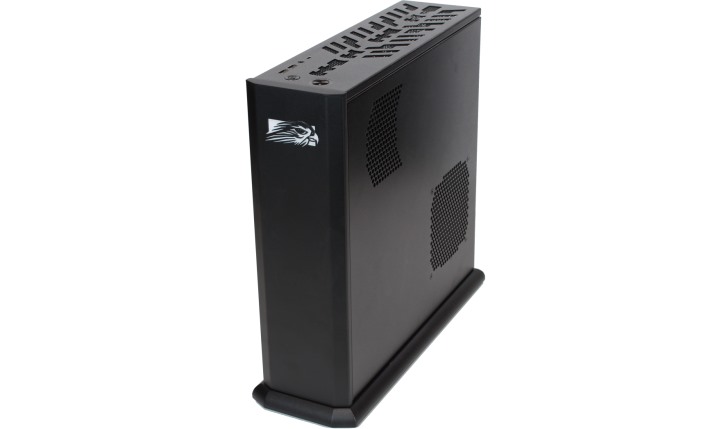 Before we get into any kind of performance benchmarking, the first tests we do with every machine are stress tests. This lets us make sure that nothing went wrong in shipping or manufacturing and that the computer's parts are performing as expected. It would be a darn shame to do a raft of benchmarks only to find out that your GPU was thermal-throttling the whole time.

Thermal testing goes right along with power testing, as to generate the most heat, you need to use the most power. It's simple physics. Our power measurements are done as total system power using a Kill-A-Watt device between the mains power cable and the wall. This gives us an idea of the real power usage of the system, which is more useful than specialized component power measurements when looking at a complete system like this.

For idle power, we simply let the system rest at the Windows 11 desktop, idle. The idle power figure in the chart below is not the absolute lowest value we recorded, but represents the average of low values over a 1 minute period.

For peak power, we instead ran the most brutal torture test we could imagine: Prime95's Small FFTs test along with Furmark running concurrently. This is not a realistic scenario that users are likely to encounter, as even a crypto-mining workload will not generate this kind of power usage, or heat. Still, it serves as an extreme top-end for the system's power consumption. 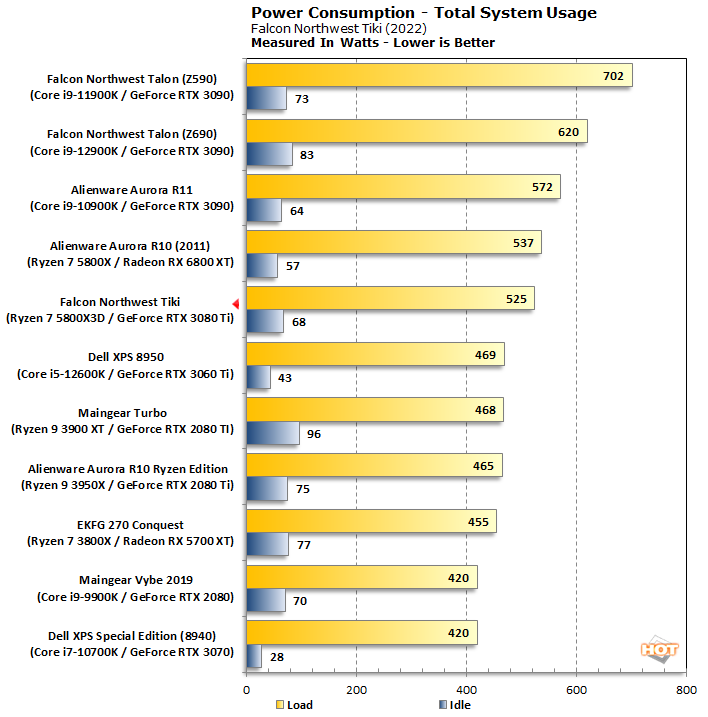 Both power figures come in more or less exactly where we'd expect them to be. The Tiki's GeForce RTX 3080 Ti actually has a higher rated TDP than the Radeon RX 6800 XT in our Alienware Aurora system, but the slightly lower power consumption of the lower-clocked Ryzen 7 5800X3D CPU is probably helping the Tiki to come in slightly below that system. The Tiki's peak power consumption of 525 watts isn't exactly low, but considering the gaming prowess on offer it's actually downright svelte. Gaming power consumption was closer to 450 watts.


As usual, during our torture test as well as during gaming, we monitored temperatures and noise levels. The best news is about noise—there isn't much. Shutting off every other device in the lab we managed to get the noise floor down to 42 dBa, and weren't able to register anything above that on the noise meter with the system idle, as expected. Under full torture test load, we registered 62 dBa. With the Tiki up on the table next to you, but you won't hear it much under a desk or at a distance. 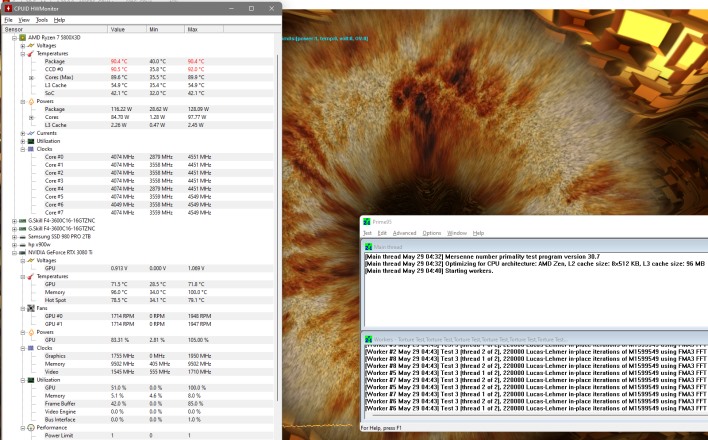 You probably won't want to put the Tiki under a desk, though, and not just because it looks pretty stylish. During our torture test with a 24°C ambient temperature, we relatively high CPU temperatures up to 92°C. That's above the AMD-specified operating temperature of 90°C, and indeed, the CPU did downclock slightly (about 200 MHz) to stay under the rated temperature spec.

If this were a workstation machine, or another system intended for scientific usage that would hammer the CPU cores like Prime95 does, we would definitely mark points off for this. However, the fact is simply that Prime95 is not a realistic workload for most users, and certainly not for gamers. The highest CPU temperature we saw while gaming was just 82°C—higher than we might like, but certainly not high enough for concern, and par for the course with such a small form factor system that simply can't hold a larger cooler.

On the GPU side of things, temperatures were much better. That's not surprising at all considering the massive amount of airflow afforded the graphics card in the Tiki's chassis. In fact, our GeForce RTX 3080 Ti card doesn't even heat up much when overclocked, but we'll take a look at that later.

The boot drive (and singular storage device) in the Falcon Northwest Tiki that we received is a 2TB Samsung SSD 980 Pro PCIe 4.0 NVMe SSD nestled snugly into an M.2 socket under a sizable heatsink. This won't surprise anyone who pays attention to PC hardware, but it's pretty damn fast. We knew that too, of course—not least of which because we've already reviewed the SSD 980 Pro. We still wanted to make sure it runs properly, of course. 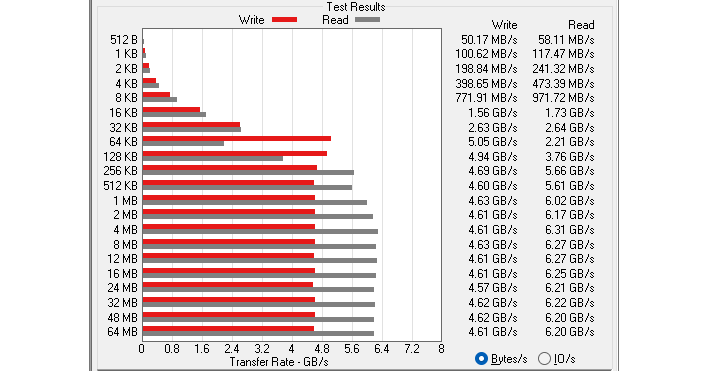 There's not much to say about Falcon's selection of SSD here; when you're building a top-class, high-end rig like this, the SSD 980 Pro is kind of a 'default' choice. Purchasers can elect to get a cheaper Crucial P1 SSD, or go for an even faster Seagate FireCuda 530 drive in 4TB capacity. As we mentioned on the last page, you can also get a Tiki with a second M.2 drive from any of these choices, as well as a SATA HDD, or SATA SSDs alone or in pairs. Total storage available maxes out at 24 TB—not bad for a system smaller than a big shoebox.

Some companies may not like it, but Cinebench isn't a purely synthetic benchmark. It's based on a real application, Maxon's Cinema 4D modeling software, and measures rendering performance under that workload. Frankly, we would have liked to move to the latest R23 version of the application, but we don't have enough comparison data on that version yet from other gaming PCs. 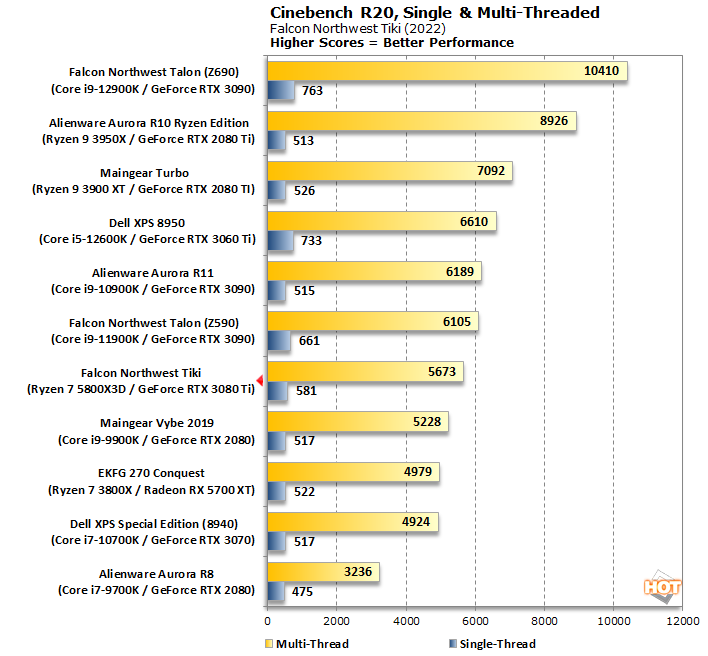 We already knew that the performance of the Ryzen 7 5800X3D in productivity apps is nothing to write home about. Falcon Northwest has done well to configure this machine for maximum performance with the components it includes, but nothing about that is going to make the 5800X3D a screamer in Cinebench.

Speedometer is a test of web application performance. You know all those apps that run in a browser tab, like Slack, Discord, Google Docs, and even YouTube? Speedometer gives you a decent gauge of how those apps will run on a given system in a given browser. Indeed, results vary tremendously between browsers, and even between different browser versions. All of our tests here were done on the latest version of Microsoft Edge. 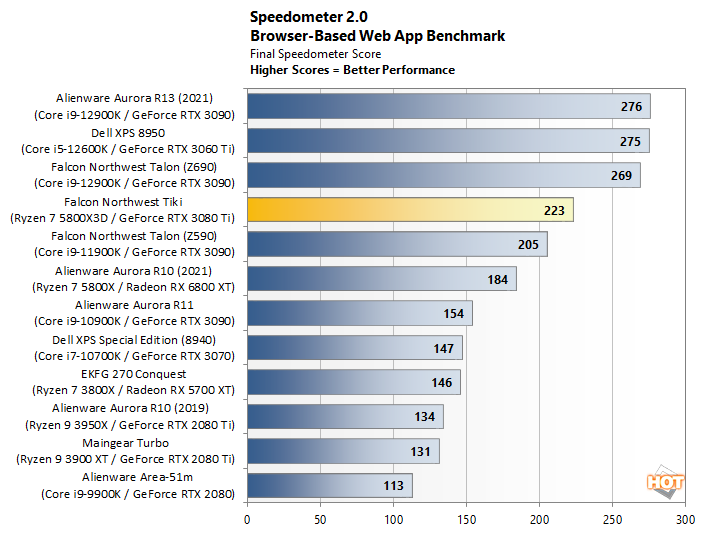 Clearly at least some of the tests in the Speedometer benchmark like the extra cache on the Ryzen 7 5800X3D, as it comes out well ahead of the original-recipe chip in the Alienware Aurora R10. However, take these results with a grain of salt, as a test-bench system with a Ryzen 7 5800X scores just one point below the Tiki's results. It's likely that there have been some major software optimizations since we performed those tests last year.

In any case, the Tiki comes out as the fastest system in our benchmarks that isn't sporting an Intel 12th-gen CPU. Web apps seem to really love the extreme single-threaded performance of Alder Lake, and an extra 64 MB of cache doesn't help enough to overcome the IPC deficit. Still, 223 is an excellent result; web apps on the machine feel super quick and responsive.

Even after all these years, we've found that PCMark still gives a decent idea of what kind of performance you can expect in non-gaming applications. The latest version includes quite a few tests surrounding tele-conferencing functions—quite important in the new post-pandemic world. As with the rest of our benchmarks, we ran PCMark 10 three times, and took the mean of the results. 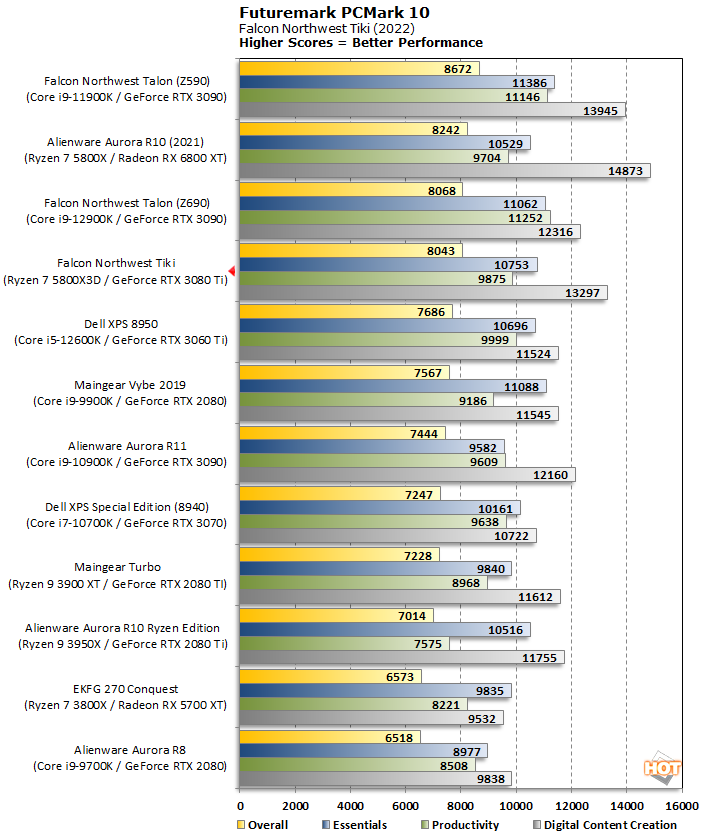 Even though it is a purpose build gaming rig, the Tiki still comports itself well in PCMark. A solid overall score is bolstered by an extremely high Digital Content Creation score, aided by its super-powerful GeForce RTX 3080 Ti GPU. The productivity score lags a bit, as expected, but it's not enough to hold the Tiki back from scoring in the upper echelons of our test systems.

Indeed, all this productivity and system benchmarking is delaying us from delivering the real story with this system, and that's its explosive gaming performance. Let's go have some fun with the Tiki, shall we?