Microsoft seems to have their head in the clouds, or rather, their games are in the cloud now. Today, Kareem Choudhry, corporate VP of cloud gaming at Microsoft, announced that Xbox Game Pass Ultimate users across 22 countries will be able to play more than 150 games via the cloud starting tomorrow.

Earlier in August, we reported on Project xCloud being rolled into Xbox Game Pass, and it is finally here. Gamers around the world will be able to transfer gameplay across their Xbox consoles and to other devices, such as mobile phones and tablets. Not only will this allow for gameplay anywhere, it will also open Xbox gaming to those who do not have an Xbox. As long as you have a decent internet connection and Xbox Game Pass Ultimate, “gamers need only an Android phone or tablet and a supported controller to join in on the fun of Xbox gaming while enjoying the full benefits of the Xbox ecosystem.” This mobile “ecosystem” will also allow gamers to use cross-play so they can game with their PC friends. 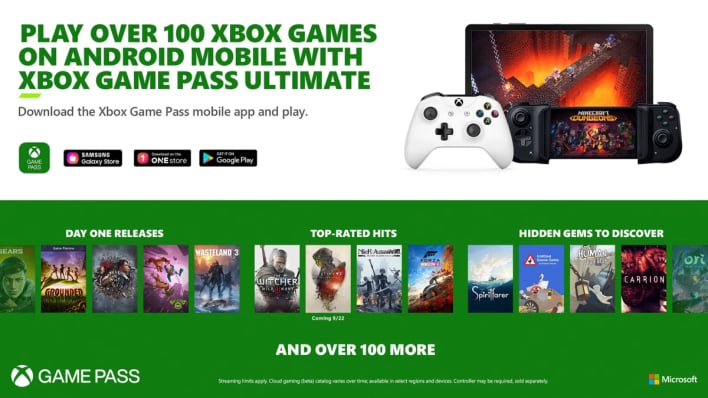 The new cloud library includes a plethora of games such as Destiny 2, Forza Horizon 4, Halo: The Master Chief Collection, Minecraft: Dungeons, and many more. As it stands, that library of games could change as feedback is received over time. Last week, we wrote about Xbox Game Pass Ultimate getting a free upgrade of EA Play, so perhaps we will see EA games being streamed from the cloud too.

Though it has a smaller library than PlayStation Now, this new way to play from Xbox seems significantly more versatile overall. Gamers of all types will be able to enjoy the titles in the cloud library from any device they own, making Xbox a solid platform to be a part of. If Microsoft keeps up what they are doing, they are sure to have a great Xbox experience come this holiday season when the new Xboxes launch.