Microsoft this morning announced Xbox Game Pass Ultimate subscribers will be able to stream games from their Android smartphone or tablet starting on September 15th. At launch, there will be over 100 games available to select from across a wide variety of genres. The service, however, will still be in beta as Microsoft works to ensure the stability of the platform.

Gamers will be able to enjoy full, console-caliber games anywhere they have a fast-enough Wi-Fi or 4G LTE/5G connection. In addition, gamers can pick up where they left off when switching from a console to an Android device, and vice versa. All of your savegame progress, achievements, controller settings, friends list, etc. are stored in the cloud to make this possible. The company also intends to make games available for cloud streaming on the day of release, which is great to hear for anyone interested in this Xbox Game Pass Ultimate perk. 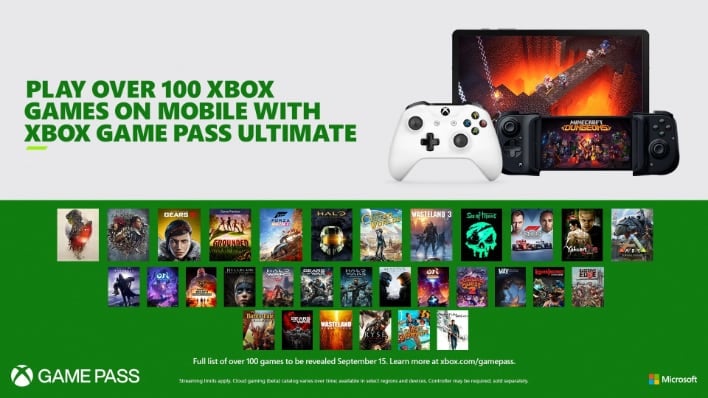 "Cloud gaming also unlocks new couch co-op experiences with traditional online games. Sail off to adventure in Sea of Thieves on your tablet while a friend plays alongside you on console, right in the same room," writes Microsoft. "Just pick up your phone or tablet and play the games you want, any time you want.

Microsoft has partnered with a number of third-party accessory makers to product dedicated clip-on controllers (including Razer, PowerA, 8BitDo, and Nacon) for Android smartphones to support cloud gaming, and existing Xbox-branded wireless controllers are also compatible. And in a showing of gaming solidarity, you can even use a Sony PlayStation DualShock 4 controller if you wish.

At this time, Microsoft says that its cloud gaming beta will launch next month in 22 markets after its successful preview period in North America, Europe, and South Korea. Xbox Game Pass Ultimate is available at a cost of $14.99 per month ($1 for the first month). For those of you that have been enjoying the Project xCloud during the preview period, your access will be revoked starting September 11th.