Upcoming Meteor Storm Will Be Intensely Spectacular, Here's Where And When To Watch

The upcoming Leonid meteor shower should produce an incredible show of streaking lights across the midnight skies. If you are wanting to see some of the show, then it is best to know when and where viewing will be at its peak.

The Leonid meteor shower happens each year in the month of November. This year it is expected to last from November 6-30th. This leaves you plenty of time to catch some of these fireballs as they dance across the sky. Even though the moonlight will wash out many of the meteors you would otherwise see, there will still be plenty that are viewable until the end of the month.

The meteor shower is produced while the Earth is intersecting with the orbital path of Comet 55P/Tempel-Tuttle. The comet itself is a great distance from Earth, but it is littered with bits of debris (not to be confused with the debris from Russia's controversial space missile test). It is this debris that actually produces the streaks of light as they vaporize entering the Earth's atmosphere. Frictional forces heat the particles and the surrounding atmosphere and that produces a visible meteor.


So, where should you go to watch the Leonid meteor shower? You can more than likely view the show from the comforts of your own backyard, but the best place to watch is away from as much light pollution as possible. If you are wanting the optimal viewing experience you may want to jump into the car and head out into the countryside. City, state and national parks often are located in areas with little light pollution. These can also offer a safer environment as they are likely to be patrolled. But anywhere you can find that is away from the glaring city lights should be fine. 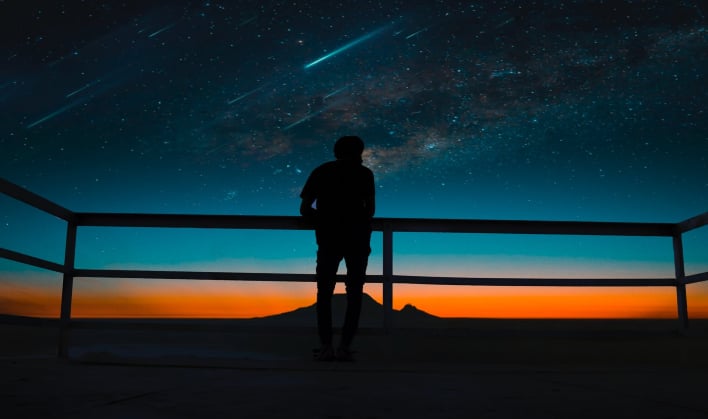 As for what time to watch, midnight to around 3-4am will be the best time for most. This is when the night sky will be at its darkest. You may want to take a quick nap beforehand to give yourself the added boost it might take to keep you awake that long (and perhaps a cup or two of coffee). If you are not able to stay up that long, then you may still see a few in the late evening and early morning hours as well. And if you do get up before dawn, you can also enjoy the treat of the rising sun as it peaks out to say good morning to the world.

As for the where in the sky to look, In the case of the Leonid meteor shower, you will want to locate the constellation Leo, from which the shower's name originates. The meteors will radiate outward from the area of stars that represent the Lion's Mane. If you are able to, you might be able to trace the paths of Leonid meteors backward on the sky's dome, as they seem to come from close around the star Algieba within the constellation. But even if you are not adept to astronomy, don't worry. The meteor shower will appear in all parts of the night sky.

While the actual peak of the Leonid meteor shower ended this morning for most, you should still be able to view plenty of shooting stars throughout the end of the month. So grab a blanket, and spread it out on the ground in the middle of nowhere. Then lay back and watch a show that only Mother Nature herself can provide.