This past Tuesday evening, folks in the southeast United States had a rare opportunity to see a fireball race across the evening sky called an earthgrazer. This comes in the midst of the Taurid meteor shower that occurs around this time every year..

An earthgrazer is a meteor that grazes a long distance across the upper atmosphere of the the Earth due to its low trajectory. Some of these earthgrazers will actually skip off of the Earth's atmosphere, sending them back out into space. The one that was seen traveling across the lower southeast of the US this past Tuesday did not do that, however. It could be seen as it traveled 186 miles across Georgia, Alabama and ending just above the town of Lutts, Tennessee.

The path of the meteor was in fact so long that NASA Meteor Watch reported that its automated software was unable to handle all the data. At first it was believed the meteor only traveled 91 miles through Earth's atmosphere, but after reanalyzing code it discovered it traveled the an incredible 186 miles. NASA was able to catch the meteor's path with 3 meteor cameras, as seen below. Most recently fireballs were seen slamming into the atmosphere of Jupiter and emitting a show from outer space. 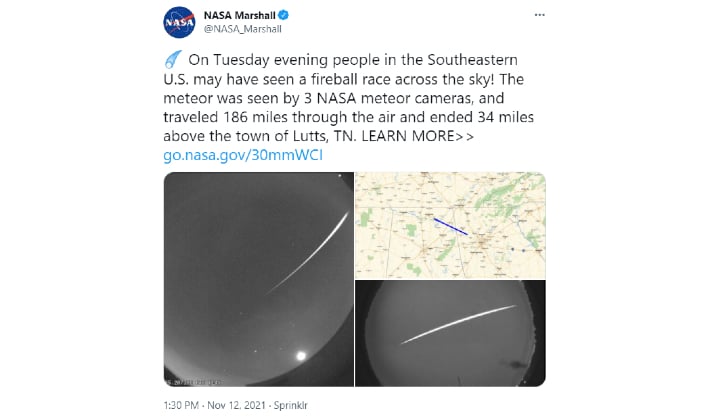 One of the most famous earthgrazers is referred to as the Great Daylight Fireball of 1972. It lit up the daytime sky as it actually skipped off the Earth's atmosphere like a skipping stone off water. People from Utah in the US, all the way up to Alberta, Canada witnessed the incredibly rare sight. It is believed that it was possibly the size of a small truck and if it had struck Earth's atmosphere more directly it would have created a very impressive airburst. The possible size of Tuesday's meteor has not been commented on as of yet.

Those who enjoy watching the night sky for what many call "falling stars" are in luck this time of year. Each year between September and November, the Earth passes through debris left behind by Comet Encke. As the dust associated with the comet hits the Earth's atmosphere at an incredible 65,000 mph, it burns up and creates what is known as the Taurid meteor shower. So if you missed the amazing earthgrazer this past Tuesday night, do not quit looking up. You are likely to see more fireballs light up the night sky the rest of this month.