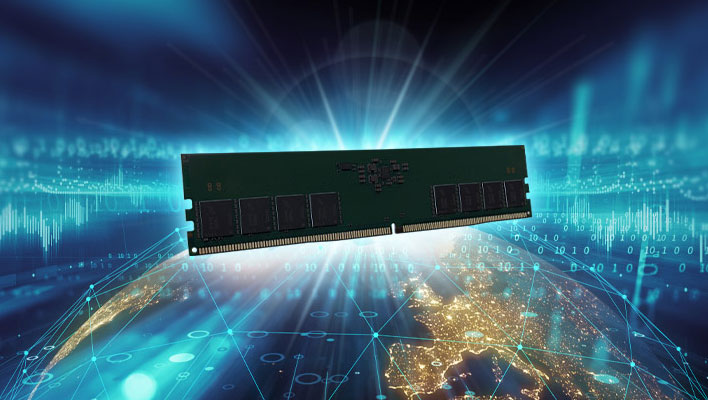 The clock is ticking on DDR4, and TeamGroup is eager to adopt the next-gen DDR5 memory standard as quickly as possible. As such, the memory announced today that it will be releasing its first "Elite" branded DDR5 memory product in the second half of next year. In the process, TeamGroup may have also tipped what AMD and Intel have planned for next year, because it is working with both semiconductor companies on this release.

"TeamGroup has made ample preparations in 2020 to take the lead in the DDR5 market and will coordinate its releases with the DDR5 platforms of the top two CPU manufacturers, Intel and AMD. The company’s DDR5 memory is expected to be available as early as Q3 2021," TeamGroup said.
We already know that Intel's 11th generation Core processors based on Rocket Lake will stick with DDR4, with Rocket Lake-S desktop processors topping out at 8 cores and 16 threads. It will also be Intel's first consumer desktop product to feature PCI Express 4.0 support (up to 20 PCIe 4.0 lanes), via a new 500 series chipset.
While not officially confirmed, it was already expected that Intel's hybrid Alder Lake processors will adopt DDR5 support, and TeamGroup's announcement reinforces that notion. Meanwhile, AMD has already launched its initial Zen 3 produces (Ryzen 5000 series) without a new chipset, but next year's launch of Zen 4 could very likely see the adoption of DDR5.
Another clue is TeamGroup's branding. Data center products do not normally have names like "Elite" attached to memory and storage gear, so the assumption here is that TeamGroup is referencing a consumer release. And to that end, this will be a 16GB DDR5-4800 module operating at 1.1V (down from 1.2V of the previous generation).
Workstations are also fair game, it seems, with TeamGroup touting DDR5's baked in error correction code (ECC) capabilities.
"Today's DDR4 memory with error correction code (ECC) requires an additional chip installed on the PCB, whereas DDR5 supports on-die ECC, a feature that self-corrects single-bit errors, greatly improving system stability," TeamGroup says.
DDR5 will essentially pick up where DDR4 has mostly left off, in regards to speed and bandwidth. There could be some overlap at the higher end of DDR4 and lower end of DDR5, but the latter can scale higher. How that ends up affecting real-world performance remains to be seen.