Back in July, JEDEC finalized the specifications for DDR5 memory, and laid out a number of key performance advantages over DDR4 including quadrupling the maximum die density to 64Gb and boosting maximum data rates from 3.2Gbps to 6.4Gbps [official]. Today, SK Hynix has announced that it is launching the world's very first DDR5 DRAM chips.

At this point, SK Hynix says that its DDR5 can be rated from 4,800 Mbps to 5,600 Mbps under official JEDEC ratings. This speed improvement doesn't come at the cost of power consumption either; operating voltage is 1.1 volts compared to 1.2 volts for DDR4.

SK Hynix says that its new DDR5 includes error correcting code (EEC) to correct 1-bit-level errors, which is supposed to improve application reliability by up to 20 times. The company also explains that it will be able to assemble modules up to 256GB in capacity using through-silicon-via (TSV) technology. 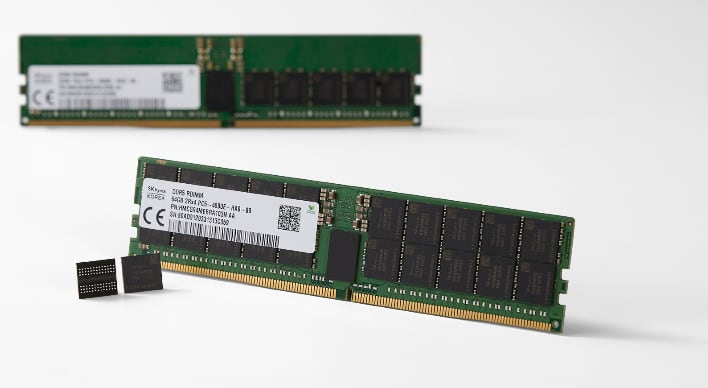 For those that need a refresher on DDR5 here's a full rundown of the differences between it and current-generation DDR4:

At this point, SK Hynix has lined up partners that include Synopsys, Renesas, Rambus, and Montage Technology. Not surprisingly, one of the biggest names in the PC industry has also thrown their support behind SK Hynix's DDR5: Intel. “Intel partnered closely with memory leaders including SK Hynix on the DDR5 spec development starting with early architecture concepts through JEDEC standardization,” said Carolyn Duran, Intel VP of Data Platforms Group and GM of Memory and IO Technologies.

“In addition, we worked collaboratively with SK Hynix on silicon development by designing and testing prototypes to ensure DDR5 meets its performance goals and are fully ready for our mutual customers.”

At this point, SK Hynix is initially aiming its DDR5 DRAM for applications in Big Data and artificial intelligence (AI) instead of the consumer PC market. And that's to be expected, as Intel and AMD haven't yet introduced motherboard platforms and processors that support DDR5. However, both companies have products on their roadmap that will support DDR5 in the future, perhaps in late 2021 or 2022.