While AMD is basking in the limelight with its upcoming Zen 3-based Ryzen 5000 family, Intel doesn't want to be left out of the discussion with its upcoming 11th generation Core processors. Intel previously stated that its Rocket Lake-S processors will debut during Q1 2021, and now the company is giving us some architectural details that will underpin this new family of desktop processors. 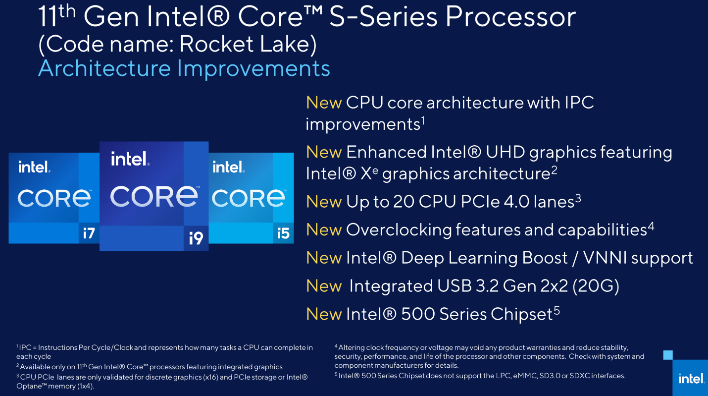 This regression in total cores will probably put Intel at a disadvantage compared to AMD's Ryzen 5000 family, which will be available in 6-core/12-thread, 8-core/16-thread, 12-core/24-thread, and 16-core/32-thread configurations (Ryzen 9 5950X). Despite this, Intel is promising a double-digit increase in instructions per clock (IPC), which should lead to an overall performance boost compared to Comet Lake-S. 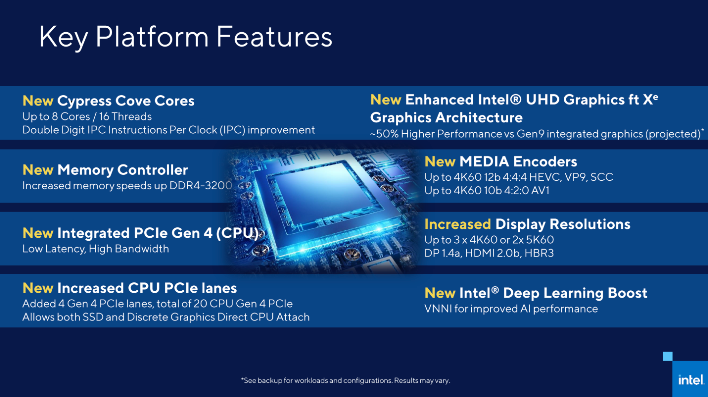 As for the Iris Xe graphics (which was also found in Tiger Lake mobile CPUs), Intel is claiming up to 50 percent uplift in performance compared to the UHD graphics found within Comet Lake-S. Other items of note with Rocket Lake-S include up to 20 PCIe 4.0 lanes (an upgrade over the previous 16 PCIe 3.0 lanes), DDR4-3200 memory support (up from DDR4-2966), USB 3.2 support, Intel Deep Learning Boost/VNNI support, and new overclocking features and capabilities (which haven't yet been disclosed). Intel will also be introducing new 500 Series chipsets to take full advantage of all of the capabilities of Rocket Lake-S, although existing 400 Series motherboards will still support Rocket Lake-S with a BIOS update.

Intel's Rocket Lake-S will be arriving on the scene well after the Ryzen 5000 Series, which launches next month. Ryzen 5000 is no slouch either, promising a 19 percent uplift in IPC over Ryzen 3000, and early benchmarks shows that Intel has its work cut out for it to take on the likes of the Ryzen 9 5950X and even the Ryzen 7 5800X.