Being exactly such a person myself, I can tell you that people with niche interests run into performance bottlenecks you just don't see normally. A key example of such a use-case comes in the form of using graphics cards externally over Thunderbolt. We normally think of the bandwidth between a GPU and its host as a non-factor in performance, but when you're limiting devices to just four lanes of PCIe 3.0—encapsulated within an external interface like Thunderbolt—it can really put a damper on things.


Despite that, user OmegaMalkior over on the egpu.io forums says that his recent upgrade from a GeForce RTX 3070 to a monstrous GeForce RTX 4090 was a massive change. Certainly in a desktop we'd think so, but you might expect that the eGPU installation would cramp the benefits of the bigger GPU. That is clearly the case (judging from the benchmarks he's posted), but not by as much as you might think.
OmegaMalkior has his Ada Lovelace behemoth installed inside a Razer Core X eGPU enclosure. He had to replace the power supply, as the original PSU simply does not offer enough connectors for the RTX 4090's power adapter. Swapping it out with a Corsair SF750 small-form-factor PSU (equipped with a native PCIe 5.0 power cable) got him running again within the same enclosure, and he says that after swapping the PSU, "it was plug'n play."


The Core X is hooked up to his ASUS Zenbook 14X Space Edition laptop with a Core i9-12900H 45W CPU. That chip may not have the multi-core grunt of big desktop CPUs, but it proves a worthy companion for his desktop GeForce RTX 4090 with an external laptop cooler in place, as the performance is limited in some cases directly by the PCIe bus.


The intrepid modder offers the example of Doom Eternal as a game that is hard limited by the PCIe bandwidth available to the eGPU dock. Even with every setting maxed-out in 5160×2160 resolution using DLDSR with 2.25x scaling, he is unable to cap out GPU usage for the RTX 4090. However, he also mentions Halo Infinite running smoothly in the same resolution at 120 FPS. Quite impressive for an eGPU and a 45W laptop CPU. 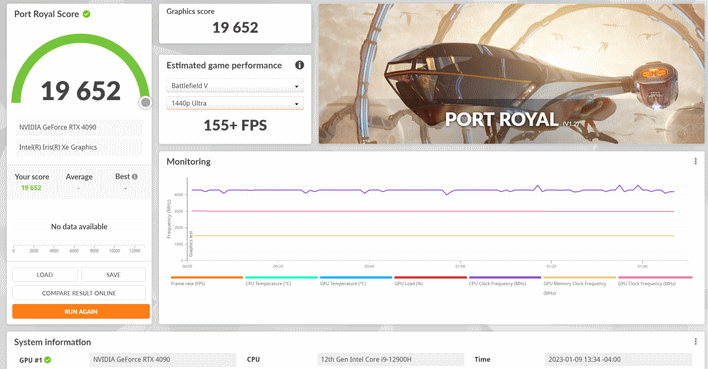 
Interestingly, it seems like OmegaMalkior's setup was initially getting less performance than expected compared to a friend with a similar configuration. He apparently resolved this issue by doing a clean install of Windows 11 22H2 instead of the 23H2 preview build that he was using. Let that be a word to the wise for gamers that want to run the latest, bleeding-edge software.


OmegaMalkior says that he's currently playing through the Crysis Remastered trilogy and that "performance is pretty decent," although he admits he has to turn down a few settings to reach the high refresh rates supported by his Alienware AW3423DW display. He doesn't elaborate whether his performance woes are CPU- or eGPU-related, but we can take a guess.
Images in this post owned by OmegaMalkior @ egpu.io.