It's been a long wait, but the God of War franchise is finally headed to PC after being exclusive to PlayStation consoles for so many years. The much-anticipated release is now just a few days away. When it arrives, you'll want to install the latest GeForce drivers from NVIDIA to get the most out of the game, provided you own a GeForce GPU, of course.
In a somewhat unusual move, NVIDIA is talking about its upcoming driver update before it lands. This goes to show just how big the God of War release figures to be. It's also because NVIDIA's next GPU driver update sounds like it will be a pretty big one as well, with some features and tweaks that extend beyond God of War.
As it applies to God of War, however, the next update is a 'Game Ready' release, meaning it's been optimized for the upcoming game to deliver the best performance and overall experience. In addition, it introduces support for its Deep Learning Super Sampling (DLSS) and Reflex technologies right out of the gate.

"By installing our January 14th Game Ready Driver, you’ll optimize your system and enable support for NVIDIA DLSS, accelerating performance on GeForce RTX GPUs. And on GeForce GTX 900 Series and newer GPUs, you can enable NVIDIA Reflex to quickly and easily reduce system latency, making gameplay snappy and responsive for even the most difficult challenges," NVIDIA says.

Driver aside, God of War will bring with it enhanced graphics, exclusive PC features, and HDR support on the PC platform. Here's a look at the system requirements... 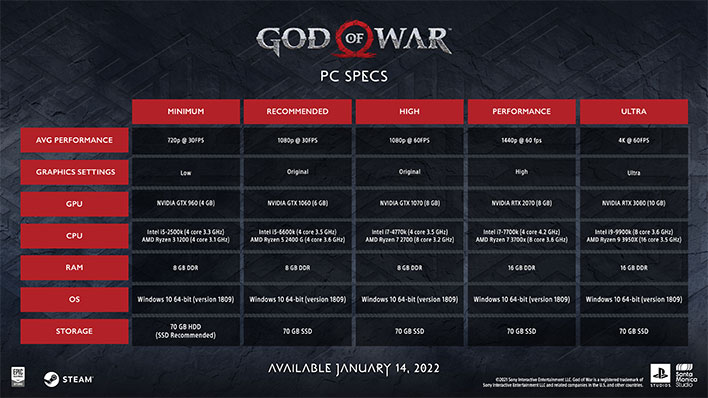 Click the specs table to enlarge so you can actually see the thing, but to the point, you only need a Core i5-2500K or AMD Ryzen 3 1200 CPU, GeForce GTX 960 GPU, 8GB of RAM, and 70GB of storage to play at low settings (720p at 30 frames per second). At the other end of the spectrum, however, running at Ultra (4K at 60 fps) demands a Core i9-9900K or Ryzen 9 3950X, GeForce RTX 3080, 16GB of RAM, and the same 70GB of storage (an SSD is recommended across the board).
NVIDIA's next driver release is also Game Ready for Rainbow Six Extraction (also with DLSS and Reflex support), and includes optimizations for Hitman III Year 2, The Anacrusis, GRIT, and Monster Hunter Rise.
On top of all that, the upcoming driver adds more validated G-Sync Compatible monitors to the mix, brings support for the newly minted GeForce RTX 3080 with 12GB of GDDR6X memory, and introduces DLDSR (Deep Learning Dynamic Super Sampling Resolution).
The driver drops on January 14, 2022, the same day God of War releases to PC.