Most of the time, when a graphics card fails, you'll either return it to the manufacturer (assuming it's inside its warranty period), sell it to someone for parts, or simply discard it. You could, however, send it to a repair shop like Germany's KrisFix. Around the world, electronics enthusiasts are starting repair shops to fix busted PC hardware as these components become more and more expensive to acquire.
KrisFix has been doing his thing a while now, and he knows what he's talking about; he's a trusted resource on YouTube for other repair shops. That's why we give some credence to his concerns about recent Radeon drivers. In a video titled "Are AMD cards dying after a driver update?" he poses the nominative question. 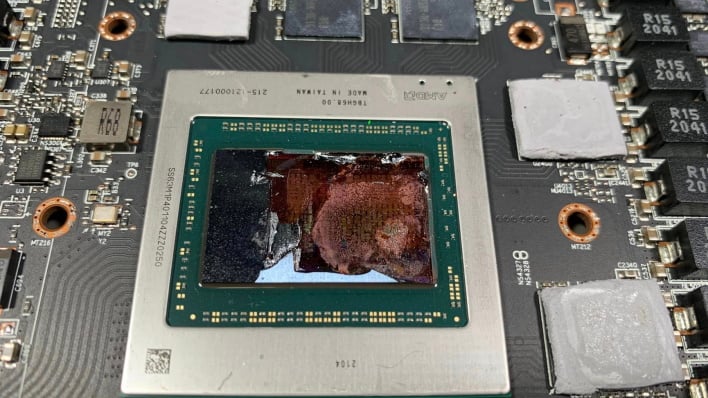 A cracked Navi 21 GPU. This and top image from KrisFix Facebook.


KrisFix states that he's had some 61 dead Radeon cards sporting Navi 21 GPUs come into his shop recently, and of those, 48 had faulty GPU chips. These boards can't be repaired without salvaging the core from another non-working board because AMD doesn't sell the GPUs by themselves, and generally it's easier to repair any other kind of fault on a graphics card than it is to swap the BGA GPU and its thousands of contacts.


Normally, it's pretty rare for a microprocessor to fail at all, but the specific way in which these chips are failing is notable: they're cracking. Yes, indeed—the Navi 21 processor at the heart of these Radeon RX 6800 and RX 6900 series graphics cards is physically breaking. What could cause this? Extreme heat.
KrisFix questioned the customers and came away with little in common between the cases. Customers were playing different games with different settings, or not even playing games at all, but just watching videos or working at the desktop. AMD's drivers have a great many mechanisms in place to prevent this kind of thing from happening, but the common factor that he did find was that every customer claimed to be using the latest 22.11.2 WHQL driver.


With that in mind, then, we return to the question posed by the video: is the latest official AMD driver killing Navi 21 GPUs? It's fairly clear that the answer is "no," or at least, not universally. Here in the labs, we have multiple Navi 21 parts running that specific driver, and haven't had any unusual heat or power problems. Many other users have chimed in on Twitter and Reddit to say the same thing.
However, a few other users have claimed that they either lost a Navi 21 GPU recently, or that their card is experiencing increased heat and power consumption after the driver update. There's also the matter that KrisFix definitely has 48 cracked Navi 21 GPUs on hand; it doesn't make sense that he would fake these failures and risk his reputation just for internet clout. 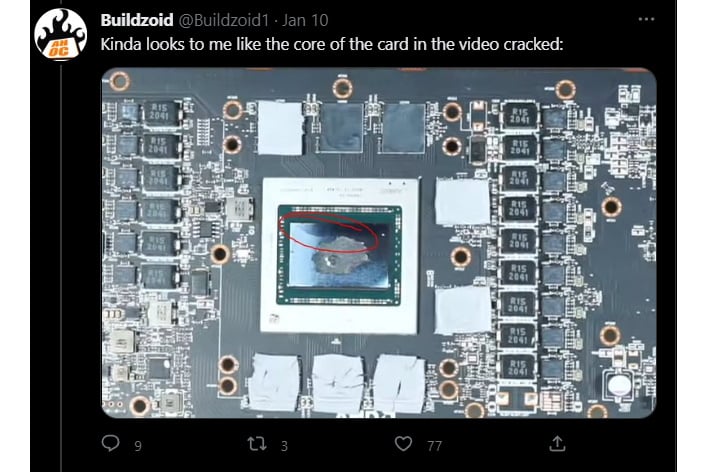 As Buildzoid of Actually Hardware Overclocking notes on Twitter, this wouldn't be the first time a GPU driver has shipped with broken thermal protection. If you have a Navi 21-based GPU—that's everything in the Radeon RX 6000 series from the Radeon RX 6800 on up—we might recommend you to either avoid the latest drivers until someone figures out what's going on, or to simply keep an eye on your thermals and power consumption to make sure they don't get out of control.
UPDATE 01/20/23: KrisFix himself wasn't satisfied with his original theory, and he has now posted a new video where he exhaustively tests a number of ideas. In his testing, he wasn't able to cause another failure, nor to present conditions which might cause this kind of failure. He states that the driver "cannot do damage like this," and now believes that all of these cards were likely stored improperly after being used for mining operations. Accordingly, extreme temperature shock and condensed humidity in a very cold place likely combined to cause these failures.