Puget Systems is a well-known system integrator that primarily offers workstation and server machines to businesses. We're fans of Puget around here because the company frequently releases data from both its own internal testing as well as its experiences in the market. Most resellers and integrators don't share this sort of data with the public, so it's fascinating to see Puget's information.

At the end of every year, Puget releases a report on the most reliable PC hardware of the past 12 months. The most recent report covers products that the company sold in 2021 using reliability data going back as far as three years. Puget separates the data by "shop failures," which are basically DOA items, and "field failures", or items that failed after the customer took ownership of the system.


Reliability data on the components is categorized according to component category as well. Puget revealed reliability information for motherboards, processors, memory, graphics cards, system storage, and power supplies, although the motherboard section is quite short. As Puget states, it simply sold too many different motherboard models to have much useful data. The company spotlight the ASUS Prime X299 Deluxe II for having over 100 units sold without a single failure, though. 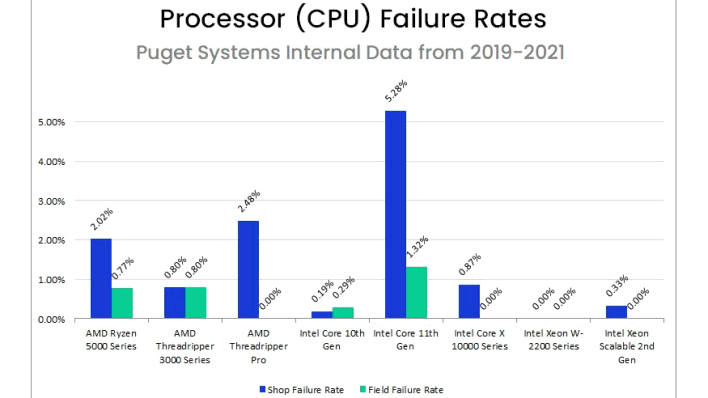 
The processors section is probably the most interesting. Looking at the graph, the thing that sticks out the most is that huge bar for Intel 11th-gen Core processors; apparently some 5.28% of the Rocket Lake CPUs that Puget tested were faulty. That's not a great look for Intel, but Rocket Lake was kind of a hacky product anyway given how Intel had to backport its Cove architecture and Xe graphics to the old 14nm process for which they were never intended.

Actually, even if you take into account the high DOA rate for RKL CPUs, Intel still comes out slightly ahead of AMD in terms of overall failure rates. To be clear, neither company had failures rates that are particularly concerning, but the AMD CPUs do seem to be slightly less reliable overall. If you take into consideration how much more complex the AMD parts are in terms of assembly (with their multi-die packages), it's easy to understand how this could be the case.


The memory results aren't that surprising; DDR4 memory with ECC is more reliable than DDR4 without, and Registered memory is yet more reliable. Given that Puget primarily serves business customers, the company doesn't ship anything faster than DDR4-3200, a speed which was rather far from pushing the limits of DDR4 SDRAM even in the beginning of 2021.
Much more interesting are the graphics card results. Sadly, there's no AMD data here, as Puget Systems only sells NVIDIA graphics cards. There's still a couple of interesting data points, though. First off, that huge 6.78% shop failure rate for the Quadro RTX cards looks bad, but as Puget explains, it's largely due to a specific manufacturing defect.


Enthusiasts should take note of the data point that indicates that NVIDIA's Founders Edition graphics cards had one-third the failures of cards from its board partners. Puget praises the FE models further, saying that their unique cooling design makes them particularly suited to multi-GPU configurations—not particularly useful for gamers anymore, but still quite handy for folks doing crunchy compute work.
The storage section of the data is mainly notable in that every single product Puget sold had shockingly sparse failures. That's particularly true of Samsung's SSDs, which were all at 0.11% failure rate or lower. In fact, the SSD 870 EVO/QVO family of SATA SSDs had no failures whatsoever even though Puget has apparently shipped more than a thousand of them.
Finally, the power supply section is only marginally more interesting than the memory section. The most notable data point here is that Super Flower power supplies are apparently more reliable than EVGA's units, but that's probably not a surprise to enthusiasts who have been around a while. EVGA's units still performed very well. There's also a trend that units rated for higher power output are more likely to fail in the field, but that probably has to do with the way those customers are using those machines more than the units themselves.

Puget concludes the post by awarding its yearly "Most Reliable Hardware" award to Samsung's SSDs, unsurprisingly. This is actually the fourth year running that the Korean maker-of-everything's solid-state storage has won the award. According to Puget, it has sold over 35,000 Samsung SSDs, and less than 100 of those drives have failed. Seems like Samsung really cleaned up its act after the SSD 840 EVO debacle.

You can head over to Puget Systems' blog if you'd like to read its own remarks on the data.