An image of an upcoming triple fan, triple slot, glowing red PowerColor graphics card has been shared by PowerColor on various social media channels. PowerColor is done being coy, and thus here we see a full-frontal picture of a substantial graphics card, which its social media team described as “The darkness dominator: Red Devil.” Also, PowerColor provided us with a few more satanic verses: this time addressing the origin of the Red Devil series.

PowerColor has been highly active with its promotions, between the announcement of the RDNA 3 architecture, the first crop of Radeon RX 7000 series graphics cards, and their release to the eager public. It last teased a Red Devil design just ahead of the official unveiling of the Radeon RX 7900 XT / RX 7900 XTX flagships, then left it about a week to share a quite detailed photo of the ferocious Radeon RX 7900 XTX HellHound, complete with a macabre horror poem.
The pictured graphics card is quite a departure from AMD’s reference design for its upcoming flagships. Those first party designs are quite reserved, sleek and compact (2 slots or less). In contrast, this PowerColor Red Devil cooler might even have enough mass and airflow to calm an NVIDIA GeForce RTX 4090—the triple fan and triple slot plus design certainly wouldn’t look out of place if PowerColor were to decide to play for both teams. 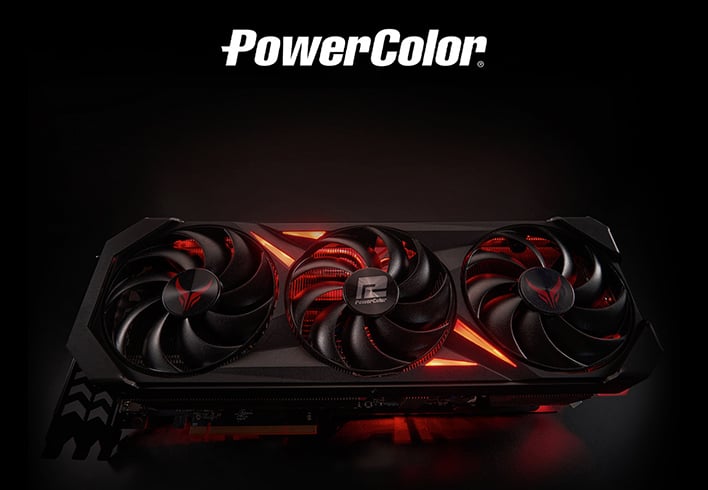 From this slightly lowered perspective view of the fan-side of PowerColor’s graphics cards we can’t see much. For example, the I/O ports are out of shot, as are the power connectors. We also remain unsure whether this is a Radeon RX 7900 XT or RX 7900 XTX. It could end up that Red Devil incarnations of those graphics cards use identical coolers, anyway.
We previously shared the HellHound poem, so it is only fair to reproduce the Red Devil’s, below:

"With its restless desire to rule the universe but no wish to see any light,
Devil 13, the ruler of the underworld created a new Devil to rise from the underworld and master all creatures.
Red Devil as he was named,
known to be the only Devil besides his creator to master all elements of the Pentagram;
Earth, Water, Fire, Wind and Void,
it's presence was feared by all corners of the new world.

Ever since, no one dared to challenge Devil's true gaming empire."

With the NVIDIA GeForce RTX 4090 and RTX 4080 both known quantities now, we are very eager for third party testing of AMD’s latest and greatest GPUs to be published. Remember, the first RDNA 3 graphics cards are expected to become available to enthusiasts from December 13, and cards like the pictured PowerColor Red Devil should arrive at or around this date.