PowerColor is back to its teasing ways. The AMD exclusive graphics card partner shared a clear, glowing view of the backplate of a new Hellhound today. Earlier in the month, we enjoyed a somewhat less revealing view of a new premium Red Devil graphics card. We are still a month away from when the RDNA 3 architecture Radeon RX 7900 XT and 7900 XTX become available to consumers, so we appreciate the cool imagery.
The Hellhound is lower down in the PowerColor ranks than the Red Devil series. While the Red Devil cards offer the best air cooling solutions (and Liquid Devil liquid cooling) plus RGB LED lighting, the Hellhound design is cut to a tighter budget, with a lighter build and single color (blue) LEDs. 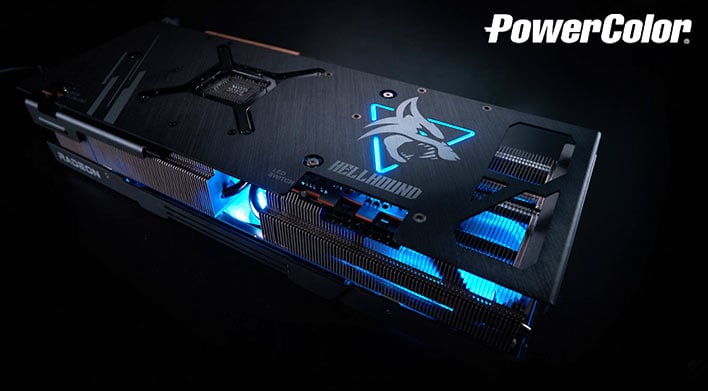 Working down from the top of the Radeon RX 6000 series of graphics cards, PowerColor doesn't start offering Hellhounds until the RX 6700 XT series, and you can see a picture of the PowerColor Hellhound AMD Radeon RX 6700 XT 12GB GDDR6 in the image below. We have chosen an official photo of the backplate for a more direct comparison with the new (unnamed) model.


The new Hellhound looks considerably thicker than its RX 6700 XT predecessor, and comes with dual 8-pin power connectors, so there seems little doubt that PowerColor is teasing a Hellhound model packing either a Radeon RX 7900 XT or 7900 XTX GPU. It is always good to have options, and it may be possible that Radeon RX 7900 XT and 7900 XTX buyers will have PowerColor cards to pick from including Red Devil, Liquid Devil, Hellhound, AMD Reference design, and even Fighter models.
Elsewhere in PowerColor's Twitter teaser image, a hardware switch for toggling the blue LEDs can be seen, nearby the power connectors. There isn't much else to be seen in the image, but this looks like it has triple fans to maintain airflow through the sizable heatpipe infused aluminum finned cooling assembly. PowerColor has been known to make white Hellhounds, with pink fans and white LEDs.
Someone in PowerColor's marketing and social media department has spent some time writing an ode to the Hellhound.

"The keeper of hell: Hellhound
HELLHOUND is born, sharp fangs with razor-like claws, covered with fur that is tough like armor. Its eyes burn in the darkness, allowing it to precisely track and stalk its prey.
It used to be a battle hound kept by a warrior brave. Yet, its bravery did not go unnoticed by the Red Devil and saw a chance to make this hound the keeper of his gates of hell...
This HELLHOUND is silent, not a sound it makes as it guards the gates ready to strike in the darkness with a killer grace...
Once the prey is found, HELLHOUND will take it down, it strikes with stealth on a single stroke!"

As we mentioned above, AMD partners will be able to release their first RDNA 3 graphics cards to the public in about a month's time - or Tuesday, December 13th, to be more precise. We are going to have plenty more teasers and leaks in the meantime, and while you wait it is worthwhile checking out today's updated and in-depth RDNA 3 architecture preview article.