OnePlus 8 Pro: What We Know So Far About This Snapdragon 865 5G Flagship 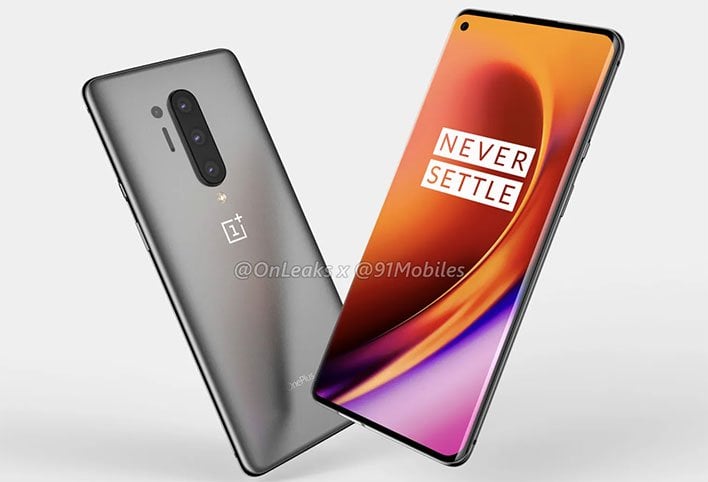 Although the Samsung Galaxy S20 family might have kicked off the Qualcomm Snapdragon 865 festivities for 2020 flagship Android smartphones, it certainly won't be the last new device announced. One of the next smartphones to come down the pipeline will be the OnePlus 8 Pro.

In addition to the aforementioned Snapdragon 865 SoC, the OnePlus 8 Pro will also come with the Snapdragon X55 5G modem. It's said the SoC will be paired with either 8GB or 12GB of LPDDR5 RAM depending on whether you opt for 128GB or 256GB of UFS 3.0 internal storage. On the display front, it's expected that the smartphone's OLED will measure 6.5 inches with an FHD+ resolution and 120Hz refresh rate.

However, there will also be two additional members of the family if the recent leaks are accurate. The mainline OnePlus 8 will still include the Snapdragon 865 + Snapdragon X55 combo, but will get a slightly larger 6.55-inch AMOLED display limited to "just" 90Hz. 6GB, 8GB, and 12GB RAM configurations are rumored along with 128GB or 256GB storage SKUs. Triple cameras are also on the docket for the OnePlus 8 along with a 32MP selfie camera. Also expect to see a smaller 4,000 mAh battery with 30W fast charging support.

There's even word that OnePlus will release an even cheaper model to target the mid-range market with the OnePlus 8 Lite. Rather than rely on Qualcomm Snapdragon power, the OnePlus 8 Lite is rumored to use a MediaTek Dimensity 1000 SoC, which includes an integrated 5G modem. The 6.4-inch AMOLED display allegedly supports 90Hz refresh rates, triple rear cameras, a 16MP selfie cameras, 8GB RAM, 128GB/256GB internal storage configurations, and a 4,000 mAh battery (30W fast charging supported).

If last year's timeframe is any indication, we should expect to see the OnePlus 8 family land sometime in the April-May timeframe. And given OnePlus' long-running value proposition, we expect even the OnePlus 8 Pro to undercut the likes of the "entry-level" Galaxy S20 by a few hundred bucks.