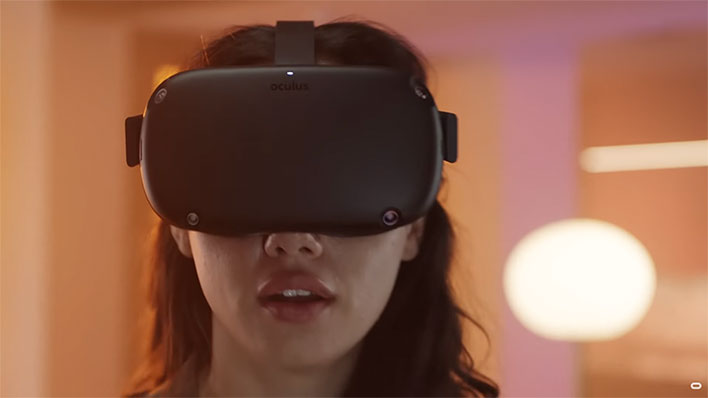 For anyone who is new to the world of virtual reality, the Oculus Quest starting at $399 is a sensible foray into VR. It's not crazy expensive, and it offers a wireless experience with decent all around performance. In addition, users can hook it up to a PC if they want to, and play games designed for the Rift. It's a pretty enticing headset, in other words, but what will the next version bring? Improvements all around, apparently.
Before we get to that, here's a rundown of the Quest's pertinent specifications...
While not exactly on par with a modern PC, the Quest has proven immensely popular—it's been backordered for several months. Even right now, it appears only marketplace sellers have units available, at inflated price tags.
All that said, the Quest will eventually be yesterday's news. People who are familiar with the matter told Bloomberg that Oculus (owned by Facebook) is is building a new version of the standalone VR headset. There are actually multiple potential successors, the sources say, and some of the ones in the advanced stages of testing are smaller and around 10-15 percent lighter. They're also said to have a faster refresh rate.
It's not clear precisely what the hardware makeup will be for a followup model, though if sticking with Qualcomm's hardware, it could arrive with a Snapdragon 865 or Snapdragon 865 Plus (fingers crossed, anyway). More RAM and storage would be appreciated as well, particularly if Oculus can stick to the same price points as the current generation Quest.
Redesigned controllers will materialize as well, the sources claim. As to when we can expect new hardware, they say the original intent was to launch a new Quest headset at the end of the year during the Oculus Connect conference. However, it could be delayed until 2021 because of of the Coronavirus pandemic.