Here's How To Track The Coronavirus Without Getting A Malware Infection

Not all hackers are jerks, but the ones preying on the global population with booby-trapped maps of the coronavirus sure fall into that category. It's just a scummy thing to do. Fortunately, not every interactive COVID-19 tracking map is laced with malware. If you are looking for one that is clean, you now have one more option, courtesy of Microsoft.
The Redmond outfit has added an interactive Bing map that tracks the spread of COVID-19. At the time of this writing, it shows there are 175,049 confirmed cases. Of those, it lists 90,552 as being active, 77,791 as being recovered, and 6,706 fatalities related to the disease. Those numbers will change as time goes on, and possibly by the time you read this.
There's a little information icon in the lower left corner of the map. Clicking it reveals that Microsoft is pulling data from a variety of sources, including the US Centers for Disease Control (CDC), World Health Organization (WHO), European Centre for Disease Prevention and Control (ECDC), and Wikipedia. It's not clear how often it is being updated.
The map breaks down infections by region. Zooming in on the United States, for example, allows you to see how many cases have been confirmed in each individual state. Washington lists the most active cases at 726, including 42 deaths. There are now confirmed cases in almost every state (West Virginia stands as the last holdout, though it's probably only a matter of time before there are confirmed cases there as well). 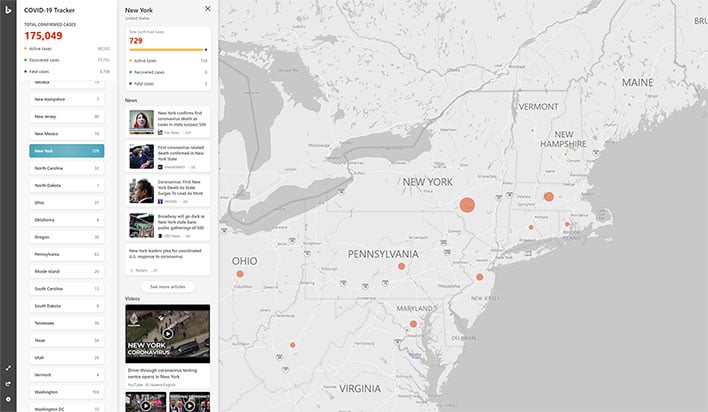 Clicking on individual regions in the left-hand sidebar also brings up a list of related news stories specific to that area. You can also drill down to individual states. Bing does not appear to be doing a stellar job in that regard, unfortunately—when I clicked on New York it pulled four news stories, the most recent of which was already 23 hours old. Two of the others were two days old, and the fourth was four days old.
The impact from the coronavirus is ongoing, and spreading fast. In addition to claiming lives, it has resulted in major conventions being cancelled, including Mobile World Congress, as well as many sporting and entertainment events. And in New York, restaurants and bars have been ordered to close except for delivery and pickup services.
You can view the interactive map on Bing by directing your browser to bing.com/covid.