NVIDIA has some good news for a portion of the more than 70 million gamers who play Rainbox Six Siege, the popular competitive first person shooter. There is a new update available that adds support for NVIDIA's Deep Learning Super Sampling (DLSS) technology, and with it comes a performance gain of up to 50 percent when playing at 4K.
The caveat is that you need a GeForce RTX graphics card to benefit from DLSS, be it a current generation GeForce RTX 30 series based on Ampere, or a previous generation GeForce RTX 20 series card based on Turing. Actually buying a new graphics card is a difficult task at the moment (unless you're willing to pay way above MSRP), so this mostly benefits existing RTX card owners who play Rainbow Six Siege.
If you fall into that category, a simple update could unlock a new tier of performance. We have not had a chance to test this ourselves, but according to NVIDIA's own benchmark figures, a modest card like the GeForce RTX 2060 could see an increase from 74 frames per second to 124 frames per second, providing more headroom for staying about the 60 frames per second mark when the action gets busy. 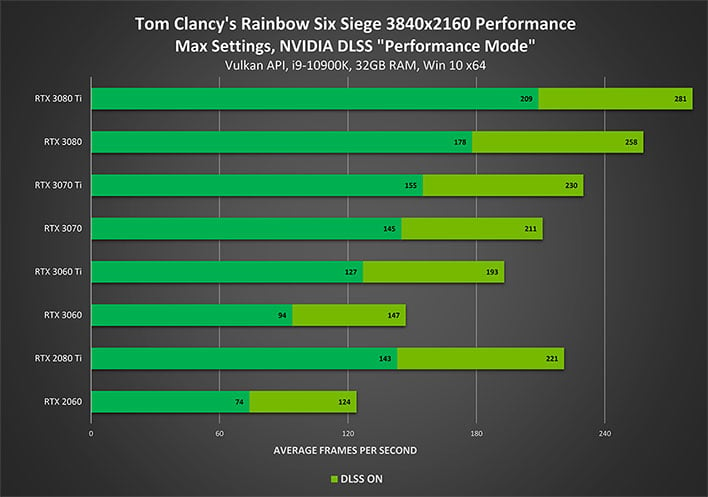 It's rumored NVIDIA is cutting production of the GeForce RTX 2060, to allocate more capacity to making GeForce RTX 30 series cards. Regardless of the validity of the claim, enabling DLSS in Rainbow Six Siege promises to deliver a big jump in performance on all supported graphics cards.
NVIDIA's benchmark figures are based on a test system with an Intel Core i9-10900K processor (Comet Lake) and 32GB of RAM, and running the game at 4K with the visual quality settings cranked up. DLSS is running in Performance mode.

As such, a card like the recently added GeForce RTX 3070 Ti goes from averaging 155 frames per second to 230 frames per second. And for lucky owners of a GeForce RTX 3090, they could see a performance increase from 209 frames per second all the way to 281 frames per second, to perhaps give that fancy 360Hz gaming display a proper workout.
"In Rainbow Six Siege, split-second reactions can be the difference between winning and losing. NVIDIA DLSS ensures that you’ve got maximum performance and image quality so you’ve always got victory in your sights," says  Anthony De Rochefort, 3D programmer at Ubisoft.
DLSS is an upscaling technology that leverages machine learning to ensure minimal loss of image quality. The initial implementation sometimes came at the expense of blurry images, but in our DLSS 2.0 tests, the technology has improved leaps and bounds, and is definitely worth turning on, if you have the option.
To enable it in Rainbow Six Siege, following these steps...
NVIDIA recommends selecting Quality mode for 1920x1080 and 2560x1440, and Performance mode for 3840x2160, though you are of course free to play around to see which gives you the best balance of performance and image quality. 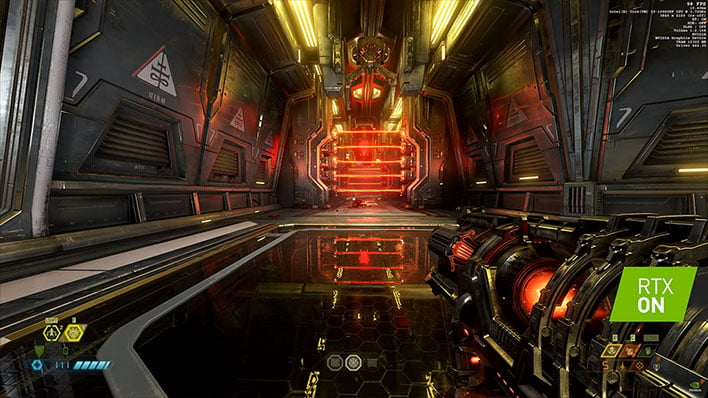 In addition to adding DLSS love to Rainbow Six Siege straight away, both DLSS and ray tracing gameplay are headed to Bethesda's hellaciously wild and fun Doom Eternal game.
"Doom is a storied game franchise, and Doom Eternal launched last year to critical acclaim and the adoration of fans. Powered by idTech, id’s incredibly fast game engine, Dopm Eternal is pushing the visual boundaries even further by adding ray-traced reflections and performance enhancing NVIDIA DLSS," NVIDIA says.
NVIDIA did not share any internal benchmarks obtained in Doom Eternal with DLSS enabled, but the prospect of ray-traced visuals and added performance is enticing. The new features will be avaiable in just over a couple weeks from now, on June 29. Good stuff, NVIDIA.