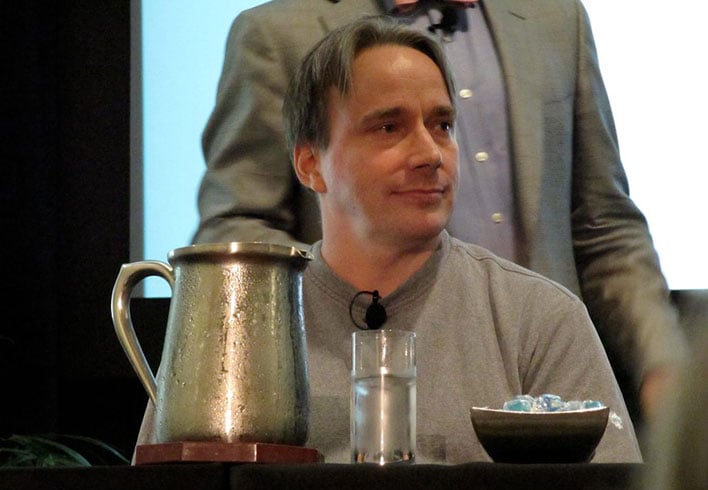 Linus Torvalds, the creator of Linux, has a history of posting angry rants on various topics. Several of them have been directed at Intel, like when he ripped the company a new one after what he felt was a lackluster response to Spectre and Meltdown CPU flaws. More recently, however, he went on a tirade against Intel, blaming the company for stifling the ECC memory market on the consumer side. While he had some harsh words for Intel, that was not the end of it—he posted some follow-up thoughts on the situation.
Before we get to those, let's talk about triggered him in the first place. In a Linux kernel mailing thread, the topic turned to AMD's Ryzen processors supporting ECC memory, and a user commenting that it "really doesn't matter." Torvalds not only vehemently disagreed, he accused Intel of being "instrumental in killing the whole ECC industry with its horribly bad market segmentation."
He's mainly referring to Intel pushing ECC memory in server and workstation statements, but not the consumer market at large. He also said that the "arguments against ECC were always complete and utter garbage," and accused Intel of "pushing [horse manure] to consumers," only he was a bit more vulgar.

Days later, he decided to clarify some things that people "don't seem to get."
"I do not care very much about whether my system has ECC or not. That's not the issue. If I have memory errors, I am actually tech savvy enough to figure them out. Plus I end up using fairly 'safe' machines—I make sure my power delivery is over-specced, I live basically at sea level, I don't overclock anything, and I buy reputable stuff," Torvalds clarified.
Torvalds appears under the impression that people think his original rant was motivated by his own needs in the PC space. He also noted that he's "seen some ridiculous garbage" in the ongoing thread, liker gamers not wanting ECC.
"That's total driver. Gamers that build high-end gaming workstations for overclocking should be some of the main target of ECC, because without ECC you don't really if—and how high—you can safely overclock your RAM," Torvalds wrote.
He also doubled down on placing the blame on Intel, saying it's because of the company's policies that ECC RAM in the mass market is so rare.
"The only reason Intel says 'ECC is for servers and embedded' is because Intel marketing people have convinced the powers that be that they can sell otherwise inferior chips for a higher price by enabling ECC functionality," Torvalds added.

This won't matter much when DDR5 memory becomes mainstream, because ECC is part of the next-gen memory standard. In the meantime, Torvalds apparently has plenty to say on the matter.