Intel has some new workstation processors in the pipeline, including its Xeon W-1300 series powered by its recently launched Rocket Lake-S architecture. This is depicted on a recently leaked roadmap that is making the rounds, along with what comes after that—another round of Xeon W processors, but based on Intel's upcoming Alder Lake-S processors, including a 16-core model.

There are some caveats to be aware of, as it pertains to the roadmap. For one, Intel has not yet announced either of these products, and being a leak, there is always the chance it ends up being fake, or otherwise wrong. Plans can change, and to that end, assuming the roadmap is real, it appears to be an older one, as it shows Rocket Lake-S launching in 2020. It only came out a couple of weeks ago.
In any event, here's a look at the leaked roadmap... 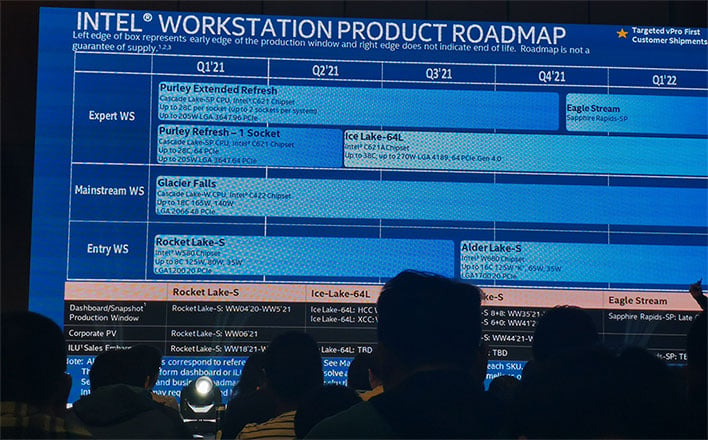 According to the roadmap, Intel will release a Xeon W-1400 series based on its hybrid Alder Lake-S architecture in the third quarter of this year. Or at least that was perhaps the plan at one point. We would be surprised if that ended up happening, as consumer desktop launches usually come first, and Alder Lake-S will not arrive until closer to the end of year.
Whether the time frame is accurate or has shifted, Alder Lake-S is bound for entry-level workstations, with a new Intel W680 chipset in tow, serving up 20 PCI Express lanes. The upcoming chips will also utilize an LGA 1700 socket and come in 35W, 65W, and 125W power envelopes, the latter of which will be reserved for Intel's K-series models.
The bottom of the slide shows a couple of core configurations, including 8+8 and 6+0. Keeping in mind that Alder Lake is a hybrid architecture pairing high performance cores with power efficient cores (similar in philosophy to Arm's big.LITTLE approach), the 8+8 setup means it will have eight of each type of cores (for a total of 16 cores), while the 6+0 denotes six high performance cores and no power efficient ones.
Assuming Intel keeps to the schedule outlined in the roadmap, the 8+8 model will arrive first, with plans to begin production in the 35th week, followed by the 6+0 model entering into production in the 41st week. Those have probably shifted, but even so, it's likely we will see the higher end variant hit the market before the lower-end model.
It will be interesting to see how Alder Lake fares when it arrives, not just in the workstation segment, but on consumer desktops as well. Alder Lake will feature both DDR5 and DDR4 support, and will embrace PCIe 5.0 as well, from what Intel has confirmed so far. Around the same time (probably a little later), AMD will introduce its Zen 4 lineup, with a similar set of features (minus the hybrid design).