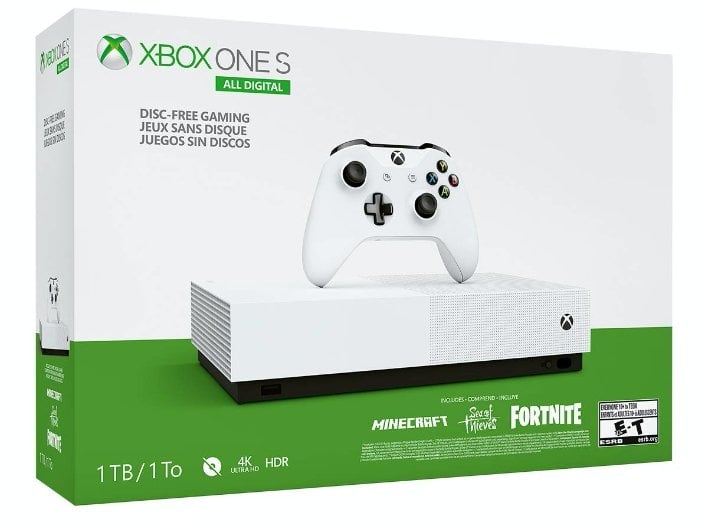 How low can it go? For those looking to get in on some Xbox One gaming action, and don’t want to spend a lot of money in the process, we’ve got an excellent deal in store for you. Microsoft first launched the Xbox One S All-Digital a little less than a year ago as a low-cost entry for those that didn’t need a Blu-ray drive.

When the console was first launched, it was priced at $249, but now that price has fallen considerably to just $139.99. This comes courtesy of an eBay Daily Deal by way of seller pro-distributing. The seller has a feedback rating of 99.2%, so you’re in good hands, and not only is the same-day shipping free, but the seller also offers free returns.

This is $10 less than the previous low that occurred back in December during the last-minute Christmas shopping rush.

As we previously mentioned, the Xbox One S All-Digital lacks a Blu-ray drive, which means that all of your games will need to be downloaded from over the internet (which is what many gamers do nowadays anyway). But the lack of an optical drive is less of a hindrance in 2020 as most enthusiasts are subscribing to numerous streaming services like Netflix, Hulu, and Disney+ (among others) or stream their home movies libraries using apps like Plex. When you also factor in Xbox Game Pass and xCloud gaming, we can see why many people may prefer to go the “cheap” route with the Xbox One S All-Digital.

The Xbox One S All-Digital has an internal 1TB HDD and comes with a single wireless controller. Also included in the box are free digital copies of Fortnite, Sea of Thieves and Minecraft.

The eBay seller currently has “limited quantities” available, so we’d suggest that you hop on this $139.99 deal sooner rather than later by clicking on the following link. We should also mention that some eBay’ers qualify for a 5% eBay Bucks promotion, which means that you’ll get $7 that you can use towards a future purchase on the site.