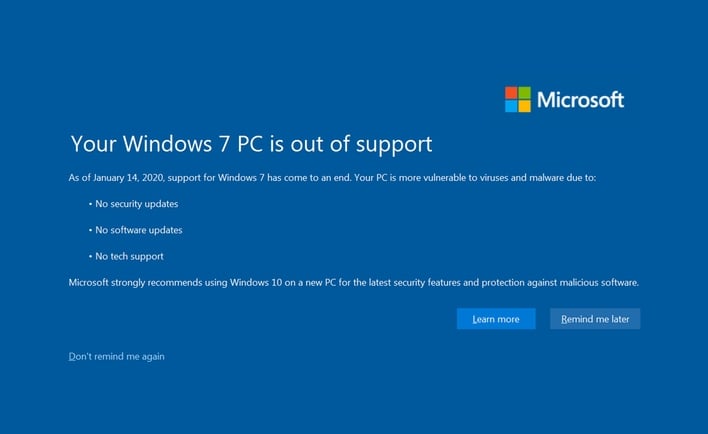 Unless you been living under a rock, then you know that Microsoft ended official extended support for Windows 7 on Tuesday. That means that Microsoft is no longer providing product updates or security patches for the operating system -- that is unless you are a corporate customer that pays a yearly per device fee for Windows 7 Extended Security Updates.

For those that have decided to stay put on Windows 7, you may have noticed a new annoyance courtesy of Microsoft. As the company promised last month, it is now relaying full-screen nag warnings in Windows 7 to prompt folks to upgrade to Windows 10. You can see the nag screen in the header image above, and the text reads:

Your Windows 7 PC is out of support

As of January 14, 2020, support for Windows 7 has come to an end. Your PC is more vulnerable to viruses and malware due to:

Microsoft enabled the ability to push these interstitial nag screen to customers with KB4530734. The company explains that the screen "will remain on the screen until you interact with it."

Microsoft is trying to quickly get its Windows 7 customers over to Windows 10, which was first launched back in 2015. Considering that Microsoft is still offering free upgrades from Windows 7 to Windows 10 -- although it doesn't publicly advertise it -- it would be wise to take advantage of the offer while it's still available.

We should also mention that even though Microsoft has ended general availability of Windows 7 extended support, it is still launching new software for the operating system. The Chromium version of Microsoft Edge launched yesterday and it will be supported on Windows 7 through at least July 2021.