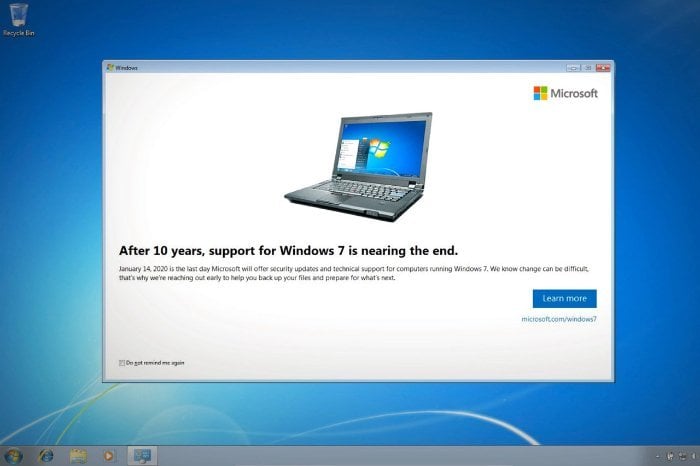 The end of extended support for Windows 7 is fast approaching, and Microsoft has been doing everything in its power to get users to upgrade to Windows 10. The most visible way that Microsoft has been nudging users has been to display pop-up nag screens encouraging them to abandon the 10-year-old operating system.

Officially, extended support ends on January 14th, 2020 -- meaning no more OS or security updates -- but Microsoft will allow enterprise customers to pay for continual updates to Windows 7. Microsoft is charging between $25 to $200 per workstation (per year) for Windows 7 Extended Security Updates (ESUs). However, community members over at My Digital Life have crafted a special software tool that in essences bypasses the key check process that Microsoft has implemented to ensure that a system is authorized to receive paid ESUs.

The software bypass, which was first noted by ZDNet, is a result of KB4528069 for Windows 7 ESU that landed back in November. Specifically, the update has one primary purpose:

This update is a test package we recommend that you deploy in your test environment. Install this update on your on-premise devices that are eligible for ESU.

Administrators are then required to provide an ESU license to ensure that systems are ready to go when the first updates arrive after the January 14th cutoff. The BypassESU tool is by no means authorized or condoned by Microsoft. In fact, we'd imagine that Microsoft is probably a bit irate about the very existence of the tool, as it would cut off an added revenue stream for customers too stubborn to upgrade to Windows 10.

With that being said, Windows 7 ESUs are not meant to be a long-term solution, and they will cease completely in 2023 -- a full 14 years after Windows 7 was first released. It's impressive that Microsoft has supported Windows 7 this long, but it's really time for businesses to start looking towards upgrading rather than paying through the nose to support an operating system that is on life support.