Do you feel that breeze? It is a shift in the winds of gaming, spurred by Microsoft's decision to join Epic Games in allowing game developers to keep a bigger share of revenue. Following last week's announcement that Microsoft is going to slash its cut of PC game sales to just 12 percent (down from 30 percent), court documents in the Epic Games lawsuit against Apple reveal the same reduced royalty rate is also headed to the Microsoft Store on Xbox.
This is a big deal, and assuming there are no strings attached, just as none exist on the PC side, the 88/12 split of revenue will apply no matter how many sales a particular game achieves. This is in contrast to Apple's reduced 15 percent royalty rate for its App Store, which applies for the first $1 million in sales, after which it bumps back up to 30 percent.
"A clear, no-strings-attached revenue share means developers can bring more games to more players and find greater commercial success from doing so," Matt Booty, Head of Xbox Game Studios, said about the PC revenue share announcement. "We're proud to empower all developers with the platform and services they need to execute their vision and provide exceptional experiences on PC."
Microsoft has not yet announced similar plans on the console side, and in a statement to The Verge, the company said, "We have no plans to change the revenue share for console games at this time." However, information contained in a court document suggests otherwise. Have a look... 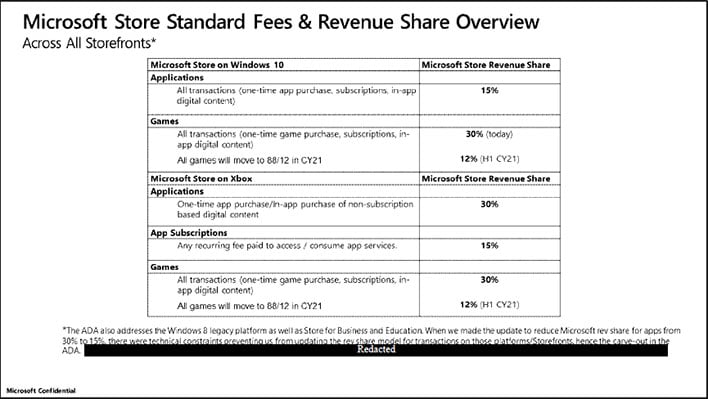 The heavily redacted document outlines Microsoft's fees for its store on both Windows 10 and Xbox, and is listed as confidential. Microsoft already announced it is slashing the fee to 12 percent on PC, and on the bottom section of the above chart, we see the company is planning to do the same thing for Xbox games, where it says, "All games will move to 88/12 in CY21."
That means the reduced royalty rate will go into effect sometime during the 2021 calendar year. The column on the right suggests it will happen in the first half of the year, so by the end of June. For reference, the adjusted rate will go into effect on PC starting August 1st.
There's also an interesting comment in the court document about streaming rights. Specifically, Microsoft writes, "There is a proposal currently under Gaming Leadership Team consideration to adopt 88/12 as a public PC games revenue share for all games in exchange for the grant of streaming rights to Microsoft." 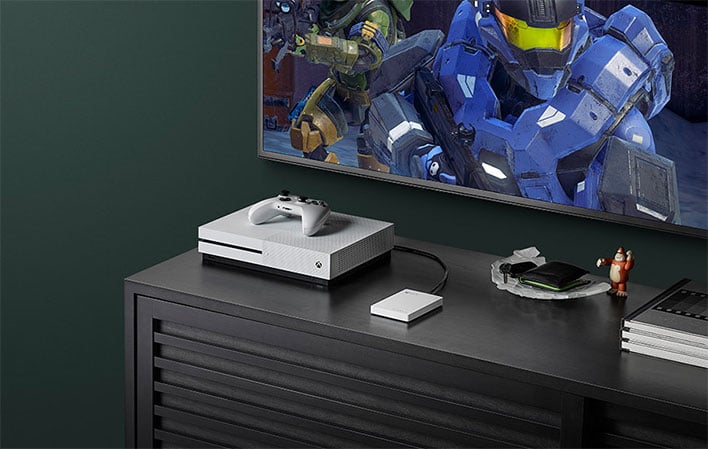 It's not clear if the proposal was approved, but it is certainly possible, with Microsoft officially on track to cut the rate to 12 percent on PC, and semi-officially on console. So, we'll have to wait and see.
Regardless, this is a major move. Regardless of how anyone feels about the Epic Games Store and its penchant for scoring exclusives, it is having an impact on the games industry. Microsoft's reduced rate that is coming to PC in August and likely Xbox around the same time matches the 12 percent cut Epic Games takes. On the PC side, that puts added pressure on Valve, which still collects 30 percent from each game sold through Steam.
"We'll continue listening to the community to ensure we're delivering on our promises, and respecting how players choose to play," Booty said last week. "This is especially true as we head into the second half of 2021, when our work across the entire PC ecosystem has the potential to come together in a way that propels the industry forward and brings great games to more gamers around the world."
And Xbox consoles too, apparently.