Microsoft has just announced that a new Microsoft Store experience will soon be available for the current family of Xbox One consoles. Rather than a minor update to the existing storefront, Microsoft says that this is a “completely rebuilt” interface that is focused on speed and ease of use.

On the speed front, Microsoft says that the new Xbox Store will load twice as fast as previous iterations, meaning that it will launch in less than two seconds. The speed benefits are not only attributed to performance improvements, but also in how quickly you can find the content that you’re looking for; be it a new game, a trailer for a TV or movie release (which are viewable inline with search results), or sale items. 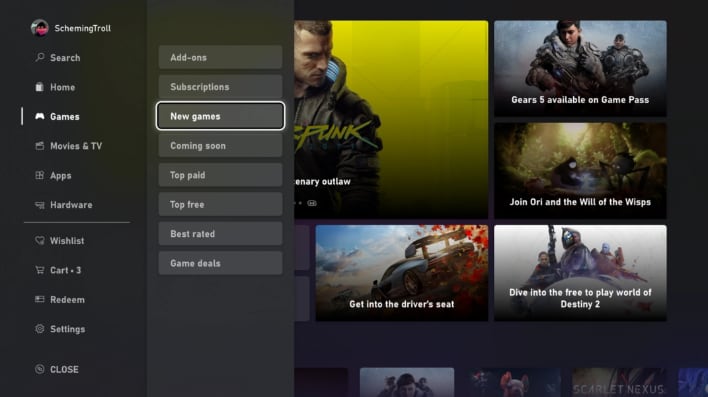 Navigational tweaks include a redesigned search engine that makes it easier to filter results, and a Wish List that is more relevant by notifying you of sales that drop the price on games you’ve been eyeing. The shopping cart has also been given a fresh coat of paint with more detailed information, while purchasing cross-generational games is easier than ever before.

Microsoft has even addressed the concerns of parents who are wary of their children having free reign of purchases and content that might not be age appropriate. “To help parents ensure that their children are interacting with appropriate content, customers must be signed in to their Xbox account before browsing,” writes Microsoft. “With this update, we ensure that content rated beyond a user’s content filter level does not appear anywhere in search or browse experiences.

“This means that a child with content filters set for an 8-year old will not be able to view content in the store that is rated for a teenager, for example.”

This new update to the Xbox Store is first being made available to Xbox Insiders (you can join here), who will gain access on August 5th. Once Insiders have had a chance to shakedown the new Xbox Store and aresatisfied with performance, Microsoft will roll out to the general public this fall.