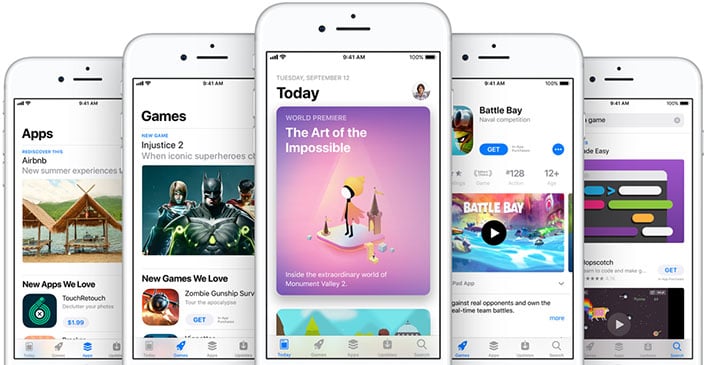 Apple is apparently getting into the holiday spirit by gifting smaller developers a reduced App Store commission rate. As part of its newly announced App Store Small Business Program, developers who earned less than $1 million in the last calendar year qualify for a 15 percent royalty rate, which represents a 50 percent reduction over Apple's normal commission fee.
"Small businesses are the backbone of our global economy and the beating heart of innovation and opportunity in communities around the world. We’re launching this program to help small business owners write the next chapter of creativity and prosperity on the App Store, and to build the kind of quality apps our customers love," said Tim Cook, Apple’s CEO.

Apple maintains that the App Store is an "engine of economic growth like none other," hence why it is deserving of a hefty commission for both apps sold its in marketplace, and money collected from in-game purchases. This recently became a point of contention between Apple and Epic Games, and specifically the 30 percent royalty rate tied to Fortnite.
Epic Games updated Fortnite to accept in-game purchases directly, effectively sidestepping Apple's commission. This resulted in Apple banning Fortnite from the App Store, and the two sides will duke it out in court. Well, maybe.
Apple's move is a savvy one in part because it gives Epic Games an out, so to speak. Epic Games is fighting an uphill battle, but could potentially save face by dropping its lawsuit and claiming that this reduced rate for smaller developers is what it was really after in the first place. A sort of win-win, if you will, except Epic Games will still be on the hook for 30 percent of revenue tied to Fortnite in the App Store, because it pulls in more than $1 million per year.
Full detail of the new program will be revealed in December, but in the meantime, Apple has provided a rundown of the essential bits...
The move also comes as Apple faces increased regulatory scrutiny over its App Store fees and policies. In June, for example, the European Commission formally opened an antitrust investigation to assess if Apple's policies violate EU competition rules. It will be interesting to see if this reduced rate for smaller developers quells those concerns.
Likewise, I'm curious to see if Google responds with a similar arrangement for its Play Store, which also collects a 30 percent royalty.