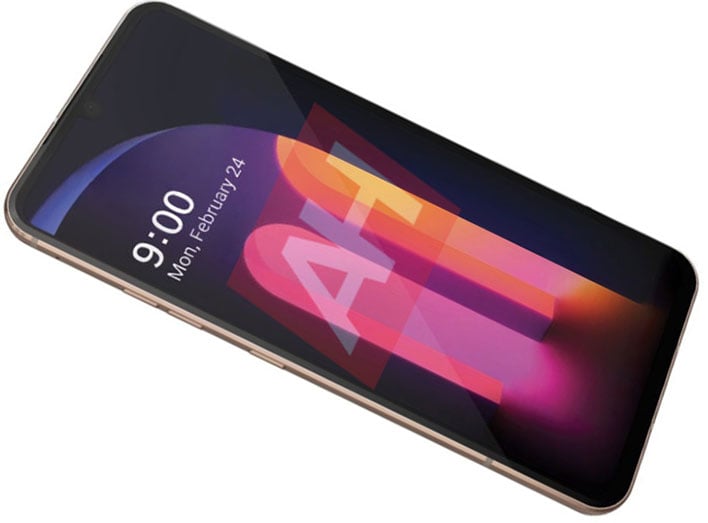 It looks as though LG had been gearing up to formally introduce its next-generation flagship phone, the V60 ThinQ, at Mobile World Congress (MWC), but that was before the Coronavirus outbreak threw a wrench into those plans. MWC was cancelled after several vendors pulled out of the show. So, where does that leave the V60 ThinQ?
That's a good question. While we await an answer, what appears to be the first leaked render of the V60 ThinQ has emerged, courtesy of Android Headlines. As seen in the image above, the supposed render displays Monday, February 24, as the date. Before it was cancelled, MWC was scheduled to run from February 24-27.
Maybe LG will still announced the V60 ThinQ on Monday, maybe not. Either way, we can discern some details by looking at the render.
For one, we see a mostly all-screen design on the front. The front-facing camera resides in a teardrop notch at the top. This is similar in style to the G8X ThinQ, rather than the current (soon-to-be previous) generation V50 ThinQ.
The render only shows the front of the device, though a previous leak outlined the possible rear camera configuration on the V60 ThinQ. Supposedly snagged from a promotional video, the previously leaked images highlighted four rear cameras, along with a 5,000 mAh battery, USB-C port, 3.5mm headphone port, and bottom-firing speakers.
More than likely, the V60 ThinQ will sport 5G connectivity. It will also almost definitely boast a Qualcomm Snadragon 865 system-on-chip (SoC). Less certain is the RAM allotment, and same goes storage. However, previous leaks have pointed to 8GB of RAM, and at least 128GB of built-in storage seems reasonable (along with a micro SD card slot).
Stay tuned, as a late February launch is probably still in the cards.
Thumbnail/Top Image Source: Android Headlines