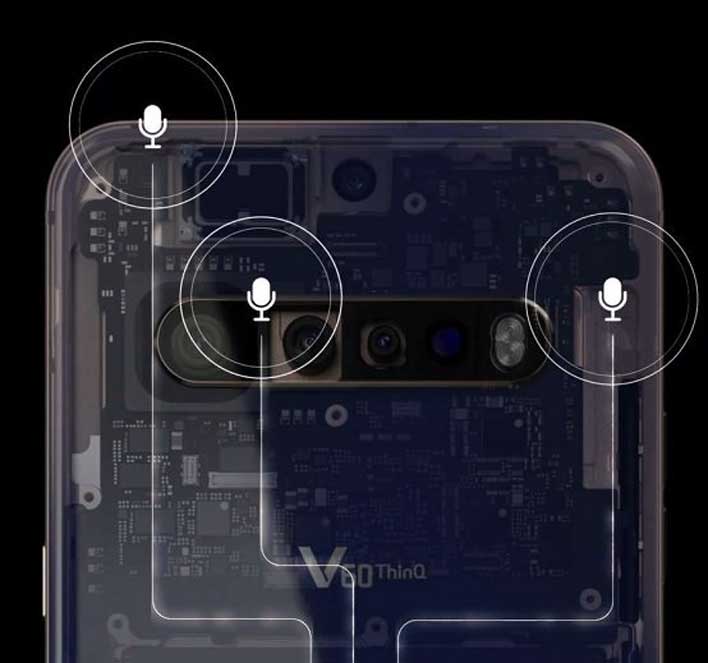 An image has leaked that claims to be a promotional shot of the upcoming LG V60 ThinQ smartphone. The smartphone was expected to launch at MWC 2020, however,  LG opted to skip the show altogether this year due to the coronavirus outbreak. The image is said to have come from a promotional video that was to be shown during MWC 2020 when the phone debuted.

The leaked image shows off the four microphones that the smartphone will have inside. The device will also have four rear cameras, a 5,000 mAh battery, USB-C port, 3.5mm headphone port, and bottom-firing speakers. While it's not clear, the assumptions it has the V60 will have a fingerprint scanner under the front screen.

The image shows what looks to be dedicated volume and Google Assistant buttons on the left side. It appears that the button arrangement is the same as it was on the V50S ThinQ. There is a bit of confusion in rumors for the V60 ThinQ as OnLeaks, the source of the image here, originally though the device would be called the G9 from past leaks. While this image is clearly labeled V60 ThinQ, the thought is that the past leak wasn't the G9 but was the V60.

If that is accurate, the hardware inside the device is expected to include a Snapdragon 865 SoC, which means standard 5G wireless support. The display is expected to be in the 6.7 to 6.9-inch realm. It's tipped to launch with Android 10 as the OS. As for a launch window for the device, the assumption is that the smartphone will launch soon since it was going to debut at MWC 2020 before LG decided to pull out of the show.

The last time we talked about an LG device was when the G8X ThinQ was unveiled in October, 2019 with dual screens.