When Intel first announced the impending arrival of its Comet Lake-H mobile processors, the company confirmed that there would be SKUs available with 5GHz+ turbo clocks. Those are quite impressive frequencies for mobile processors; especially ones that are built on Intel's venerable 14nm process node.

Today, a fresh leak is giving us some insight into just how far these chips will be able to boost their clocks. According to a leaked slide that was posted by momomo_us (and apparently subsequently removed) the maximum turbo clock for these Comet Lake-H processors will be 5.3GHz. 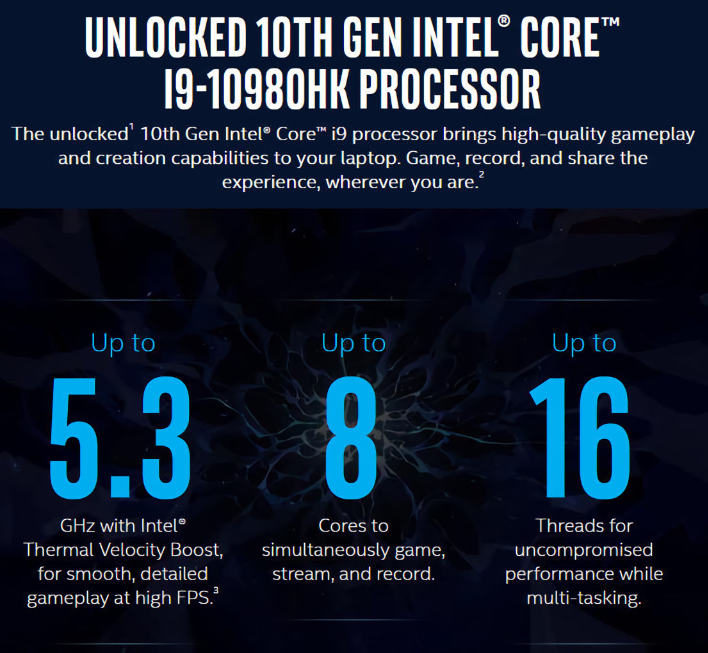 That 5.3GHz turbo clock will reportedly be reserved for the flagship Core i9-10980HK, which will feature 8 cores capable of executing 16 threads. And if the reporting is accurate, hitting these 5.3GHz clocks won't be a common occurrence. Instead, it will be applicable only under Intel's Thermal Velocity Boost guidelines. In other words, certain thermal and power thresholds must be met to eke out that maximum clock.

Intel is rumored to be launching the new Comet Lake-H family on April 2nd, but we don't have any official confirmation from the company on that date. NVIDIA is also rumored to be making a GeForce RTX Super Mobility announcement on the same day, so this could be a big week for mobile gamers. We've previously seen the Core i9-10980HK paired with a GeForce RTX 2800 Super (Max-Q) in a leaked Ashes of the Singularity benchmark back in mid-February. There have also been leaks of an ASUS gaming laptop featuring a Core i9-10880H processor and a GeForce RTX 2080 Super GPU

With that being said, Intel's new Comet Lake-H family will be going up against AMD's newly launched Ryzen 4000 Zen 2 family of processors. Like Comet Lake-H, Ryzen 4000 processors will be available in up to 8-core/16-thread configurations. The most potent member of the family is the Ryzen 9 4900H, which has base/boost clocks of 3.3GHz and 4.4GHs respectively while operating within a 45W TDP. The chip also includes an integrated Vega 8 GPU, but we have the feeling that most gaming laptops will be paired with a discrete Radeon RX Navi or GeForce GTX/RTX GPU.